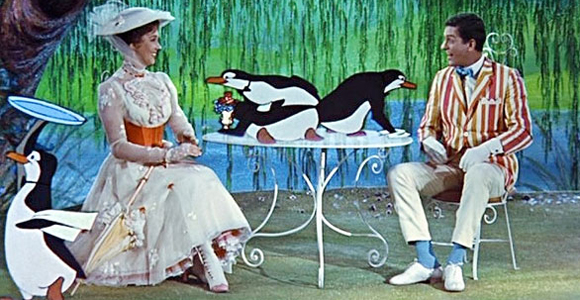 Australian novelist, actress, and journalist, Pamela Lyndon Travers is best known for writing the classic novels starring Mary Poppins. Her work went on to become a major film from Walt Disney that was tremendously successful at the box office and went on to win five Academy Awards. Now, a undeveloped screenplay from last year about the author and her issues with the company during the making of the film may be making it’s way to theaters itself with Tom Hanks and Meryl Streep in starring roles.

Travers was born Helen Lyndon Goff in 1899  and published poems as a teenager under her original name. As an actress in a traveling company performing Shakespeare she took on the stage name Pamela Lyndon Travers but it was when she moved to England in 1924 that she took the shortned pen name P.L Travers. She deeply admired Peter Pan writer J.M. Barrie and actually had his adopted son (and model for Pan), Peter Llewelyn Davies, as her first publisher.

She published Mary Poppins in 1934 and went on to write seven more novels about the famous nanny. In 1964, Disney released the musical adaptation of the books in theaters but it wasn’t a smooth road for them or Travers. She served as an advisor on the film but didn’t care for the music, hated how they diluted her character and really, really didn’t like the use of animation (one of my favorite parts of the film). As a result, she refused to sell any other rights to Disney and left strict stipulations in her will for the stage musical currently on Broadway. Now we may get to see what actually happened all those years ago, or at least a version of it.

“[Disney] is close to picking up Saving Mr. Banks, Kelly Marcel’s 2011 Black List script about Walt Disney‘s 14-year effort to persuade author P.L. Travers to sell the movie rights to her tale,” according to /Film. The Black List is a list of the best unproduced screenplays of the year as voted on by of Hollywood executives, agency professionals, and high-level assistants. The list has been compiled by studio executive Franklin Leonard since 2004. Juno was one film listed in the past and last year The Hunger Games and Snow White and the Huntsman made the list.

“Marcel’s fact-based script centers around Travers’ deeply personal connection to her books,” writes /Film. “Mary Poppins contained elements of Travers’ own real-life hardships and her relationship with her father, who passed away when she was a child. Travers was therefore reluctant to hand over the rights, fearing that Disney couldn’t do her story justice, but eventully gave in after years of wheedling.”

They say that Hanks and Streep are rumored to be going for the leads in the proposed film. “Hanks is rumored to be considering the role of Disney, while Streep is circling the part of Travers,” says /Film. “With that level of talent already interested in the picture, I wouldn’t be surprised to see Disney pushing this as a possible Oscar contender once the pieces fall into place.”

Of course as /Film points out, the very fact that this project would be produced by Disney means we may not get a fair and balanced account of what happened but I have a feeling it will be a compelling story no matter what.