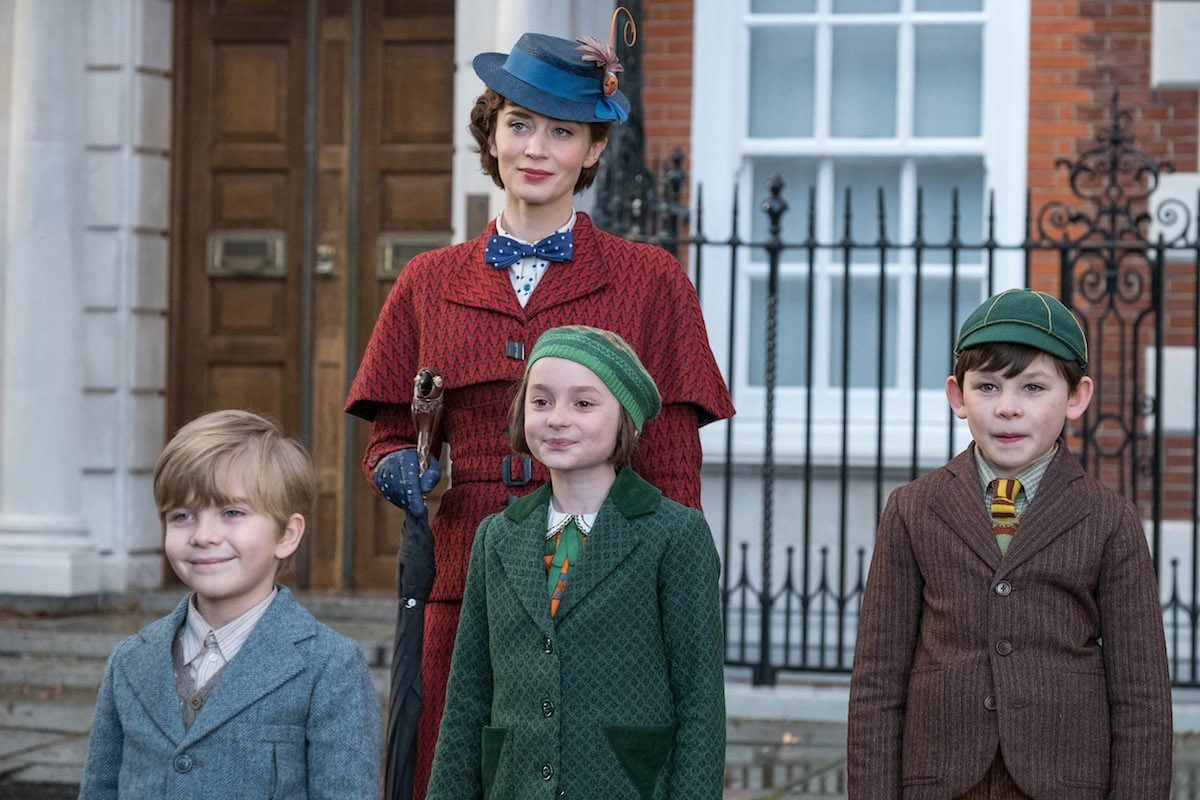 As we left the Mary Poppins Returns screening, I asked my friend what she thought. “It was a good Mary Poppins tribute band,” she said.

If you have kids, you’re probably going to take them to see Mary Poppins Returns. If, like me, the first movie was an absolute favorite of your childhood and still occupies space in your mind and heart, you are probably going to see Mary Poppins Returns. I would not dissuade anyone from seeing this whimsically over-the-top film, an attempt at the original Mary Poppins magic turned up past eleven. But I wish I could say that I loved it—and that the classification of it as a “tribute band” didn’t feel so apt.

First, the good: the acting is fantastic. Emily Blunt is definitely not doing a Julie Andrews impression; she makes Mary her own, and her Mary is equal parts perfectly prim and deliciously rule-breaking and high-kicking. Emily Mortimer and my perpetual fave Ben Whishaw are excellent as the grown-up Jane and Michael Banks, and the kids are winning and well-cast.

I’d worried about Lin-Manuel Miranda’s casting, because while Miranda is a genius, singing has never been his strongest suit. But beyond an aggressively bad British accent—it’s so bad it must be intentionally bad, an homage to Dick Van Dyke’s infamous Cockney phrasing—Miranda radiates happiness throughout the film and is a joy to watch, while also executing some spry dance moves.

The costumes are sumptuous, the sets and special effects are mostly captivating, and there are some cameos that will make you smile a lot. The music can be hit-or-miss, and there’s nothing likely to enter the lexicon like “Supercalifragilisticexpialidocious” or “A Spoon Full of Sugar” or “Let’s Go Fly a Kite,” but I couldn’t keep tears from my eyes during the wrenching “The Place Where the Lost Things Go,” and other songs may find you tapping your toe.

There’s heavy stuff here. The Banks children have lost their mother, and Michael his beloved wife; the kids have had to grow up much too fast. Jane Banks is a labor activist and there’s some commentary on the downtrodden worker. The movie’s vaguely sketched politics are as reflective of our own time and the massive divide between haves and have-nots as its setting during the Depression. The lesson of the mad vaudeville song-and-dance “The Cover Is Not the Book” is important for kids to learn—that people are not always what they seem, and may be wolves in sheep’s clothing. 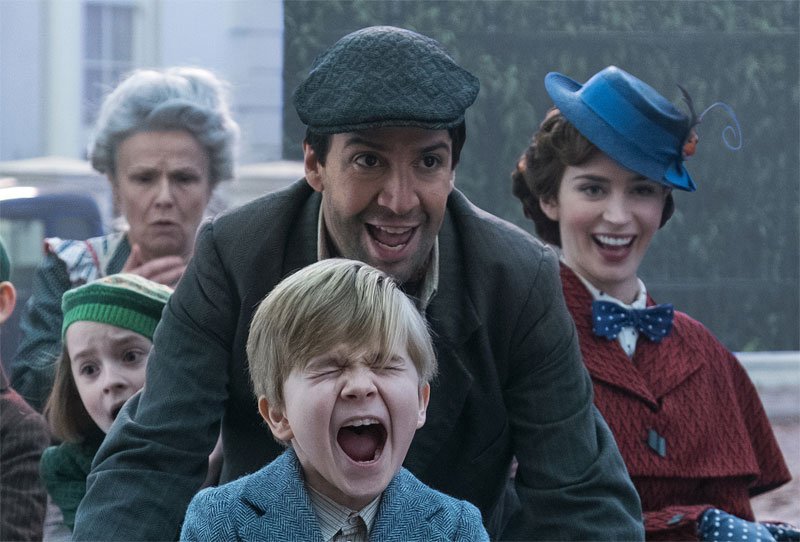 The problem is that none of this hits with the emotional impact nor the creativity that it could. It often feels that the new film is laid over a blueprint of the old, and it zigzags around, trying to hit all of the old beats but upping the production ante on them to justify the retread. We have a clean-up song that takes place underwater, a Mary’s-wacky-relative performance that features Meryl Streep, an animated/live-action sequence that lasts for about a year, and the classic chimney sweep number replaced with a lamplighters’ all-out spectacle complete with zooming bike stunts.

Mary Poppins Returns beats us over the head with nostalgia for the first movie, with the subtlety of being struck by Mary’s talking parrot umbrella (the umbrella is here too). That’s where the “tribute band” idea comes in. The movie is performing the sequences of the first, but even the best tribute band is no substitute for the real thing. At the same time, the constant references and homages will make little sense to a new generation of young viewers who may not have seen the first film.

I kept telling myself throughout the movie that it wasn’t made for people my age, and I kept thinking that surely kids will view the antics on screen as magical. Maybe I’m just too old and jaded for the movie to play properly to me. I have no doubt that kids will have much more fun. But that doesn’t stop me from wishing Mary Poppins Returns—made with so much time, energy, money, and high production value—also trusted its audience more to distance itself from the original and create something fresh.

Returning to the Banks household in the same house on the same street, with the Fidelity Fiduciary Bank playing a villainous role again (when it’s not saving the day? There’s some seriously mixed messaging about financial markets herein), giving Mary a charming working-class sidekick, flying a kite as an essential plot point and prop—the similarities and attempted winks are endless, yet this movie is nowhere near as clever or tongue-in-cheek. 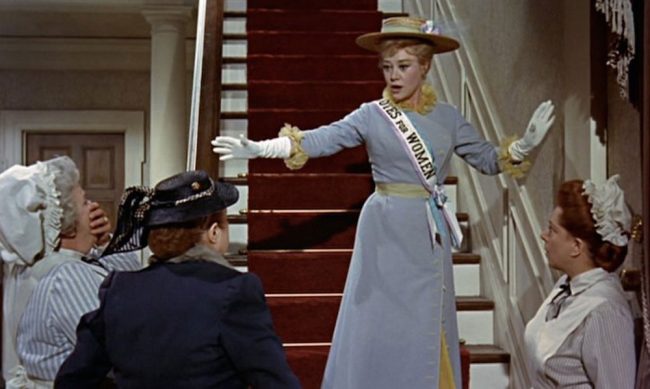 The sly and cutting cultural commentary in Mary Poppins that came with songs like “Sister Suffragette,” “A British Bank (The Life I Lead),” “Feed the Birds,” “Fidelity Fiduciary Bank” is not to be found here, though Michael’s tuppence do make a ridiculous appearance.

Did I understand the politics behind “Sister Suffragette” when I was five? Of course not—but it made an impression, as did the overall messaging of Mary Poppins to value family over money and greed. The message of Mary Poppins Returns seems to be that evil banks will prey upon failed artists and you’re screwed unless a powerful witch descends from the sky to save you.

The worst part of the film may be its arbitrary “deadline” that all of the denouement’s drama hinges on. Racing against the clock—and literally turning back time—the whole thing is overdone and unnecessary, a set-up more appropriate to a superhero or action movie. The true magic of Mary Poppins has always been rooted in the recognizable humanity of its characters, who just need a little nudge from a special lady to find their way. Mary Poppins Returns does nothing small-scale, and that nudge here sometimes feels like shoving.

This is still a beautiful movie wrought with obvious love and care, and perhaps nothing created today could approach how deeply carved Mary Poppins is into my soul. It’s probable that kids will feel the same way about Mary Poppins Returns as I did when I was five. But I hope they will see the original first to understand why this tribute band had to play at all.