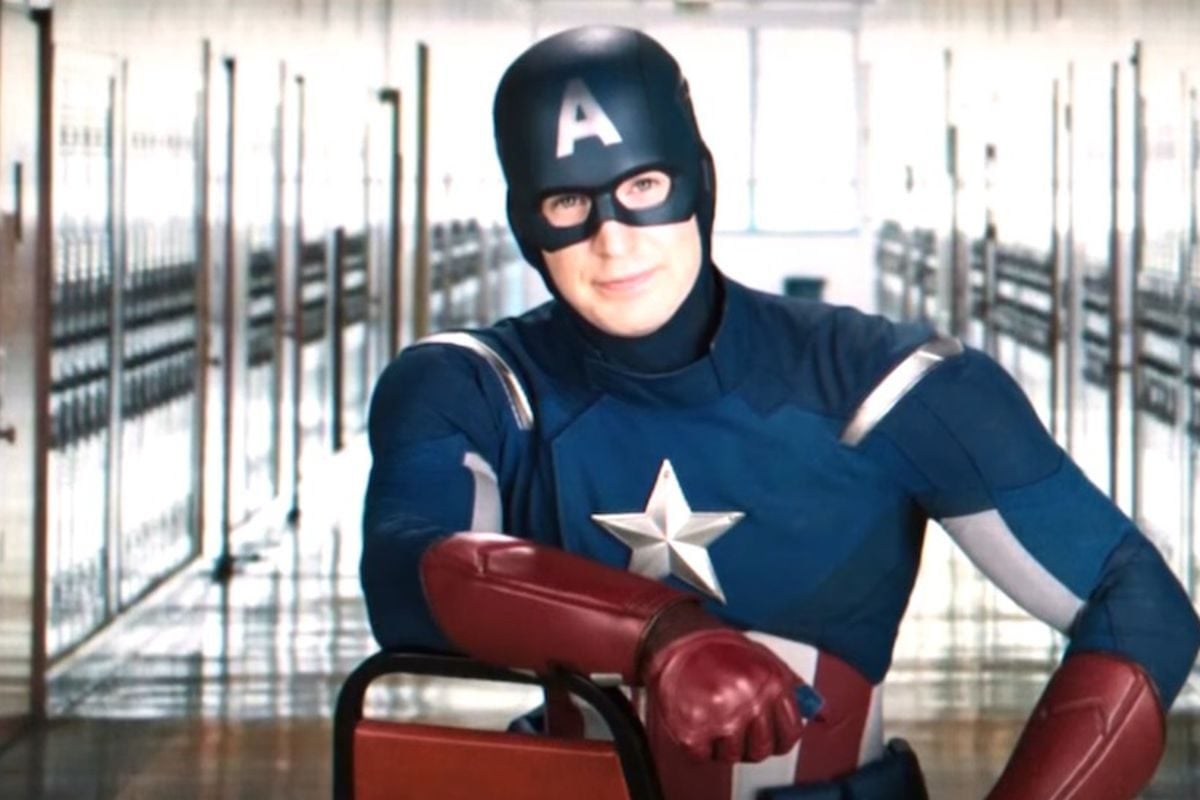 So. You love the Avengers movies, and you’re sad that it’s over.

(This article is Avengers: Endgame spoiler-free, although wade into the comments at your own peril …)

While all the Avengers were there for Endgame, not every Avenger got an origin story in the Marvel Cinematic Universe. Fortunately, the films aren’t the only place you can find the Avengers, and when it comes to comic book Avengers, my fav is definitely Hawkeye. He doesn’t have a farm or a family in the comics. He’s basically sort of a hot mess (in like an endearing, heartfelt kind of way), and he’s often accompanied by his protégé, Kate Bishop. 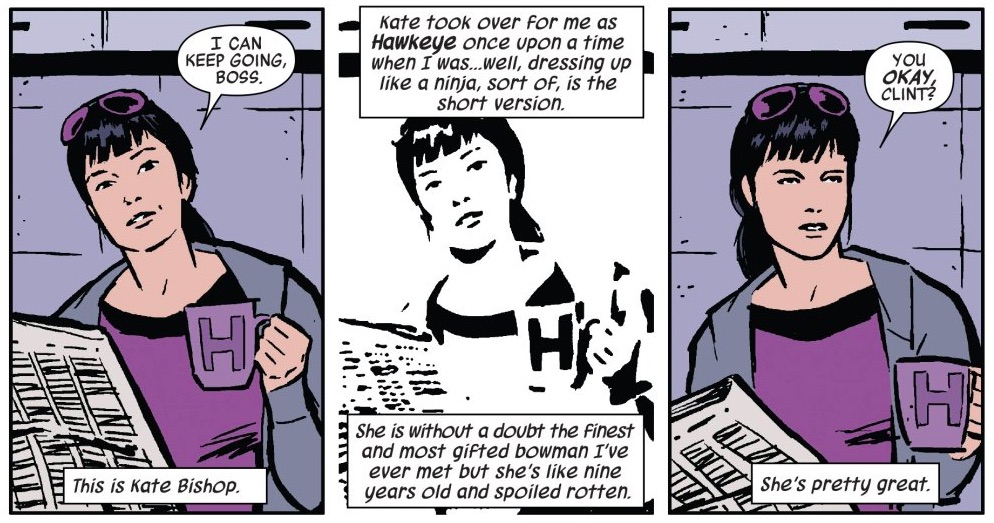 The Hawkeyes feature in some of my favorite Avengers titles, which tend to be fun and a little bit weird, and you should definitely check them out if you need some cheering up after Endgame.

This is without a doubt one of my favorite comic books of all time, and although it’s technically about what Clint Barton gets up to when he’s not being an Avenger (I mean, Tony Stark shows up to help Clint hook up his television, so they’re around), it’s essential to any Hawkeye-themed Avengers recommendation list. If you were ever that person who had ten AO3 tabs open to Avengers fanfic that involved everyone living together in the tower, or coffee shop AUs, or “What really happened in Budapest” stories, you’ll probably enjoy the human disaster version of comics-Hawkeye that stems from this run. 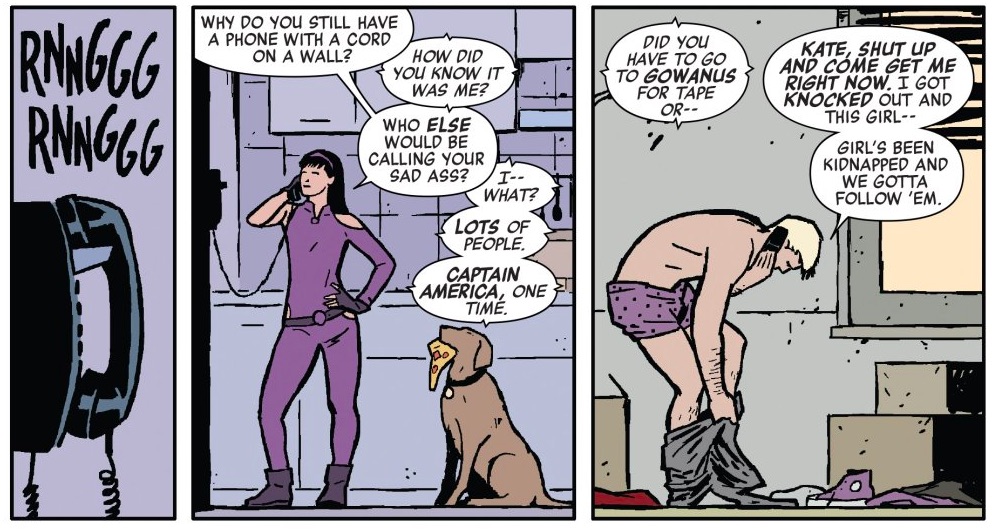 This series also features some of my favorite artwork in comics, with innovative visual storytelling through graphic compositions, smart lettering by Chris Eliopoulos, and incredibly well-edited color palettes. There’s an issue told entirely from the dog’s perspective, a silent issue that highlights Clint’s deafness, and an entire volume where Kate takes a little detour out to the West Coast (with guest artists Annie Wu and Javier Pulido).

Ales Kot and Michael Walsh’s Secret Avengers isn’t exactly Hawkeye-centric, but it still has some choice Clint Barton moments. He’s part of a team run by S.H.I.E.L.D. agent Maria Hill, whose mission is to deal with things that may be a little too problematic for the mainstream Avengers (or at least, for their PR team). MCU fans will recognize not only Hill and Barton, but Nick Fury, Phil Coulson, and Black Widow. Sir-Not-Appearing-In-Those-Films (but you still probably know him) Deadpool even shows up in vol. 2.

Secret Avengers will also acquaint readers with M.O.D.O.K. (Mental/Mobile/Mechanized Organism Designed Only for Killing). Is he a good guy? Is he a bad guy? Is he … even a person at all? Regardless of the answers to these questions, one thing is clear: he just wants someone to love him. Same, M.O.D.O.K. Same. 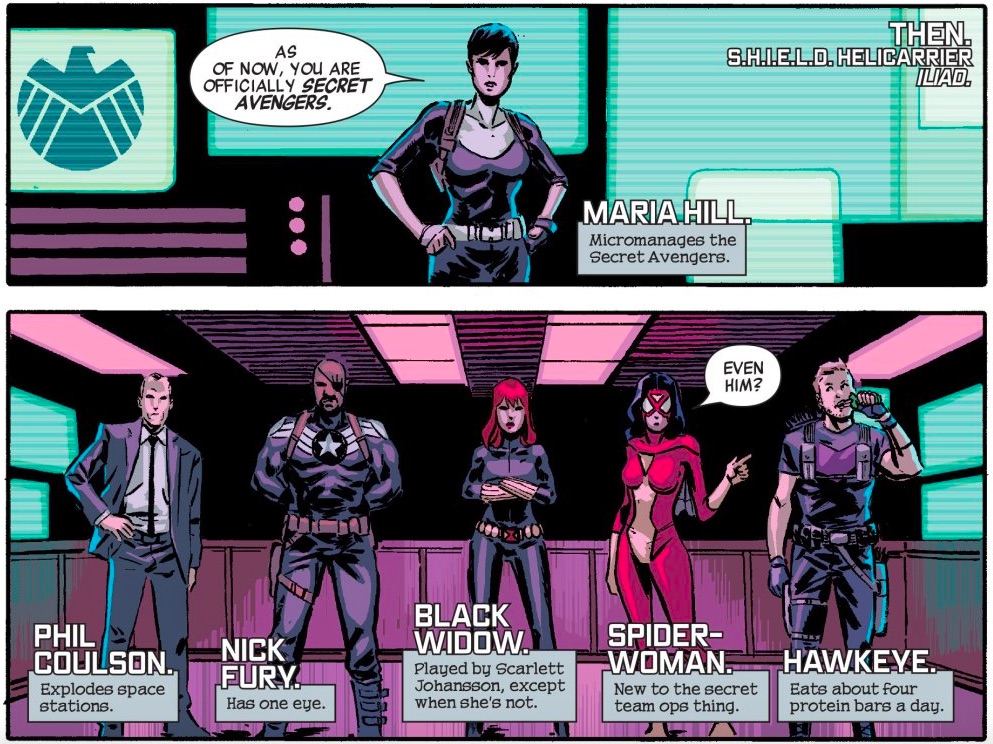 This book is always my go-to recommendation for anyone who enjoys a little weirdness in their superhero stories, and again, the artwork is absolutely gorgeous. Walsh’s calligraphic inking style is ideal for the dynamism inherent in comic books, and Matt Wilson is a basically coloring rock star.

In this run of Young Avengers, Kate Bishop is part of a superhero team that mostly hasn’t been seen in the MCU, with one notable exception. Loki apologists (hi, friends) will be delighted to see that the god of mischief is deep into a redemption arc he’s struggling to fulfill. Having previously been killed and reincarnated into the body of a kid (check out Gillen’s run on Journey Into Mystery for more on that), it occurs to Loki that, for all that he’s meant to be the personification of chaos, being a villain all the time is a bit predictable. He’s still very Loki but, you know, at least he tries.

Kate and Loki superhero along with Kree hottie Noh-Varr, interdimensional kicker-of-butt Miss America Chavez, former mutant Prodigy, and angsty lovers Hulkling (a Kree-Skrull hybrid) and demiurge Wiccan. (Wiccan’s reality-warping powers are similar to those of Scarlet Witch. Their relationship in the comics is complicated, don’t worry about it!) Jamie McKelvie does some amazing things with panel layouts because, well … you know how, when you’re a teenager, it feels like all of your dramas are so vast and complex that they’re playing out across multiple planes of existence? In Young Avengers, that’s exactly what happens …

The Hawkeyes are together again in this recent run of West Coast Avengers. Kate has cut ties with her wealthy (and possibly evil?) father and moved out west. She’s trying to lead a team of Santa Monica-based superheroes, but it’s hard when you don’t have any cash. Enter Quentin Quire, former telepath with the X-Men and definitely not a complete a-hole. He agrees to join (and more importantly, fund) the team in exchange for being allowed to invite a documentary/reality show film crew to follow them around.

Let’s just say that when the most responsible adult-y adult on your team is Clint Barton, you are definitely hanging by a thread. At least America Chavez is around to punch things!

This is a story about being out on your own and trying to do the right thing, wrapped in an Avengers book. Also? I actually kind of feel bad for M.O.D.O.K. The poor guy (floating head thingy?) really does just seem to want … love? Friends? I feel that. Also, I really miss L.A.

What did you think of Hawkeye’s role in Endgame? How did you like his haircut? Do you have some favorite comics you’d add to this list? Drop ‘em in the comments!

Tia Vasiliou is a senior digital editor and content specialist at comiXology. You can find her on Twitter @PortraitofMmeX