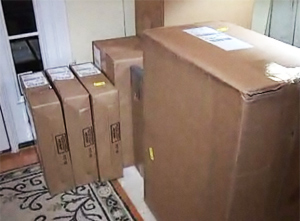 An unlucky man from Johnstown, Ohio came to find that his computer had broken. In order to get it fixed, he decided he would ship it off to Sony for repairs. As per their instructions, once he contacted him, he patiently waited for them to send him a return label that he could use to mail his broken computer. They mailed him some boxes alright, the problem was that they were filled with other people’s broken computers.

After receiving a call from a customer who believed he was a Sony technician, the man called Sony to resolve the issue. He suspected that perhaps his address had merely been swapped with someone else’s; in actuality, it was a little worse. Apparently, Sony had begun printing his address on the return labels they were sending to other customers with broken computers. Sony assured him they would remedy the situation, but that there were at least 5 more computers that were already in transit. Hope he’s got some storage space.

(NBC4i via The Consumerist)