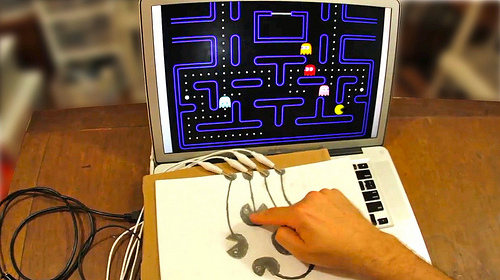 Ever wish that you could play bananas like they were a piano? OK, in all likelihood that particular wish hasn’t crossed your mind before—but now that the idea’s been presented to you, look me in the eye (er, screen?) and tell me that doesn’t sound awesome.

Well, with MaKey MaKey (“An Invention Kit For Everyone”), doing just that is now possible, as is rigging up any number of objects (even people) to control your keyboard. By clipping everyday objects to the circuit board with alligator clips, you can… well, just check out the video below, unless for some reason you don’t want to see Super Mario Bros being played with a controller made of Play-Doh. (Why wouldn’t you?)

MIT graduate students Jay Silver and Eric Rosenbaum are the minds behind MaKey MaKey; veterans of the invention kit trade, the duo’s previous projects include Drawdio, a little piece of “circuit-craft” that you can attach to a pencil and then play pretty much any object like a musical instrument, and Singing Fingers (“Finger Paint with Sound”).

With their newest project, though, they’ve really seen their brand of easy-to-use hardware-based invention kits take off; a Kickstarter campaign to raise money for manufacturing the MaKey MaKey for purchase has already raised nearly $350,000, over 13 times their original goal. A lot of people really want one of these things. And who can blame them? You could use one to get a whole bunch of action figures together and use them to play the Doctor Who theme. Just sayin’.