Magic: The Gathering Exclusive: The Two New Kaya Cards Coming to “War of the Spark,” and a Chat With the Creative Team 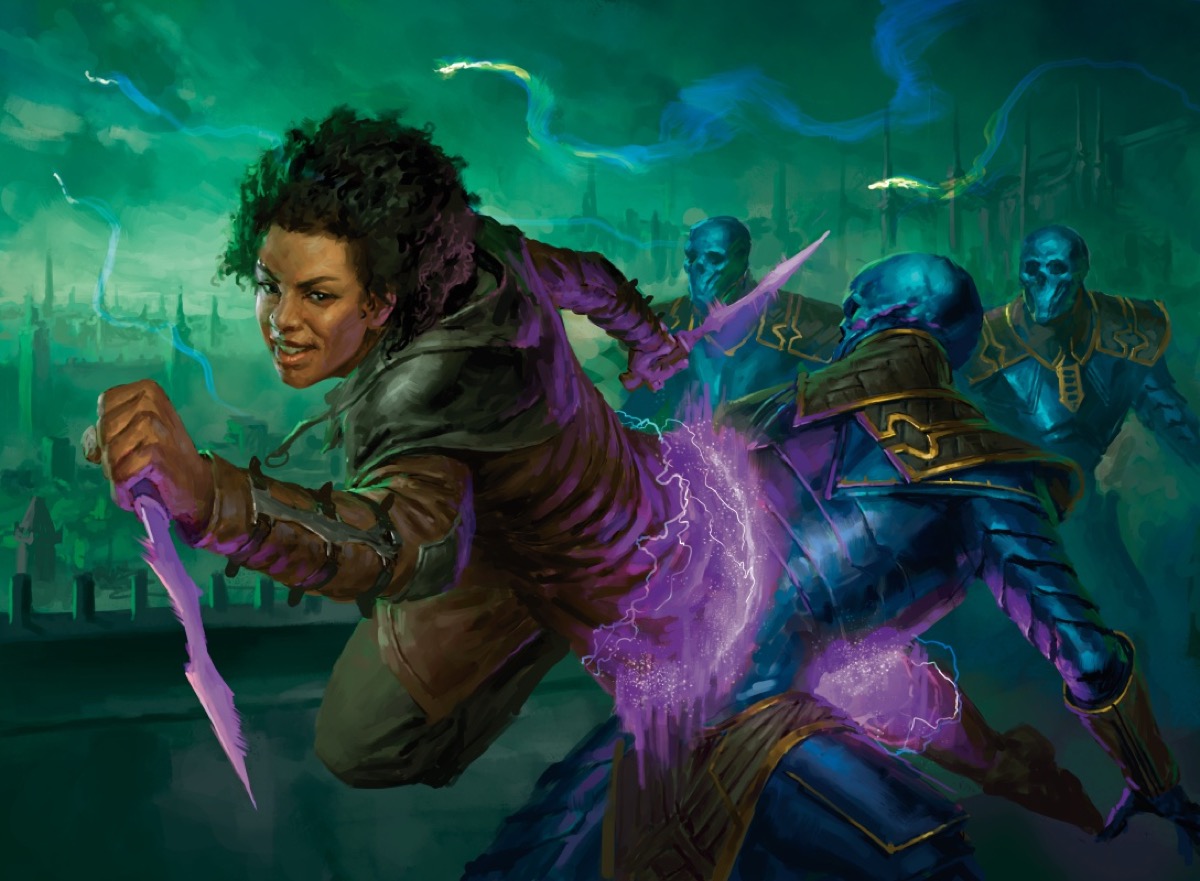 Yesterday at PAX, the trailer for War of the Spark was unveiled, with personal favorite Liliana attempting to reclaim her destiny from the dragon god Planeswalker Nicol Bolas. This new set will include 36 new planeswalker cards (37, including the Buy-a-Box promo), and one of those will be the character of Kaya, who was first introduced in Conspiracy and has continued to play a major role in Ravnica and the Nicol Bolas story.

We had the opportunity to speak with Cynthia Sheppard, Magic: The Gathering’s senior art director; Greg Weisman, author of War of the Spark: Ravnica; and Glenn Jones, Magic Game Designer, about an exclusive look at Kaya’s new cards and teases about her storyline.

TMS: Kaya was introduced in Conspiracy and has been a major player in the Ravnica storyline. She stands out as a Black female Planeswalker and has a super compelling story as a rogue with a heart of gold sometimes. How did you come up with her backstory and character design?

Cynthia Sheppard:“Kelly Digges, who worked on developing Kaya during his time at Wizards of the Coast, was always a proponent of consulting with people whose real-life experiences relate to the character’s. He worked with author Monique Jones on Kaya’s backstory, and she gave some keen insight about that in an article published at the time.

I worked on her visual design with Kelly and Jeremy Jarvis. Her natural black hair was a hugely important feature, as Kelly had noted from his conversations with Monique. She was our “rogue in the city”—her costuming was meant to draw little attention to her activities in the luxuriant streets or secret alleys of Fiora, and minimize the threat of her ghost-daggers when she wasn’t using them. 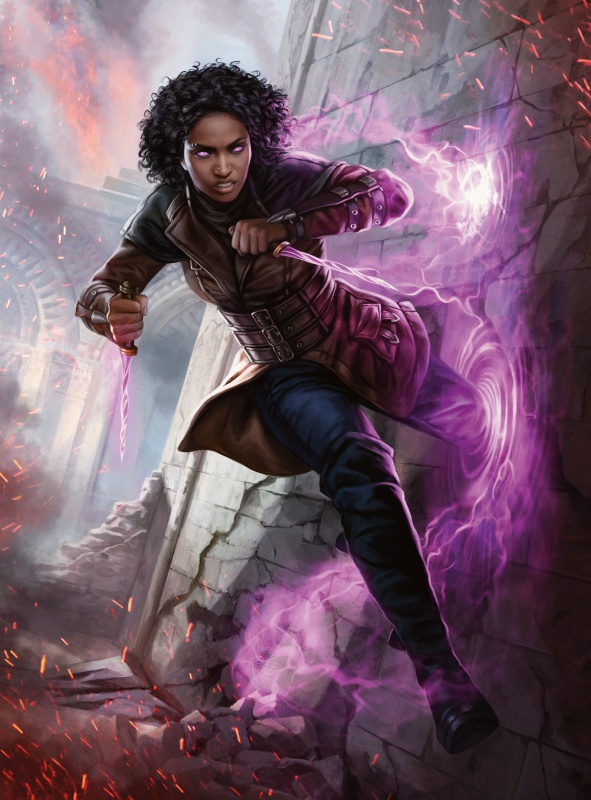 TMS: We have two new Planeswalker cards for Kaya in the upcoming set: Kaya’s Ghostform and Kaya, Bane of the Dead. How do these two cards fit into the larger story between her and Nicol Bolas?

Greg Weisman: There’s a war being fought on the streets of Ravnica, and our ghost-assassin Kaya is in the thick of things, fighting undead Eternals right up to the end … Unfortunately, the end is nigh.

TMS: What special abilities do you think make Kaya unique among white/black Planeswalkers? How did you work to make her powers stand out among some of the other choices players have?

Glenn Jones: Kaya’s ability to become incorporeal represented a unique top-down design opportunity [on her original Planeswalker card in Conspiracy: Take the Crown]. We liked “flickering” on and off the battlefield as a white way to represent that, because many older cards that do so reference ghosts, and because it offered an exciting new way for a Planeswalker to regain lost loyalty. 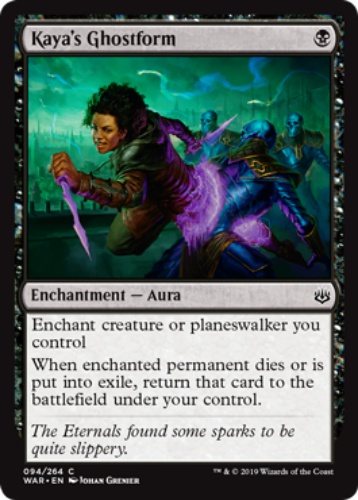 Enchant creature or planeswalker you control. When enchanted permanent dies or is put into exile, return that card to the battlefield under your control.

Flavor text: The Eternals found some sparks to be quite slippery. 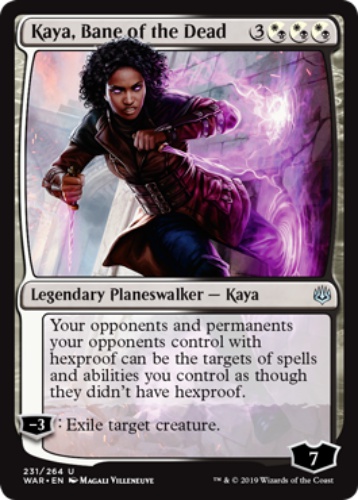 Your opponents and permanents your opponents control with hexproof can be the targets of spells and abilities you control as though they didn’t have hexproof.

TMS: One of the dynamics I really enjoy is the “relationship” between Kaya and Teysa Karlov. Do we have any developments in their partnership to look forward to? Who are some other characters we can look forward to Kaya interacting with?

Greg Weisman: The complex dynamic between Kaya, Teysa Karlov, and Teysa’s executive assistant, Tomik Vrona, continues to evolve as the situation on Ravnica gets more dire and complex. If Kaya never truly gains control of the Orzhov Syndicate then Operation Desperation—the last ditch plan to defeat Nicol Bolas—is doomed before it starts …

TMS: War of the Spark is going to be a huge block, and it’s so exciting to see how Kaya will play a part in the story and where her loyalty ultimately lies. Other than finishing up the Bolas storyline, from a creative standpoint, what do you think makes this story special?

Greg Weisman: Things change and advance for a dozen Magic: The Gathering characters as they go through the trauma of War.  It’s a bit of a cliche, but some will live and some will die, and even among the former, no one’s ever going to be the same. Among them, Kaya’s prominence continues to increase as we learn more tidbits about her past, and as she meets two individuals—Teyo Verada and Rat—who are going to play a major role in her life going forward.

Not only does the art look amazing, but it’ll be interesting to see how Kaya’s ghost hunting powers will mesh with the dead armies Bolas is controlling. I’m also excited to see how Kaya’s abilities will work in playgroups.

Let us know your thoughts and theories about War of the Spark, releasing on May 3, 2019, down below!