With a quick Q&A from Wizards of the Coast.

The first set of the new year to be released from Wizards of the Coast’s gaming sensation Magic: The Gathering will be “Ravnica Allegiance,” a great followup to last year’s “Guilds of Ravnica”—and a return to one of my favorite planes.

The two cards we are excited to share with you today are Azorius Skyguard, a flying creature with an awesome ability, and Arrester’s Admonition, an awesome instant. 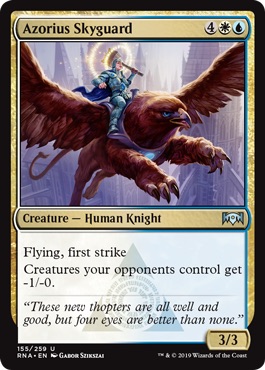 Creatures your opponents control get -1/-0

“These new thopters are all well and good, but four eyes are better than none.” 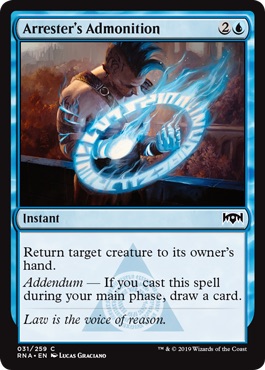 Addendum—If you cast this spell during your main phase, draw a card.

Law is the voice of reason.

The guilds that we will have the pleasure of choosing from are:

The Azorius Senate (White/Blue): Dedicated to establishing social regulations for everyone, Azorius strives to bring order to the chaos of Ravnica’s streets. Its human have come to function as intermediaries between the citizens and the laws of the senate, educating the compliant—and restraining the rebellious.

The Orzhov Syndicate (White/Black): These humans share a unifying ambition to improve their lives. All recruits start at the bottom, and with dedication, they quickly climb the ranks. Orzhov is all about advancement and power.

The Rakdos Cult (Black/Red): The humans of Rakdos Cult see Ravnica’s future as nothing but cruel death waiting for all—and they eagerly charge forward toward that end. Living devoid of fear or common sense, they live purely to fulfill their own pleasure, cause mayhem, and demonstrate the frailty of life.

The Gruul Clans (Red/Green): The savage and unkempt humans of the Gruul Clans join for social freedom and release from the frustrations of civilization. With a penchant for cunning, they often make skilled hunters and respected shaman.

The Simic Combine (Blue/Green): There is a balance to nature, and the humans who join the Simic Combine strive every day to achieve that harmony with the natural forces of Ravnica. They believe respectful understanding and open-mindedness is the sole way for species to adapt to growing urban threats.

Initially, I was really looking forward to playing as The Rakdos Cult, but the more I see of the Azorius Senate, and just how cool some of the abilities and mechanics coming out of that guild are, I think I might be playing as the well-dressed party-poopers.

We got a chance to speak to Mark Rosewater, head designer for Magic: The Gathering, about “Allegiance” and what there is to look forward to in the coming set

How did the people at Wizards of the Coast come up with the new Guilds in these sets in terms of personality and how their color combinations would set the tone?

Most of the work on crafting the guilds came back in the original Ravnica block when we first set out to create ten factions that each embodied the overlap of two colors. On our returns, our goal is to find new mechanics and new cards that embody the feel of the guilds as we’ve established them in the past, but with new twists and tweaks. One of our internal goals is that if you mix guild cards from previous sets with the new guild cards, they’ll play together synergistically while allowing you to do some new things.

What are some of the new mechanics that we can look forward to in this new set?

All the new Ravnica Allegiance mechanics can be found here. One of the coolest things about designing guild mechanics is that you get to make something specifically for the player that enjoys the kind of deck that guild plays. For example, Orzhov is about grinding out incremental advantage as it slowly “bleeds” the opponent out and Afterlife is a good mechanic to help do that as the creatures die and become tiny flying Spirits that continue to plink away at your opponent. Rakdos, in contrast, plays a more aggressive game where it spits out hordes of creatures. Its mechanic, Spectacle, helps you play additional creatures, but requires you staying aggressive.

Can you give us more information about The Azorius Senate and how it has evolved since the Return to Ravnica block?

The Azorius are the bureaucrats of Ravnica, the ones who make and oversee the laws of the land. In the past, we’ve played up their desire to control everything. Ravnica Allegiances is adding another aspect to the guild – choice. Do you want to be more proactive or more defensive? The guild mechanic Addendum, for example, lets you choose when you want to get extra utility out of your spells at the cost of being less reactive with them. This adds a new level to the guild.

As Commander is continuing to grow in popularity, are there any new legendary creatures for Commander can we look forward to?

There are a whole bunch. Two of my favorites are Prime Speaker Vannifar and Teysa Karlov. Prime Speaker Vannifar is a green/blue legendary creature with an ability very similar to a popular and powerful old card called Birthing Pod which allows you to transform your creatures on the battlefield into other creatures from your deck. Teysa Karlov is a card that does one of the things I enjoy most in the game – doubling. In specific she doubles any effect generated when a creature dies. Both of these cards are powerful effects that give the deck builder a lot of options how to take advantage of the card. I expect both to be popular commanders.

Which two guilds would you say would be the most fun to play against one another?

Azorius versus Gruul is the classic control versus aggression match-up. Gruul is trying to win as quick as it can playing larger and larger creatures. Azorius meanwhile is trying to establish control playing a slower deck that’s trying to stall the opponent until it can get the upper hand.

After this set what are some fun things Magic fans can look forward to coming from Wizards of the Coast and the Magic franchise?

2019 is a high-octane year. This year will be my twenty-fourth working on the game and I believe this might be the best overall years’ worth of Magic products we’ve ever made. There are a number of projects that I’m dying for the audience to finally see, a few that took many years to finally bring to fruition.

That is an exciting promise to end on.

Also, for those who are playing on Magic Arena, good news: the cards will be available to play on the platform on January 17 and will be physically available on Jan. 25, 2019

Who will you be aligning yourself with, Magic fans?

(image: Magic: The Gathering/Wizards of the Coast)