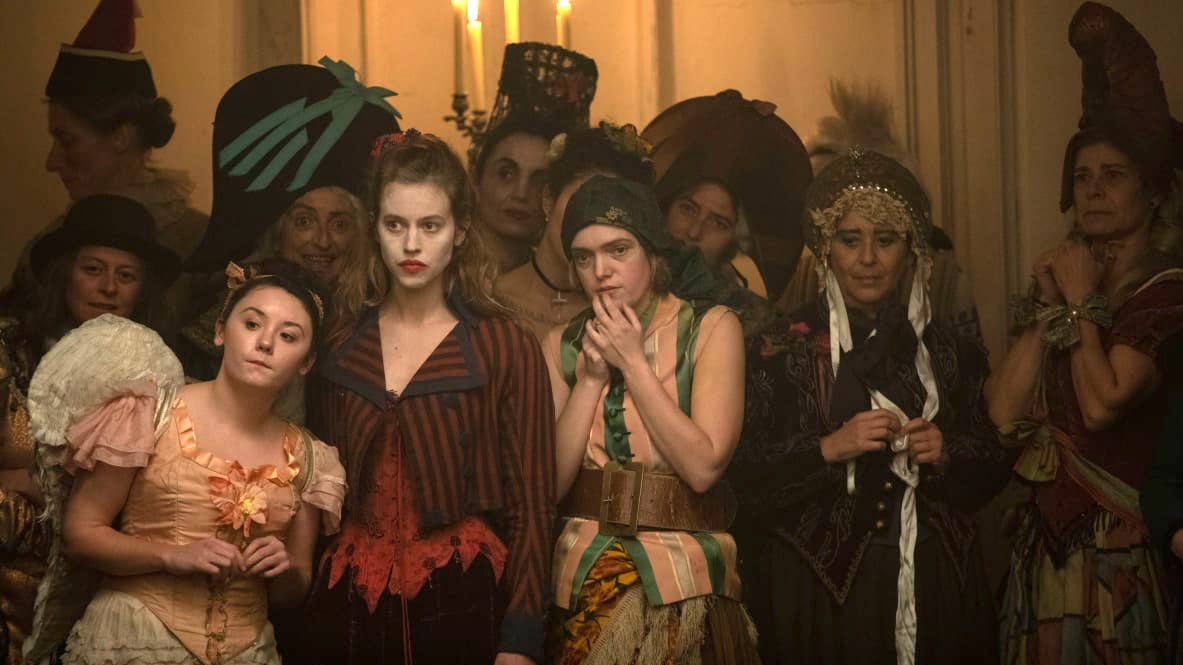 Credit to Mélanie Laurent, who is continuing her directing career with The Mad Women’s Ball, because she knows when she should hold back. What she’s saying isn’t exactly new, since women in fiction with mental illness are typically used to hold a mirror up to society and its shortcomings, and just what we consider insanity.

But Laurent knows it’s more complicated, even if there are some depressingly familiar tropes in the story of Eugénie (Lou de Laâge), whose male relatives confine her to Pitié-Salpêtrière, a Parisien neurological clinic. Eugénie is ostensibly confined due to her ability to see and communicate with spirits, but this alleged ability was merely the straw that broke the camel’s back. In her father’s stern, conservative household, Eugénie has intelligence, wit, and a hunger for education that simply won’t be stood for in the repressive 19th century high society world she inhabits.

Yet despite it all, It’s quite easy to see Eugénie’s life heading in a completely different direction, as she was still savvy enough to slip away to a cafe in Montmartre for a smoke and a read, even tentatively forming a connection with a charmingly handsome young artist. Given enough time, would Eugénie have been willing and able to break away from the suffocating opulence of her family and make a life of her own, one devoted to the art and stimulation she clearly craves?

Sadly, the girl is interrupted as she finds herself imprisoned in an asylum where the patriarchy is stripped of all pretension as the various women are routinely used and abused by an all-male medical establishment that fears them and their innate ability to unsettle and upset the smiling, obliging servitude women are expected to embody. Some are genuinely ill, while others have simply been hidden away for the crime of arousing male interest, or just violating gender norms.

None of them, however, allow the men who control their lives to have the final word. Laurent allows them to be naked, rather than nude, as they care for each other with the determined protectiveness that stems from constantly being subject to the whims of a common enemy. At least that enemy doesn’t include Laurent herself, who has a role as head nurse Geneviève. Laurent plays her not as an arthouse twist on Nurse Ratched, but with the weary air of a woman who witnesses nearly unbearable pain and fear on a daily basis and must somewhat wall herself off from her patients for self-protection.

Geneviève proves vulnerable to Eugénie, though. And who wouldn’t, given that the movie doesn’t doubt Eugénie’s abilities? It’s part of a depressing trend recently, seen in films as wide-ranging as Take Shelter, Split, and Horse Girl, to incorporate supernatural or otherworldly elements to stories about mental illness, which says more about us and how depressingly little we’ve progressed in how we see those living with it.

It’s a good thing that Laurent treads more delicately than most. We aren’t convinced of Eugénie’s gift/curse due to any flashy CGI, since Eugénie is the only one with the ability to see and hear the ghosts she communicates with. Rather, it is her words, her repeated knowledge of facts that should be unknown that convince us and terrify many around her.

By fully embracing Eugénie’s view of the world, Laurent shrewdly questions beliefs we still hold dear today, namely how society expects us to believe in god and even venerates a precious few who have claimed to see the Virgin Mary, but consigns someone with Eugénie’s beliefs to insanity. And subjects her to all sorts of barbarity under the guise of treatment, including immersing her in ice cold water, bloodletting, and imprisoning her in a lightless, underground dungeon.

It’s a thin line to tread, but Laurent does it so beautifully that it barely detracts from the commentary she offers on gender and the medical community in general, which tends to make heroes out of many a name in textbooks who were no doubt guilty of the same horrific crimes we see in The Mad Women’s Ball. That titular event itself also acts as both climax and a scream into a void, a warning to those who turn away until it’s too late. The question is, will we heed it in time?