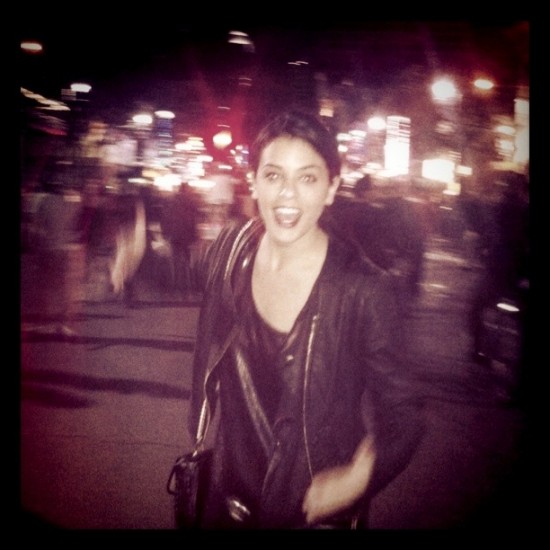 In our No Nametags interview series, Geekosystem chats with the creators, operators, and visionaries in today’s tech scene.

This past week, we spoke with Lauren Leto, the creator and cofounder of Texts from Last Night and the CEO of Bnter (pronounced “banter”), a social site and app that allows users to share conversations either publicly or privately and create small, intimate networks of friends. Last week, Bnter hit two new milestones in its development, following up on its iPhone app with an app for Android and also releasing a bookmarklet that allows users to easily import conversations from Facebook, Gmail, Twitter, GroupMe, Foursquare, and Campfire.

Speaking with Leto at a Williamsburg restaurant a few blocks from The Makery, the co-working space where Leto, her CTO, and Bnter’s recently hired engineer have set up shop, we discussed the future of Bnter, the New York tech scene, and why social networks where everyone has to have hundreds of friends are totally overrated:

Geekosystem: There are a lot of social apps out there right now; what sets Bnter apart?

Lauren Leto: There’s 5001 photo apps: Why not make an app that captures the things that you said with your friends out at the bar? Everyone has amazing conversations with their friends — that’s why they’re their friends. Bnter is a service made for allowing all of your friends to see conversations that you’re having with that group. We expect there to be smaller group sizes and more private accounts, because it’s really about who you genuinely are rather than trying to make a professional impression, which is what a lot of Twitter is.

Lauren Leto: I absolutely love the New York tech scene. What I love the most about it is how diversified we are in terms of — the New York tech scene brings out a lot of fashion people, media people — where I think San Francisco is so much tech-focused that they kind of lose sight of the world outside and the needs of the world outside. I think New York gives a better view of what the average American interests are.

“I think that all startups, all new and really disruptive social startups, are moving more towards genuine relationships.”

Geekosystem: You successfully raised funding for Bnter before the service even launched. How will Bnter ultimately make money?

Lauren Leto: We definitely want to make money! We’re going to do brand integrations. We haven’t really been publicly discussing it yet. Right now, we’re focusing on building up a user base. We really want to get traction and I believe that we can attain that extreme traction that gives weight to really interesting and innovative businesses. Bnter has been growing organically, which has been great. We haven’t done a big marketing push yet, because we’ve just been trying to get feedback and iterate, which — Thank God we’ve been doing that! Our users have been amazing, and I think we’ve really evolved the product from what it originally was, which was really narrow in scope from what it is now, which is a lot better.

Geekosystem: What do you mean?

Lauren Leto: So it took a while for us to realize that we were similar to a photo app. Originally, we were thinking that Bnter would be just text messages, which would have been the dumbest thing we could have done, because you can’t limit people like that on a successful service. So that’s basically where we are. Making it so that across the web and in real life, people can check conversations in a streamlined way.

Geekosystem: A big trend in social networking right now seems to be the push for smaller, more intimate groups, and based on what you’ve been saying, Bnter seems to fit that. How many people would you expect a typical user to follow?

Bnter’s the same way. With Bnter, your ideal follow is either someone on the internet that you think is frickin’ hilarious or interesting, but mostly just people you know. So like, 10 people is all you should really be following on Bnter, and have 10 people follow you back. It’s your close group of friends. But — I mean look, no one ever sticks to that. I feel like people will end up following more. It’s crazy when you follow a lot of people on Bnter — I do a lot of Bnter’s community management — because I feel like I know more about these people that like become my friends. I just hear what their mom says to them every day, or what their boyfriend’s nickname is for them … it’s a very strangely intimate, personal thing. You can really make friends with people without actually knowing them. Internet friends!

Geekosystem: So building up a user base seems to be your #1 priority right now; after that, what do you see in Bnter’s future?

Lauren Leto: We really want to get more media outlets on there because we really think there could be an amazing opportunity. For example, companies could use Bnter for overheard in offices, and right now, you can link it up with your Twitter account and pull in all your @ mentions. It puts them into a drafts folder, so you can choose which of them to display onto Bnter. If you get a bunch of your fans in there, you can post the conversations that are most meaningful — so not just your customer service saying ‘thanks,’ but your customer service explaining why a feature is a certain way, or answering someone’s question about something, and then your fans can comment on it. We think that could be a new and insightful way for brands to use Bnter.