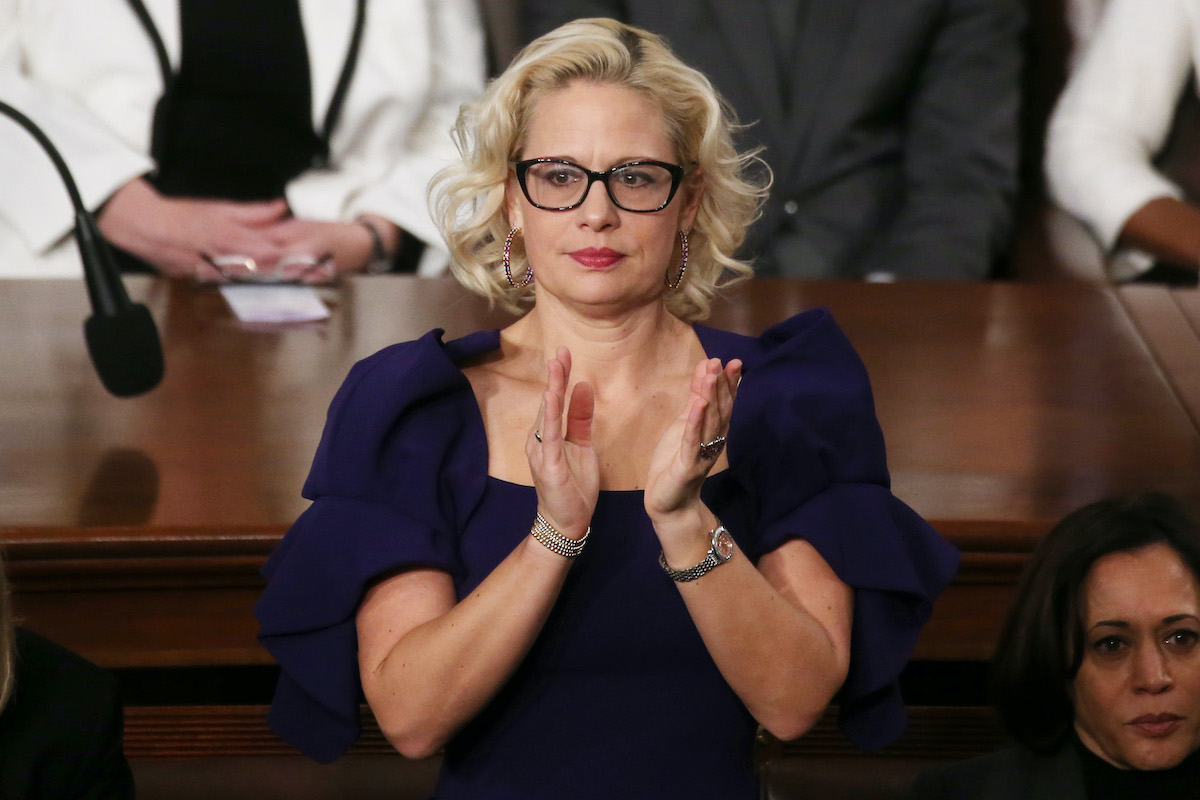 Last week, Senator Kyrsten Sinema managed to make people even angrier with her than they already were after she posted a photo to Instagram sporting—among other trademark quirky accessories—a ring reading “Fuck Off.”

The central placement of the ring, worn on the Arizona Democrat’s sangria-sipping hand, made it the focal point of the photo, leading many to make the logical assumption that it was a message to her critics, of which she has amassed many recently.

Kyrsten Sinema gleefully condemning millions to poverty and then putting on a tacky golden ring that says “Fuck Off” has strong Melania jacket energy pic.twitter.com/rdSnfQ4Uu9

Last month, Sinema drew a lot of well-earned criticism when she voted against increasing the federal minimum wage to $15. Even worse than her vote, though, was the gleeful manner in which she did so, delivering her thumbs-down with a jaunty bounce.

Yellow Owl Workshop—a women-owned business out of San Francisco that made the ring Sinema wore in that photo—has now responded and they’ve done so beautifully.

“A picture featuring our F*CK Off ring has gone viral. At Yellow Owl we create fun stuff to express yourself but we are dead serious about social justice. We fully support at least a $15 minimum wage because ⚡️EQUITY and DIGNITY⚡️LOOK GOOD on EVERYONE,” the company wrote on Instagram.

“Thank you to all of our customers, including Senator Sinema (D-Arizona) whose dollars allow us to pay well above San Francisco minimum wage and support our small woman-owned business that proudly holds values over profits. Speaking of we’ll be donating profits from sales of this ring for the rest of the month to National Employment Law Project.”

NELP is an organization that fights for workers’ rights, including legal advocacy, an increased minimum wage, and just an overall better quality of life for people in the workforce.

“All profits from the sales of our F*ck Off ring for the rest of the month will be donated to @nationalemploymentlawproject who fight to raise the federal minimum wage,” Yellow Owl Workshop wrote in a follow-up post. “We appreciate the attention brought to our work by the recent events with @kyrstensinema and we want to put our money towards an organization that is fighting to protect workers and build systemic change.”

I didn’t realize Yellow Owl Workshop was the maker of Sinema’s ring but I’ve been a fan of that brand for a while. Their pins and earrings and greeting cards are super cute and I own a few pairs of their socks. Looks like I might have to add a certain ring to my collection now that it can come with a donation to fighting for the kinds of things Sinema is working against.