Kindle Books Get Video and Audio, Provided You’re Not Reading them on a Kindle 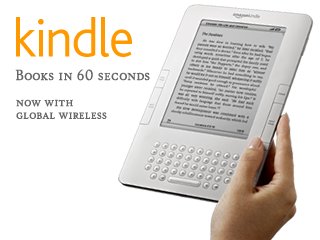 In a new release, Amazon announces that embedded video and audio are coming at last to Kindle Books. These are being rolled out bit-by-bit — you can see the full set of video- and audio-enabled books at the Kindle Store — and the upgrade does not actually apply to Amazon’s own Kindle e-reader.

Rather, Amazon is giving this Kindle functionality to none other than its rival in the nascent world of tablets, Apple: The new, media-rich books will be available for the iPad, the iPhone, and the iPod Touch.

DVICE speculates that this is a sign that there’s a new “iPad-like Kindle” in the works:

[T]he Kindle offers a distinctly different reading experience than, say, an LCD-sportin’ iPad, and its e-ink display, easy on the eyes for readers, is often thought of as a selling point.

That may not be so for long, however. The rumors have all been that Amazon is looking to make an e-reader that is closer to the iPad in shape and function, rather than sticking to the ground its hardware has broken.

Some of the disappointment being expressed that video and audio-enhanced books are being rolled out for non-Kindle platforms seems to be misplaced: If Amazon is serious about such a major shift in their hardware strategy, it makes more sense for them to test it out on a smaller, third-party platform than to roll out an entirely new device of their own. Who knows: If the response turns out to be poor, it just may steel Amazon’s resolve not to follow in Apple’s hypey footsteps, but to continue to do its own thing.

(The Register via DVICE)