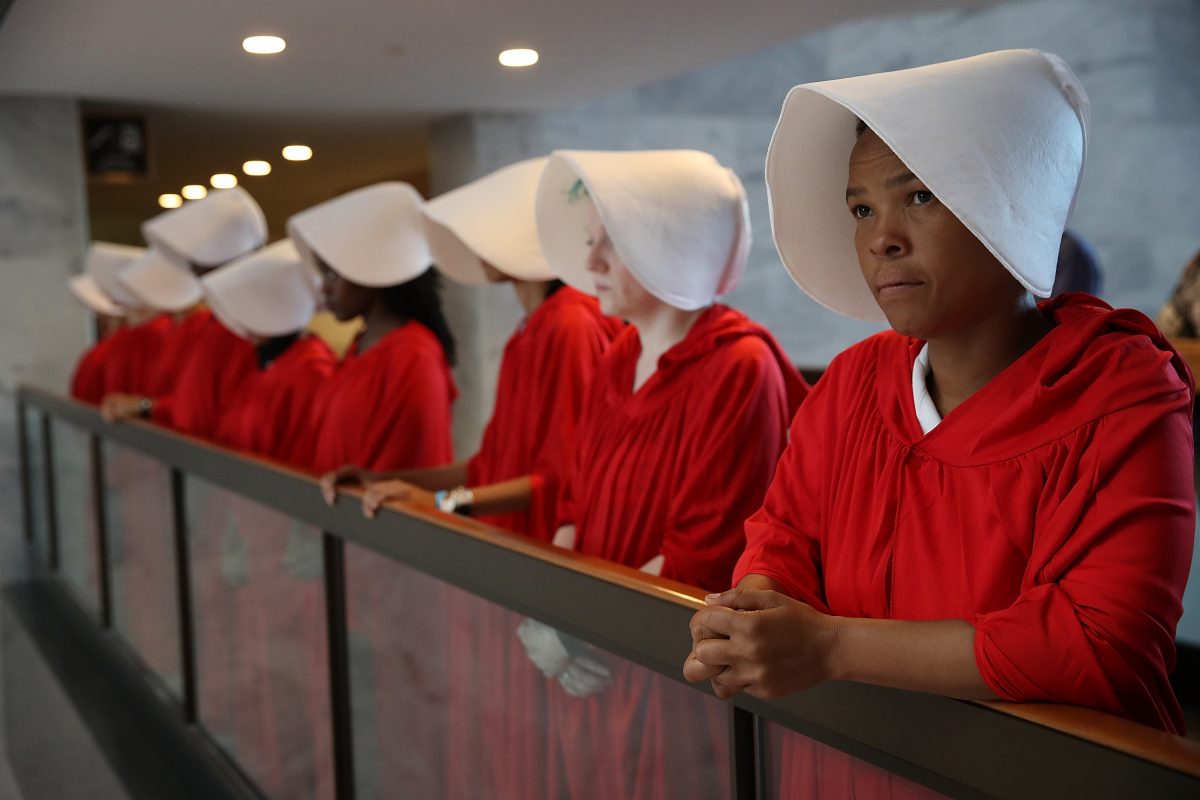 As of this week, an allegation that Brett Kavanaugh attempted to rape a young woman about 35 years ago has momentarily derailed Republican senators’ attempt to force Kavanaugh onto the Supreme Court. Faced with fiery pushback from Democratic leaders in the Senate and feminist activists standing behind Christine Blasey Ford, the Judiciary Committee canceled the vote for Kavanaugh that was originally scheduled for Thursday, and Republican senators are now pressuring Dr. Ford, who had to see a therapist to heal from the alleged assault and currently faces death threats for coming forward, to sit and testify at the same table as her alleged assailant.

Republican senators are adamant that the only way for Ford’s allegations to be taken seriously is through propping her in front of a predominantly male committee, and subjecting her to what promises to be a highly politicized interrogation by men who have already made it clear they don’t want to believe her. (And once again, all while sitting at the same table as her alleged attempted rapist.)

As Republicans, ranging from President Trump to Senators Orrin Hatch, Chuck Grassley, Mitch McConnell, and others, express sympathy for Kavanaugh, utter suspicions about why Ford didn’t immediately come forward, and suggest Ford either “misremembers” the assault or is exaggerating her experiences, it’s important that we take a step back and recall why they’re so adamant that Kavanaugh joins the Supreme Court in the first place: Kavanaugh’s nomination and confirmation are meant to complete the Republican Party’s decades-long War on Women. Frankly, it’s no coincidence that politicians hellbent on taking away women’s fundamental right to control their bodies are also enthusiastic sympathizers of alleged sexual abusers of women.

Sexual violence and opposing reproductive rights go hand-in-hand; they always have. Sure, that’s not to say there aren’t plenty of “pro-choice” men out there who have committed sexual assault, but an ideology that says women do not have the right to choose to not be pregnant is constructed around the very same disregard for women’s rights to safety and autonomy that underlie sexual assault.

In context with what Kavanaugh would do to women’s rights if confirmed to the court, none of us should be surprised by how little Republican leadership and Kavanaugh’s supporters care about the fact that he’s been credibly accused of attempting to rape a 15-year-old girl when he was 17. If confirmed, Kavanaugh’s record and public comments about Roe v. Wade make it exceedingly clear he would decimate reproductive rights and serve as a crucial vote to hack away at access to abortion and birth control.

Republican lawmakers have made it clear in their policies and unabashed rhetoric, conflating fertilized eggs with born babies, dehumanizing women, and playing politics to subject women across the country to degrading and unsafe living conditions, that stripping women of fundamental bodily autonomy has been their end goal for years. Kavanaugh signaled the completion of that end goal, and considering the tremendous violence that stealing women’s reproductive rights would subject American women to—the inevitable, terrifying spike in unsafe abortion rates, thousands of women dying or being injured from unsafe abortions like in pre-Roe America—of course Republican politicians take no issue with credible allegations that Kavanaugh himself subjected a woman to sexual violence.

Taking away women’s reproductive rights is sexual violence. It strips women of choice, autonomy, control, and decision-making power over their bodies and what happens to their bodies. It forces pregnancy on women without their consent and exposes them to severe physical and mental health risks as a result.

It’s also important that we recognize Kavanaugh is hardly the first anti-choice man with a record of credible allegations of sexual violence. Republican politicians have done nothing about the president or all the accused men who have filed in and out of his cabinet or occupied leadership roles on his presidential campaign.

In terms of their policies, they’ve attempted to derail the Violence Against Women Act and budget bills to fund rape kits, and they qualify their draconian anti-abortion laws with “rape exceptions” that would subject survivors seeking abortion care to the indignity of proving their trauma just to receive basic health care. It’s past time for us to connect the dots and acknowledge how sexual abuse, complicity in sexual abuse, and opposition to reproductive rights are bridged by a shared, fundamental violence against women’s bodies, and undermining of women’s consent.

In either case, the ardent defenses of Kavanaugh and character attacks on Dr. Ford that we’re now seeing offer a master class on why survivors rarely report their experiences. Between 63 and 90 percent of survivors choose not to come forward, and considering the threats to their safety, and the shame and blame that inevitably await them, who could blame them?

If Kavanaugh’s defenders do entertain the possibility that the assault in question took place, they continue to dismiss it because he was just 17 at the time. Never mind that 17-year-old girls have always lacked the fundamental, gendered privilege of their actions being shrugged off because “boys will be boys,” and never mind how Kavanaugh was happy to impose a life-long consequence on a 17-year-old detained undocumented minor, by working to deny her access to abortion while he was on the D.C. Circuit Court.

Brett Kavanaugh’s nomination and confirmation hearings have always been about reproductive justice, and this new, horrifying added component of sexual violence only reinforces this. At this point, it feels like it’s no longer enough to say Republicans don’t care about or are willing to overlook sexual violence. Often, they overlook this violence with the direct goal of empowering or electing officials who would carry out their agenda of targeted reproductive violence. It’s time for us to recognize how sexual assault and banning abortion and birth control both amount to violence on women’s bodies, and disregard for their consent.