Jupiter Just Took One For the Team, Meteorite Style

When you look up at the sky tonight (or early tomorrow morning), see if you can find Jupiter. And if you can, give it a bit of a nod. A salute. A wave. Perhaps, extend your fist towards it, and imagine that it’s giving you a planetary fistbump right back, because if Jupiter could, it would. Instead, it’ll just have to keep using its enormous gravity well to attract dangerous extra-solar bodies like asteroids and comets, giving the inner solar system of Mercury, Venus, Mars, and yes, Earth, a bit shelter from what space, earth, and ancient life scientists understatedly call “impact events.”

You know, like it did yesterday morning, as picked up on by a handful of amateur astronomers.

Yesterday at 11:35:30 AM Universal Time (Oh, you didn’t know we had such a thing as Universal Time?), an amateur astronomer said he happend to be looking at Jupiter and observed a flash of “about 100 miles in diameter” on the surface of the planet. This information made its way, through the power of internet forums, to another amateur astronomer who happened to be filming Jupiter at the time. He went back through his footage and, sure enough, found the precise moment of impact: 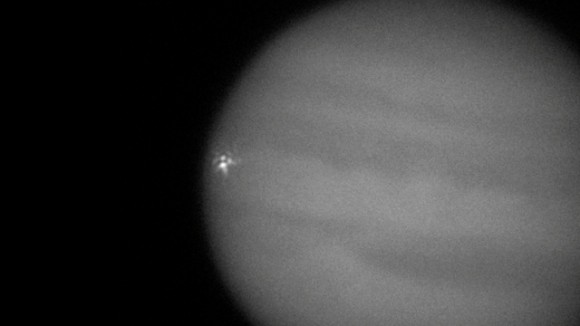 Scientists and astronomers alike will be waiting to see whether Jupiter develops a dark mark near the area, which would confirm that this flash was the impact of a comet or asteroid dragged into Jupiter by the planet’s massive gravity. And it wouldn’t be the first time, or even unusual. Impact events on Jupiter have been recorded in 2009 and 2010, while the Shoemaker Levy-9 comet’s collide with the planet in 1994 made so much news I actually remember it, despite being barely eight years old at the time. And for good reason:

Astronomers suspect that giant Jupiter’s gravitational pull serves as a cosmic shield, sweeping up incoming objects that would have a deadlier effect if they were to slam into our planet. Some scientists say that without Jupiter, life on Earth wouldn’t have had much of a chance.

So don’t forget to give Jupiter a little credit tonight, as folks watch it for change in color that would indicate a large impact. It might just be one of the reasons we’re here at all.