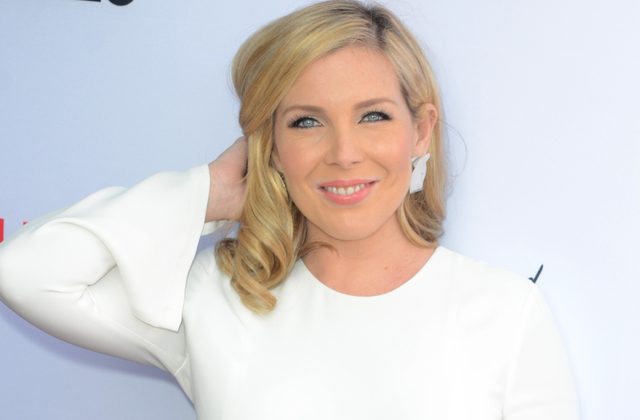 Plenty of actors and comedians have written books over the years. It’s been an especially great era for books written by women in the field, from Tina Fey and Amy Poehler to Mindy Kaling and Anna Kendrick, there’s no shortage of funny and personal memoirs. But June Diane Raphael of Grace & Frankie and Burning Love (among tons of other hilarious projects) is working on another kind of book. Along with Kate Black of EMILY’s List, she’s writing a book titled Represent: The Badass Woman’s Guide to Running for Office and Changing the World. Well, that sounds like something we need in our hands right the hell now, doesn’t it?

We’ve written here before about the important work EMILY’s List does. The organization works to get pro-choice Democratic women elected to office. Through fundraising, training sessions, and other campaigns, they cite themselves as having “a community of more than five million. Over 900 election victories. All with a single focus — progressive change that matters.” Combining the practicality of EMILY’s List with Raphael’s humor, the book will be a “concrete, funny, stylish, accessible, and interactive women’s guide to running for office,” with “elements of a workbook/planner” as well as a “prescriptive how-to text.”

Raphael told People she was inspired to write the book “Because we can’t look at another photo of a bunch of older white dudes making decisions about women.” (Strongly agree.) She quotes the numbers in Washington, that “women represent less than 20% of Congress and less than 25% of state legislatures.” Women of all walks need to be represented in much greater numbers, but they face unique obstacles in even just thinking about getting into politics.

From the official synopsis, “Whether you’re running for city council or the White House, research shows that women need to be asked to run for office. Many times. And whether she buys it for herself or it’s given as a gift at graduation/birthdays/Mother’s Day/Galentine’s Day, this book is that very first ask. Women will learn how a campaign might work in the messiness of their real lives, how to harness their passions/anger/humor/intelligence in public office, and what they actually need on their resumes to lead. From ‘maybe I can do this’ to ‘yes, I can,’ Represent. is the book that acknowledges the barriers standing in front of women, and helps them jump right over them.”

Running for office maybe isn’t your path? This book still sounds awesome, as “it also includes information on the next best option – how to support, uplift and nominate other women. Practical and inspirational, the book will both encourage and enable potential female candidates and their supporters, and will include fill-in pages and infographics. Represent. will be the bible for any woman contemplating a run for office (if the bible included mild cursing and lots of jokes).”

Consider this at the top of our graduation/birthdays/Mother’s Day/Galentine’s Day wishlists.