Joss Whedon Talks What He Hopes People Get Out of Age of Ultron and Really, Really Loving James Spader. A LOT. 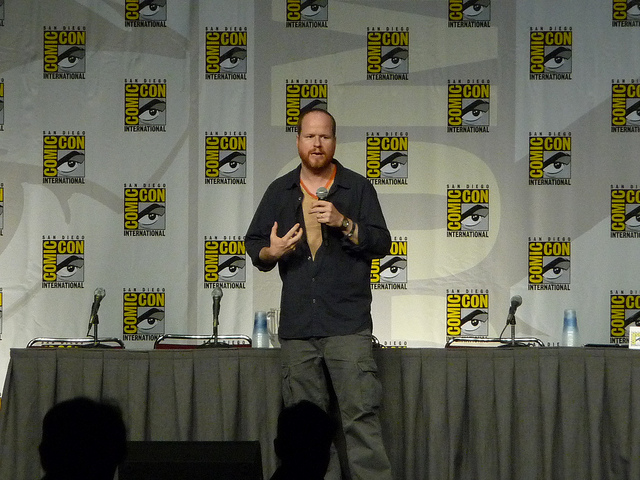 Joss Whedon recently celebrated his 50th birthday! (Happy birthday, Joss!) Which means, of course that even if you “grew up with Buffy,” that we’re all freaking old. Pass me the Depends. ANYway, the point is, Whedon recently gave a birthday interview with Biography.com about Avengers: Age of Ultron which gives us a little more insight into how he approached the characters, and a lot more insight about how much he loves James Spader, and we’ve got some of the highlights for you!

When asked about the difficulty of making sure each character in a huge ensemble like The Avenger gets their due, Whedon had this to say:

With the new characters (in Age of Ultron), there’s fun to be had in the sense of creating them for moviegoers from the ground up. Obviously, you have the comic book reference, but the character hasn’t been playing things out for three movies, so figuring out the look and the mannerisms and choreographing the movements and, of course, finding the right actors, which was the first and actually easiest step, is important and a lot of fun. I only ever wanted Aaron (Taylor-Johnson) to play Quicksilver. I sat down with Lizzy (Elizabeth Olsen) once and only wanted her to play Scarlet Witch.

He had nothing but praise for his two newest Avengers:

With Aaron and Lizzy, for example, they’ve both been working for a while. They know what they’re doing. There’s usually a little nervousness from the new guys that keeps their energy kind of percolating, which is kind of great. At the same time, they were both right in the pocket from the moment they stepped on the set. For me, it’s just a question of a little tweaking here and there, which is not that different from directing the other guys who have been in their roles for a while.

But his highest praise came for the film’s Ultron, James Spader. When asked about how casting Spader impacts the film, Whedon says:

James and I talked about the script a lot. James is very articulate, and he said, “I’m constantly referencing things either in a speech, or emotionally, that are not actually happening in this story, that are maybe not relevant. Maybe.” And he worked very hard with that. He was, like, “It’s really taking me a second to incorporate all of those things into this performance.” I was, like, “Okay, that’s the point.” James was doing “emotional math,” referencing things that we don’t necessarily see in this film, things that make his character go suddenly very angry or very suddenly obsessed about something else. With the character of Ultron, his mind is always everywhere, and James really embraced that. The thing about James is: he was my first – and only – choice for this character.

He then goes on to talk about how Spader was able to tackle the complexity of this complex character (who happens to be a sentient robot):

Ultron has been a major nemesis for the Avengers in the comics for decades — he’s one of their top three all-time villains — and I love robot stories, too. But I never really felt I understood Ultron in the comic books, so this movie was sort of a chance to create my own version of Ultron. My version of Ultron is not totally sane. You know, why is he angry all the time? What’s that all about? Because there’s something really bothering him. One of the other great things about Ultron is, physically, he’s a match for the Avengers — and he can create more matches for the Avengers. I wanted an actor who could convincingly play an eight-foot robot. I wanted somebody who could have all the gravitas of this complicated, sort of mysterious character, and then also go to a very comedic, very left of center place, and James is exactly that guy. I’ve seen him do both so well. As soon as I mentioned James to Marvel, we never had another conversation about casting that role again. It was just, like, no there’s only one person for this.

Whedon also has an interesting take on Ultron in relation to Tony Stark, and how they’re both heroes in a way:

I come to see a movie about a superhero team and an evil robot because it’s very human and very ridiculous and very heartfelt and a lot of fun. For me, Ultron is the best kind of villain — which is, he’s not a villain at all. He’s a hero gone wrong, which he sort of shares with Tony (Stark/Iron Man). These are characters who have been presented with an unsolvable puzzle, and it’s kind of made them crazy. Ultron is a character who has many fathers, but ultimately he’s a creation of Tony Stark, with some help from Bruce Banner (The Incredible Hulk). It’s Tony’s obsession. It’s his obsession to solve the world. He’s seen it messed up, he’s messed up himself so many times, and he’s gotten to a sort of higher ambition than what he had before, which is just to make the world better. He’s got this obsession with trying to create the perfect peace, and from that obsession is born a character like Ultron.

Now, if only the interviewer would’ve asked him about Black Widow or the whitewashing of Quicksilver and Scarlet Witch. Those are some answers I’d like to read!