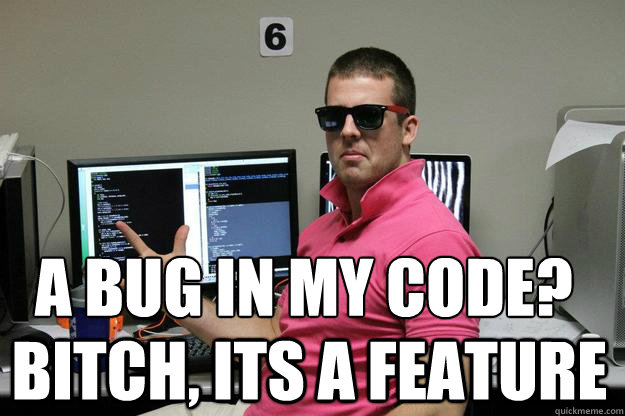 Sportacam, a Finnish company bent on “changing the way you watch sports – forever,” posted an ad for a developer, and managed to make themselves look like misogynist, homophobic brogamming bros in the process. Bro fist!

Here is the job ad in question, which has since been removed: 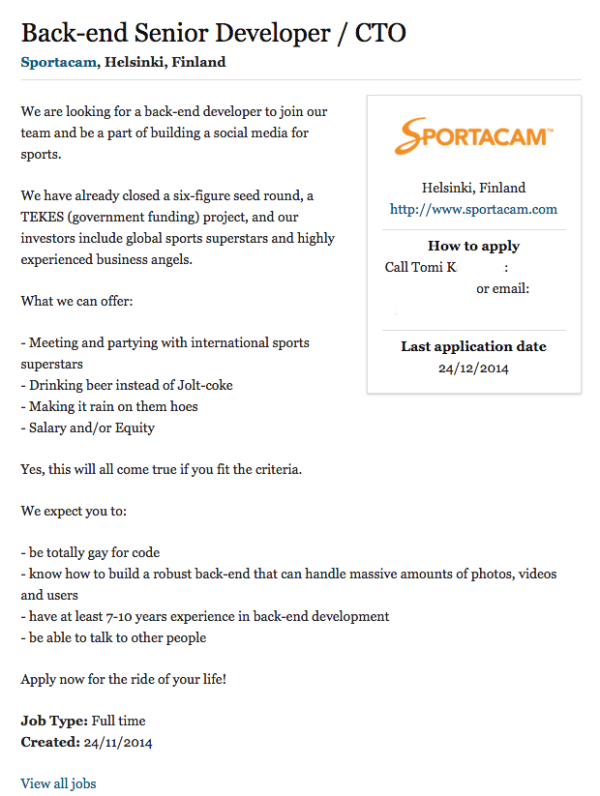 Sportacam—who currently boast seven followers and the apparent inability to change their default egg avatar—have taken to Twitter to defend their incredibly ill-advised job posting. It’s just satire, guys! It’s not hurting anybody! Learn how to take a joke!

It is a paraphrase from the HBO series Silicon Valley where a team member accuses another for being gay for his Java.

@kristajessica We dont believe in censorship. We wanted to try a more satirical approach. It is unfortunate if it offends people. — Sportacam (@Sportacam) December 10, 2014

@kristajessica Its a Fat Joe song reference and meant as satire. We thought it was very clear the ad is cliche and hyperbolic — Sportacam (@Sportacam) December 10, 2014

@goodwillbits Nothing is offensive. Being offended only makes you feel bad. But nothing happens.

@goodwillbits We don’t believe in censorship. People should be able to joke about EVERYTHING. We are total joke liberals. — Sportacam (@Sportacam) December 10, 2014

@goodwillbits Everything. Considering the reaction on this obvious satire ad we best not.

@tommorris The ad is satire. Gay for code is from Silicon Valley, Jolt coke is cliche coder drink. It really was that unclear? — Sportacam (@Sportacam) December 10, 2014

@iamdanw @arcticstartup Well we are marketing guys and this went viral in Finland today. A lot of applications. Mission accomplished :)

See? It’s all okay because it went viral and their first hire was a woman!

I’m obviously being sarcastic here, but I’m sure we can all see the major problems with this job posting. In a work culture that already feels overwhelmingly exclusionary to women, ads like this don’t help. In computing-related occupations, women hold only 26% of jobs. 17% of Google’s tech workers are female. 14% of computer science degrees at major universities go to women. 0.4% of female college freshmen say they want to major in computer science. And if you’re searching for women who aren’t white and aren’t straight, you’re going to have to look even harder. To fix this, Microsoft VP Cindy Bates suggests we expose more women to computer-related jobs.

This ad is exactly how not to do that. The fact that this company thinks it’s acceptable to create a job ad that clearly alienates half (if not more) of the population brings the problem with tech culture into startling focus. These moments of casual misogyny, these micro-aggressions, are the kinds of things women in tech have to deal with every day.

If they’re not able to laugh it off or internalize it, they’re “too sensitive.” To fit in, you have to be just “one of the bros.” Asking tech start-ups to refrain from making misogynist advertisements isn’t censorship any more than it is to expect they also not make blatantly racist statements in an advertisement. “It’s satire” isn’t a Get Out Of Jail Free card for being an asshole. It just makes you a tone-deaf asshole.

Anyways, we’ll genuinely worry about this company becoming a blight on the tech industry when they manage to figure out how to change their cover photo on Twitter.