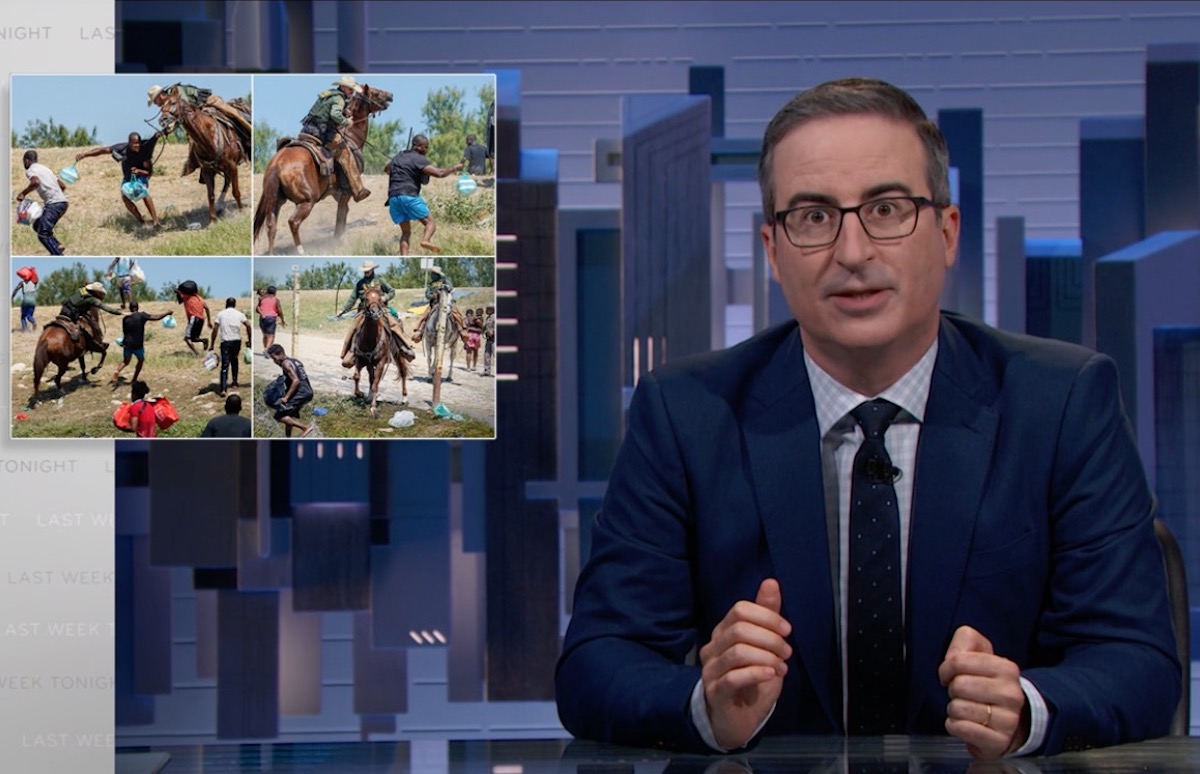 On the latest episode of Last Week Tonight, John Oliver spent a few minutes at the top of the show tackling the Biden administration’s continued refusal to reform the country’s immigration policies in the ways we were promised during Joe Biden’s campaign. Biden presented himself as the anti-Trump, but as Oliver put it, his administration looks to be “far more focused on seeming better when it comes to immigration than actually being better.”

The treatment of refugees and migrants has been in the news this week due to the abhorrent pictures coming out of Del Rio, Texas, where border patrol agents have chosen to “LARP plantation overseers,” as our Alyssa Shotwell put it, riding on horseback and using reins as whips while rounding up mostly Haitian refugees.

Images and video of this inhumane treatment surprised people who thought that, with Democrats in (slight) control of the House and the Senate, and Joe Biden—who’s built up an image of a kind, compassionate man—in the White House, this kind of thing couldn’t still be happening.

And indeed, that’s the message that White House press secretary Jen Psaki has been pushing: that it shouldn’t be happening because, as she said in a clip played by Oliver, “This is not who we are. That’s not who the Biden/Harris administration is.”

As Oliver notes, that’s one of this administration’s “greatest hits.” It’s a good line, and one that has convinced a lot of people things have changed, but it’s not exactly accurate.

“Hold on there,” Oliver says. “Because saying, ‘This is not who we are’ about white people chasing Black people on horses is a bit of a stretch. Historically, we’ve been ‘yes, and-ing’ that idea since 1619.”

“As for ‘This is not who the Biden/Harris administration is,’ are you absolutely sure about that?” Oliver continued. “Because from an immigration standpoint, there is not a ton of evidence that you are anything else yet. This administration’s record on immigration, particularly on the Southern border, has been deeply underwhelming. And this week, they’ve been all over the map. Because while many Haitians were released into the U.S., we also sent thousands back to a nation that’s recently suffered an earthquake and a presidential assassination with no clear rationale for how those decisions were made. And it’s not great when our process for deciding who gets released and who gets expelled is as haphazard as the process of finding a new host of ‘Jeopardy!’”

When it comes to immigration and asylum, the Biden administration’s modus operandi seems, in large part, to be to keep the same policies from Trump’s time in office going until enough people catch on and the public outcry reaches a level they can no longer ignore. They did this with their refusal to raise the refugee cap as promised, with the administration dragging its heels until it got absolutely pummeled by progressives on Twitter, along with John Oliver in another episode earlier this year.

Right now, the Biden administration is being called out not just for its inhumane treatment of migrants and refugees as captured on camera this week, but its reasoning behind that treatment. Refugees are currently being rounded up and deported under “one of Trump’s most infamous immigration policies: Title 42.”

Oliver explains that this “bullshit” statute allows asylum seekers to be turned away under the guise of public health. It’s such bullshit that a federal judge called it “likely illegal,” and Biden’s special envoy for Haiti, Daniel Foote, resigned last week, saying he will “not be associated with the United States’ inhumane, counterproductive decision to deport thousands of Haitian refugees.”

“The Biden administration promised a big shift when it comes to how we treat migrants at the border, but eight months in, where is it?” Oliver said on his show Sunday night.

“All of this is emblematic of a larger confusion, with one White House official even saying, ‘I don’t know what our immigration strategy is at all.’ But we badly need one, and right now. Because we’re currently sending vulnerable people back into harm’s way. And it’s past time for this administration to stop simply telling people who we are, and start fucking showing them.”