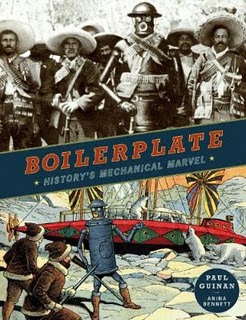 Hopefully J.J. Abrams‘ company Bad Robot won’t live up to its name when it adapts graphic novel Boilerplate: History’s Mechanical Marvel into a feature film. Unless by “Bad” Robot, we mean super sneaky sinister evil robot that’s only pretending to be on our side as he fights alongside Teddy Roosevelt. Yes, that’s a thing the robot does, so this is going to be awesome.

But wait, the robot did a whole lot more in the wonderful alternate (or is it?) history in which he lived. According to Heat Vision, Boilerplate “purports to tell the story of the world’s first robot, who, in the late 19th and early 20th centuries, fought alongside Teddy Roosevelt and Lawrence of Arabia, journeyed to the South Pole and was involved in the silent movie business before disappearing on the battlefields of World War I.” Finally, my conspiracy-of-one theory has been proven correct. I knew the South Pole would be impossible to get to without robot assistance.

For now, Bad Robot has at least two films ahead of Boilerplate on the production schedule, so don’t expect to see history’s metal mystery on the big screen any time soon. It will likely come after my other geeky alternate-history flick for which I am greatly enthused, Abraham Lincoln: Vampire Hunter.

(Heat Vision via I Watch Stuff)