Meet Jan Mendoza, the Woman Who Broke Through California’s Glass Ceiling With a Fire Ax 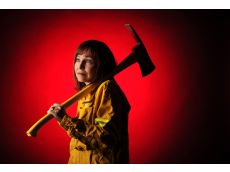 Let this be a lesson to everyone: Do not tell a woman she can’t do something, because she’s going to do it anyway, and it’s going to be a big deal. As in, one of the first women to become a firefighter for the California Department of Forestry (now known as Calfire). That’s what happened to Jan Mendoza nearly 35 years ago, and now, she’s written a book about becoming the first female firefighter to take on the California wildfires. Allow me to also mention that she followed up her firefighting career by touring as a musician. So, yes — Jan Mendoza probably has the best stories to tell by a campfire, which she will also be able to keep in control (the fire, that is).

Mendoza’s groundbreaking career with Calfire only lasted one summer, but it began a new era for the department and proved to Mendoza that she could do anything. And it all began when she heard some guy complaining about female firefighters, then telling her she was “too small” to become one anyway. So, to that she replied “That’s it. I’m doing it.” And she did! Probably not to prove to some random jerk — but to see if she was up for a challenge. But while her time at Calfire was short, it gave Mendoza every reason to try everything else in life. Because once you’ve taken on one of the most dangerous elements of nature by walking into it head-on, there are very few things that will scare you.

“It really showed me that I could do something totally out of the box,” she said. “I go through life and tell myself, ‘You’ve fought forest fires — you can do this.'”

While Mendoza was part of a landmark in California’s firefighting history, women still only make up about five percent of the state’s firefighters. After conducting a quick search, it looks like the percentage of women who pass the tests and become firefighters hovers around four percent nationwide. (That link is from 2008, so it’s fairly recent.) Could it be because the heavily male-dominated environment is unaccommodating for women, because of chauvinistic behavior and/or ill-fitting equipment? That certainly might turn some women off and prevent them from joining the force. But as someone who comes from a family of firefighters, let me say that it takes a certain “circuitry” to be the kind of person who voluntarily walks into a fire. My dad comes from a long line of firefighters, going back to when our ancestors lived in Germany. Yet I didn’t, nor did my brother, nor any of my cousins become firefighters. We just don’t have “it.”

Jan Mendoza has “it,” that fearlessness. And she carried that with her throughout her life, even beyond her time as a firefighter. But it wasn’t not about proving herself to just that one guy — her size (she was 5’2″, 95 pounds when she signed up for training at 18) as well as her gender was working against her. Her chief had known he was “getting a girl,” but Mendoza recalls that “[he’d] hoped [he] was getting a bigger one.” No one thought this tiny young woman could save anyone from anything.

“They did not think I could take care of them in an emergency situation,” she said. “It was really hard for me to swing that ax, it was really difficult for me to lift that hose, but I tried. What I didn’t have in size, I made up for in attitude.”

Now 52, Mendoza has a lot to brag about. After her career as a firefighter ended, she became a volunteer firefighter before moving on to tour with famous singers and bands including James Brown. James “The Father of Soul” Brown. Her current career is in media relations for the Department of Motor Vehicles.

You seriously want to read her book now, don’t you?

Proceeds from Fire Girl go directly to the Wildland Firefighter Foundation, and while you’re at it, check out the site that Mendoza set up, Wildland Fire Women, where female firefighters share their own stories about their experiences on the force.