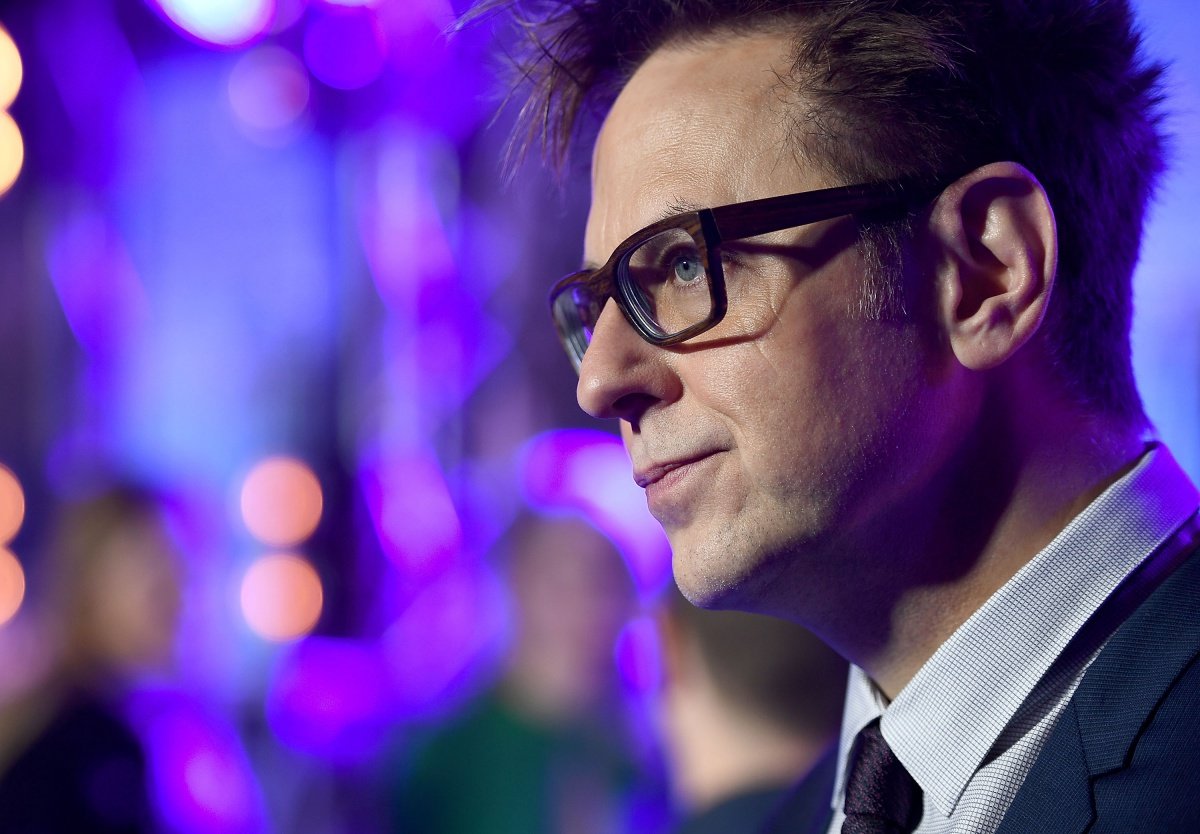 [TW: Rape and Pedophilia “jokes”]
Director James Gunn has been fired the upcoming Guardians 3 film in light of old tweets that were dug up by a conservative personality showing that Gunn made jokes about rape and pedophilia as late as 2012. 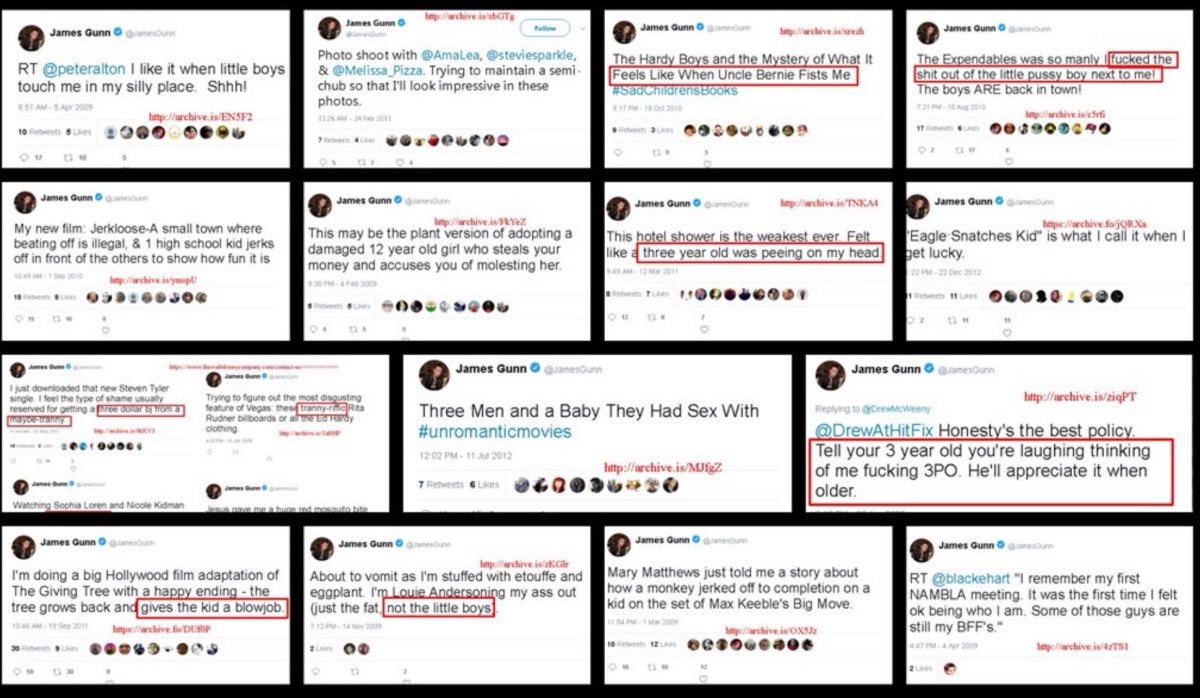 Gunn did take to Twitter with his own statement saying that he regrets those jokes, but that he doesn’t “blame [his] past self for this” and that he wasn’t living out any of the things he joked about which he says is a “weird statement to make, and seems obvious.” Except no, it doesn’t, and you should gladly shout from the rooftops to anyone who would hear it that you would never engage in rape or sex acts with children. 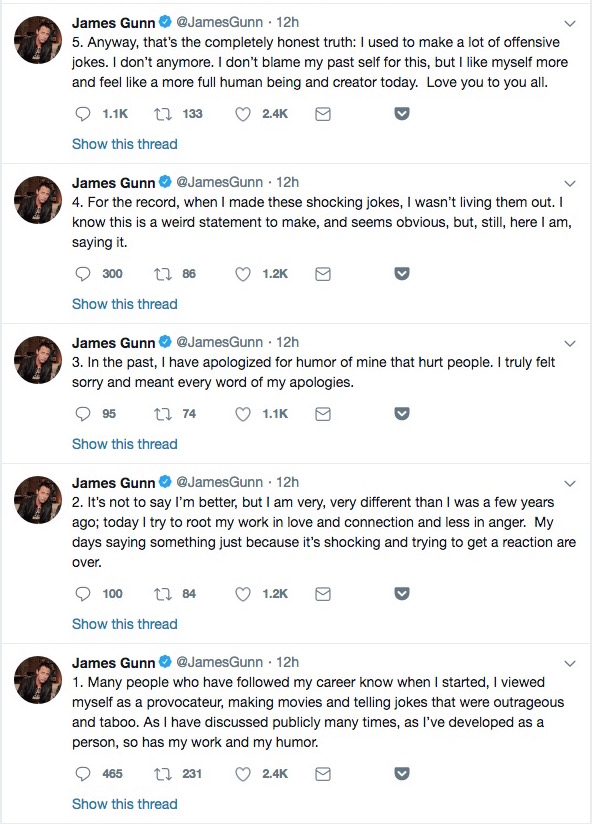 Disney has acted swiftly and made the following statement, reported by The Hollywood Reporter: “The offensive attitudes and statements discovered on James’ Twitter feed are indefensible and inconsistent with our studio’s values, and we have severed our business relationship with him,” Walt Disney Studios chairman Alan Horn said in a statement.

Gunn being removed from Guardians was the right move, and while there will, of course, be those who will say “they were just jokes” and that he has “grown” since then, as far as I’m concerned, if he had really grown from them he would have (a) deleted them and (b) not frame the jokes as part of his “growth.” He made them in his 40s. He wasn’t some young child or a fresh kid trying to make a name for himself by being “edgy” on the internet. By 2009, he already had multiple films under his belt and went on to make Super the next year. Gunn should have been the hardest critic of himself if he had really grown from it, not say that he doesn’t blame his past self. He 100% should.

That being said, the fact that this was “unearthed” by a conservative personality should not be ignored. Not because it delegitimizes the criticism that Gunn is now rightfully facing, but because it was done to due to his politics. The person who brought these tweets to the public forefront is a pro-Trump, fake news promoter who spread propaganda about Pizzagate even though it was debunked. He is a racist, an anti-semite, and encouraged his Twitter followers to target one of the women who came forward about Roy Moore attempting to have sex with her when she was 14 years old.

This man doesn’t give a fuck about sexism, rape, pedophilia or the actual content of Gunn’s words. He did it because Gunn has been a very outspoken liberal and bringing up these tweets was a “gotcha” moment. He is a shit-stain and that should not be ignored when discussing this. Not to mention the hypocrisy of the other actors, writers, etc. Disney still has on their payroll. Plus, when non-Trump supporters did talk about Gunn’s history of making shitty comments, nothing was done.

Okay new, morally sound Disney. Gunn said some heinous shit. But is Johnny Depp still on your payroll for Pirates? Be consistent.

I’m not going to sit here and act like I’m sad about Gunn being fired—I probably would if his statement was a bit harder on himself about what he said, why he said it, and looking back on how he managed to be so stuck in that mentality in his 40s. Still, I loved Guardians Vol. 2 and the dynamics and character he created for the screen. Hell, I enjoyed Guardians more than Wonder Woman. I will miss that, but it is not worth defending the indefensible.

Gunn’s current pinned item on his Twitter account was a promo for the Hall H event he was meant to have Friday at 6:15 pm during SDCC.

My words of nearly a decade ago were, at the time, totally failed and unfortunate efforts to be provocative. I have regretted them for many years since — not just because they were stupid, not at all funny, wildly insensitive, and certainly not provocative like I had hoped, but also because they don’t reflect the person I am today or have been for some time.

Regardless of how much time has passed, I understand and accept the business decisions taken today. Even these many years later, I take full responsibility for the way I conducted myself then. All I can do now, beyond offering my sincere and heartfelt regret, is to be the best human being I can be: accepting, understanding, committed to equality, and far more thoughtful about my public statements and my obligations to our public discourse. To everyone inside my industry and beyond, I again offer my deepest apologies. Love to all.

This statement was much stronger than before and I’m glad he is taking full responsibility for his words without making caveats for it. As stated before, Gunn made the comments and therefore any blowback he gets from them is deserved. However, the fact that Disney was most likely aware of his jokes, the issues surrounding him, and his filmography makes it very suspect that they take action only after radical Trump supporters decided to pretend to care about morals.

(via THR, image: Photo by Ian Gavan/Getty Images for Disney)