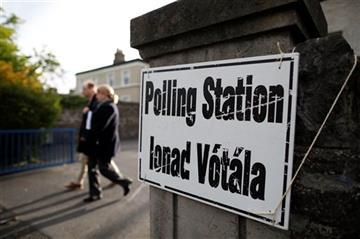 Today’s another one for the history books. In a popular vote of 62% in favor and 38% opposed, Ireland has become the first country in the world to legalize same-sex marriage as a nation.

This is really surprising, considering how, well, Catholic the country is. Also considering the fact that it has a long history of human rights violations against women. Still, baby steps.

According to The Daily Beast:

Strongest support for the proposed change to the Irish constitution—voters were asked whether or not they wanted to insert a line into the constitution saying, “Marriage may be contracted in accordance with law by two persons without distinction as to their sex”—came from urban centers and the capital Dublin, home to 500,000 of Ireland’s 4.5 million citizens. Up to 73 percent of people in the Dublin suburb of Dun Laoighre, for example, voted Yes. The suburb of Ranelagh was 84 percent in favor.

But the change didn’t only have support in the larger cities:

However, there was surprisingly strong support for the measure in many rural areas. Tallies from the conservative heartland of Cork North West, for example, which voted against legalizing divorce in 1995, indicated 54 percent ‘Yes’ versus 46 percent ‘No.’

In another deeply traditional and predominantly rural area, Donegal, the result was 54 percent to 46 percent for the ‘Yes’ side.

Only one constituency voted No.

The argument for the “Yes” vote was put really well by one of Ireland’s most popular musical exports (and rabble-rousers):

Another modern Irish tradition was observed when singer Sinead O’Connor penned an open letter—this time to her former partner, newspaper columnist and No campaigner John Waters, who has argued that same sex marriage will threaten family life and children’s well being.

Sinead wrote, “You and I didn’t ever live together in our lives. Our daughter was half the time with each of us until 13, when she decided to stay fully with me. She is now 19 and one of the most incredible women on earth. She didn’t come from the core family you are talking about. And she is my core heroine.

“Our own staggering daughter is the living contradiction to your argument.

Way to go, Ireland. Here’s hoping the United States won’t be far behind.