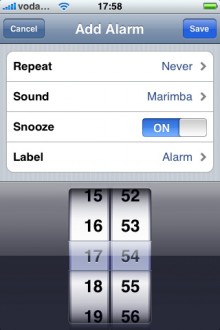 Americans still have a week before Daylight Savings ends and we’re plunged into sepulchral darkness in the mid-afternoon, but this past weekend, Europeans made the switch to Standard Time. (Central European Standard Time in most of Europe, Greenwich Mean Time in the UK.) Many of their iPhone alarm clocks apparently didn’t get the memo, however.

While the iPhone’s main clock automatically made the switch on Sunday, the alarm did not due to a bug in iOS 4. Apparently, if you have an alarm set for anything other than “every day,” (and many people don’t have running alarms over the weekend, so it’s no surprise that they missed the bug when it first manifested on Sunday), the iPhone alarm will go off an hour late.

According to Engadget, this same bug hit Australians a few weeks ago when they made the clock switch; at the time, Apple had promised to fix the bug with a software update. If they don’t do so by next weekend, expect a lot of tardy officegoers stateside next week.