The Battle Over iPad RSS: The New York Times Forces Out Pulse, Justifiably – Update: Pulse Is Back 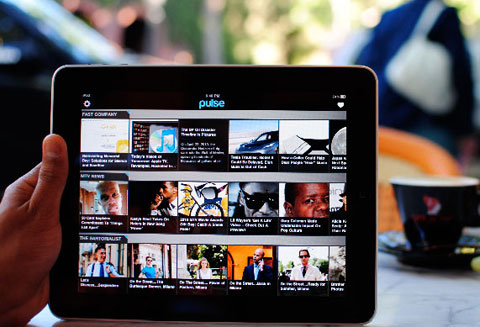 According to a Wired.com report, there’s a good reason that Pulse, an app providing a slick, simple layout for browsing RSS feeds, has been removed from the app store. This app had been praised by none other than Apple lord Steve Jobs just yesterday morning, and has been downloaded over 35,000 times, Wired reports. For some time, it was the most popular paid app on the market.

Update: Pulse is back in the app store mysteriously, for its original price. Details on the rationale are still unknown.
Disclaimer: While some of the speculation below is now obsolete, it still offers a perspective on why this happened in the first place, and could be relevant as the conflict moves forward and the Terms of Service are examined.

The New York Times, though, could not allow Pulse to continue its practices.Here is an excerpt from the request NYT made to Apple, courtesy of the Wired.com report:

This may sound like they’re accusing Pulse of stealing content, reducing the number of hits NYT gets, and thus recuding its revenue. Pulse expressly doesn’t do that. It functions like most RSS feeds, wherein it displays a preview and you must click to the actual Times site to read the full story. But also, it doesn’t seem like that’s really what the Times was accusing them of anyway.

NYTimes.com Terms of Service, paragraph 2.2: “The Service and its Contents are protected by copyright pursuant to U.S. and international copyright laws. You may not modify, publish, transmit, participate in the transfer or sale of, reproduce (except as provided in Section 2.3 of these Terms of Service), create new works from, distribute, perform, display, or in any way exploit, any of the Content or the Service (including software) in whole or in part.

Basically, it means that any service that charges money to give you access to NYTimes content is infringing on the Terms of Service. Pulse is clearly not the only paid RSS app, so it’s odd that they’re the only one that’s been blocked like this so far. It could be just the beginning of a major Times crackdown.

There is a quirky twist here in that the Times recently ran a review of Pulse which was quite favorable.

Now, the people over at Wired seem pretty anti-Times on this:

“That’s right. The poor old Times has managed to gain 35,000 subscribers in a few weeks, without doing a thing.”

“Is the NYT planning to comb through every app in the App store that links to its site and whine to Apple about it? Based on these petty actions, the answer could be yes.”

But let’s take a look at this issue for a second.

The New York Times is acting entirely within its legal rights. Developer must abide by the Terms of Service if they wish to include the content, which a lot of them understandably do. Also, is it really so unreasonable to not want others to make a profit off your own work? A lot of being gather news from RSS feeds without clicking through to the linked news source.

There’s also an argument to be made that the Times prides itself on providing a certain amount of free content to its readers, and the view that news should be something that is free to the people. I’m not saying that the Times is complaining to Apple for issues of grand-scale journalistic integrity and the rights of the populous, but the ideals are still there even if they’re not the primary motivator of the Times legal team.

If the Times wants to have restrictive Terms of Service regarding the use of its web content, then it has every right to do so. Nobody is forcing these RSS apps to include The New York Times. If all these apps remove the Times, then one of two things could happen. Either the Times would amend its policy, seeing that they were better off before, or people would get to the Times the way they always have before: directly or through free RSS services.

I’m not saying Pulse is a villain, though. I don’t believe that they knowingly went behind the Times‘s back in some attempt to steal from them. They just offered a service for a fee that seemed reasonable, but turned out not to comply with the contract they automatically were making with the Times.

So Pulse, I see you as an innocent bystander here. Do what you can to work things out with the Times or just go on without them. And Times, see this through to the end. If you’re going to maintain this policy, put in the effort and find all the infringing parties. And Wired, don’t blame the Times for upholding a legal policy they’ve had for years that nobody really made such a big fuss about until now. If the Times is singling out Pulse, that’s one thing. But if they’re putting in the effort to get rid of all the pay services that link to and use their content, then they are legally allowed (and kind of even required) to do so.