Despite a Torrent of Reviews, Tech Elite Withold Final Judgement on iPad 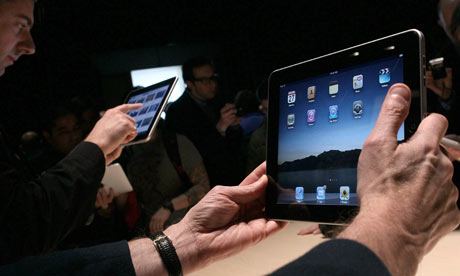 For a little while now, the elite of the tech journalism world have been behind closed doors, testing the Apple iPad ahead of its release this Saturday. And after sitting down with the device — which Apple is trumpeting as the future of computing, while critics fear it as foretelling the coming infantilization of user interfaces — they’re actually pretty impressed! Here’s what the Important Tech Writers of Our Time have been saying:

David Pogue – The New York Times
Pogue writes, “The Apple iPad is basically a gigantic iPod Touch.” For him, while the iPad is limited in terms of content creation, it’s a wonder at allowing consumers to consume that content.

“…the techies are right about another thing: the iPad is not a laptop. It’s not nearly as good for creating stuff. On the other hand, it’s infinitely more convenient for consuming it — books, music, video, photos, Web, e-mail and so on.”

Walt Mossberg – WSJ and All Things D
Mossberg found that the longer he used the iPad, the less need he had for a laptop, reserving the latter for heavier editing and, again, content creation. For him, it all depends on how you use your computer.

“All in all, however, the iPad is an advance in making more-sophisticated computing possible via a simple touch interface on a slender, light device. Only time will tell if it’s a real challenger to the laptop and netbook.”

Edward Baig with Jefferson Graham – USA Today
Baig writes that the iPad is not about what you can do, but how you do it. He notes that finding a space between smartphones and laptops is treading in unmarked territory, but that Apple “nails” it here.

“Apple has pretty much nailed it with this first iPad, though there’s certainly room for improvement. Nearly three years after making a splash with the iPhone, Apple has delivered another impressive product that largely lives up to the hype.”

Xeni Jardin – Boing Boing
Jardin writes a rather laudatory review, stressing the beauty and “sensuality” of the overall iPad experience while also hankering for what the iPad has yet to achieve.

“I like it a lot. But it’s the things I never knew it made possible — to be revealed or not in the coming months — that will determine whether I love it.”

Each piece touches on these flaws and merits:

But! Almost every major reviewer also wrote something to the effect of: “Eh…I can’t quite decide yet.” (See Mossberg’s “Only time will tell.”)

Are tech journalists refusing to make tough decisions on the most important product launch in years? Or would it actually just be asinine to predict the success of the first shot in the tablet revolution — tantamount to predicting the impact of the GUI in 1969, or Bubble Memory in the 70s?

(Hint: it is probably a little of both.)