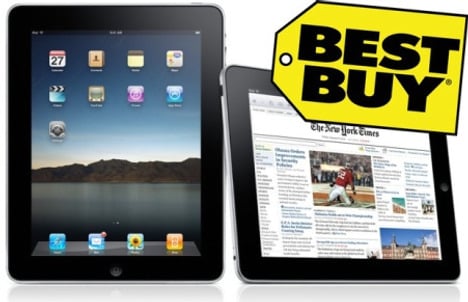 According to Best Buy Chief Executive Brian Dunn, Apple’s iPad is eating up to 50% of PC laptop sales.

Consumers aren’t just buying up iPads left and right as an alternative to Mac laptops, as the iPads are equally cutting into Windows laptop sales as well. Due to this, Best Buy plans to expand its iPad distribution to every one of its stores that does not yet carry the Apple tablet, clearly displaying the sales prominence of the gadget. Chief electronics analyst for NPD Group Inc., Stephen Baker, says the market is trending differently now with mobile devices on the rise.

The market is becoming an environment where consumers replace products with new ones, rather than upgrade old products to newer iterations. Though one may first suspect tablet computers are something of a niche market, relegated to technofiles and early adopters, their biggest adopters are consumers replacing what they consider harder-to-use laptops. The iPad covers most, if not all, of the casual PC user’s needs, so dispensing with the larger, generally more expensive laptop would seem like a logical move.

iSuppli Corp. analyst Riddhi Patel suggests that old products with new or upgraded features aren’t driving sales anymore, but sales are driven by entirely new products. If he’s right, it would be yet another logical reason why the most prominent and easy-to-use tablet PC on the market would eat into sales of other products. At that, 50% sounds a bit high in such a short time, no?

(The Wall Street Journal via Wired)