Dell Executive Says iPad Will Fail in the Business World 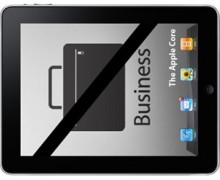 Dude: Dell’s global head of marketing Andy Lark has Apple fans in a furor over his recent dismissive remarks about Apple’s future in the tablet market that it more or less created.

Lark, speaking to CIO.com: “Apple is great if you’ve got a lot of money and live on an island. It’s not so great if you have to exist in a diverse, open, connected enterprise; simple things become quite complex.” Per Lark, Dell is the company that is poised to win the enterprise market in the long run because “the majority of [Dell’s] business isn’t in the consumer space.”

Apple fans might laugh this away, but it’s plausible enough: Android OS is free whereas iOS is priced and proprietary, and the former is projected to overtake the latter in the tablet space within the next few years. But part of the iPad success story is that right now, Apple is steamrolling its competition on price as well as consumer-friendly features. Without a contract, Dell’s 5″ Streak phone/tablet hybrid costs more than a 16GB Wi-Fi iPad 2, at $550 vs. Apple’s $500. Which makes Lark’s thoughts on pricing very odd indeed:

First: If you’re going to go tablet, you probably don’t need a keyboard or a mouse. Second: Even if you do, that whole package should cost at most about $1000 if you go with a 64GB iPad 2 with 3G, and if one is operating a thrifty business where workers presumably have Wi-Fi access, it’s only about $650 to get a keyboard, mouse, and case with a 16GB Wi-Fi iPad 2. A business that’s willing to stoop to buy new, first-gen iPads for $300 (Verizon’s price) doesn’t even crack $500 for the total package.

It seems plausible enough that the iPad will eventually be overtaken in business, but right now, it not only appeals to daiquiri-sipping islanders, but people who want to buy things cheap.

Lark’s remarks take on an added dash of chutzpah when you reflect that Apple is more than ten times Dell’s size right now in terms of market capitalization.

(CIO.com via Techmeme, TUAW. Title pic via The Apple Core)