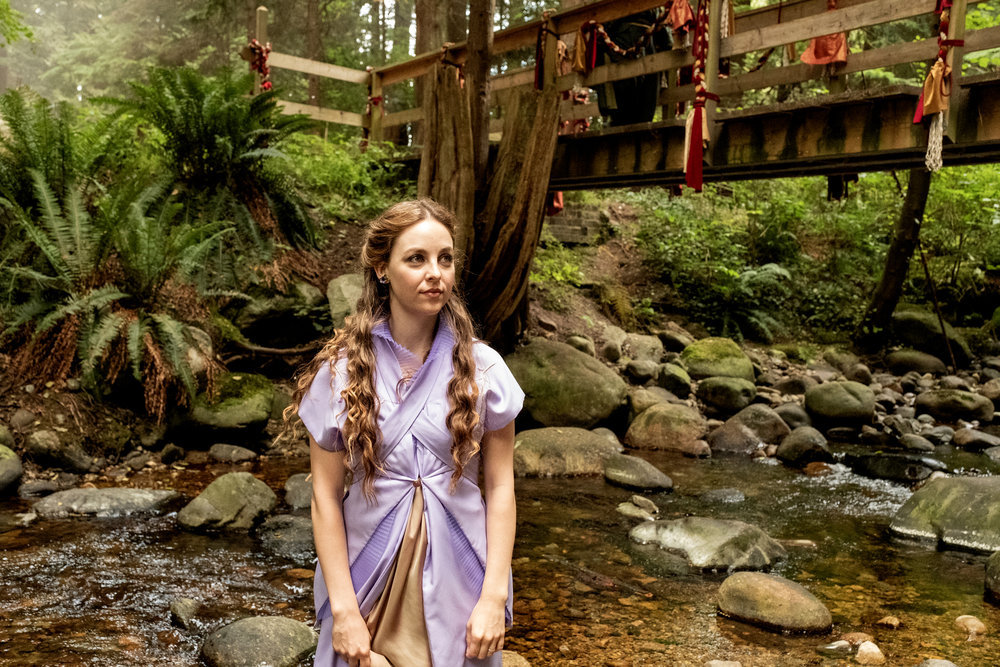 Brittany Curran in the season four episode “The Side Effect.” (Eric Milner/SYFY)

The Magicians never stops surprising us. Whether it’s infidelity revealed through sexually transmitted lycanthropy or soul-bruising character deaths, it’s one of the most creative and entertaining shows on television. And if there’s a character that has constantly surprised us with her resilience and optimism despite a lack of magic and a ton of loss, it’s Fen, who went from a humble knifemaker’s daughter to Queen the High King of her realm … and then deposed.

The success of Fen as a character owes so much to the actress that has portrayed her since season two, Brittany Curran. Curran’s energy and ebullience make Fen one of the standouts on a show full of big characters. And Curran took some time this week to talk all things Magicians and Fen with The Mary Sue.

Fen has changed a lot (she was even played by a different actress in her first, brief appearance in season one) but her evolution has been amazing and surprising for Curran. “I wasn’t expecting it at all,” Curran said of her longevity on the show. “When they first brought me onto the show, it was recurring and I was just supposed to do seven episodes, and as season two progressed I started noticing that my storyline was getting bigger then my agent would call me and say “they’ve actually pinged you for another episode!’…When they started really expanding the character, it was awesome.”

Eventually, the showrunners upgraded Curran to a season regular, “and it went from this character that’s small in the book,” to a main presence on the show. When we say Fen is different in the book, we really mean it. She “literally dies after twenty pages in the book…which really concerned me when I read the book,” Curran explained with laughter. 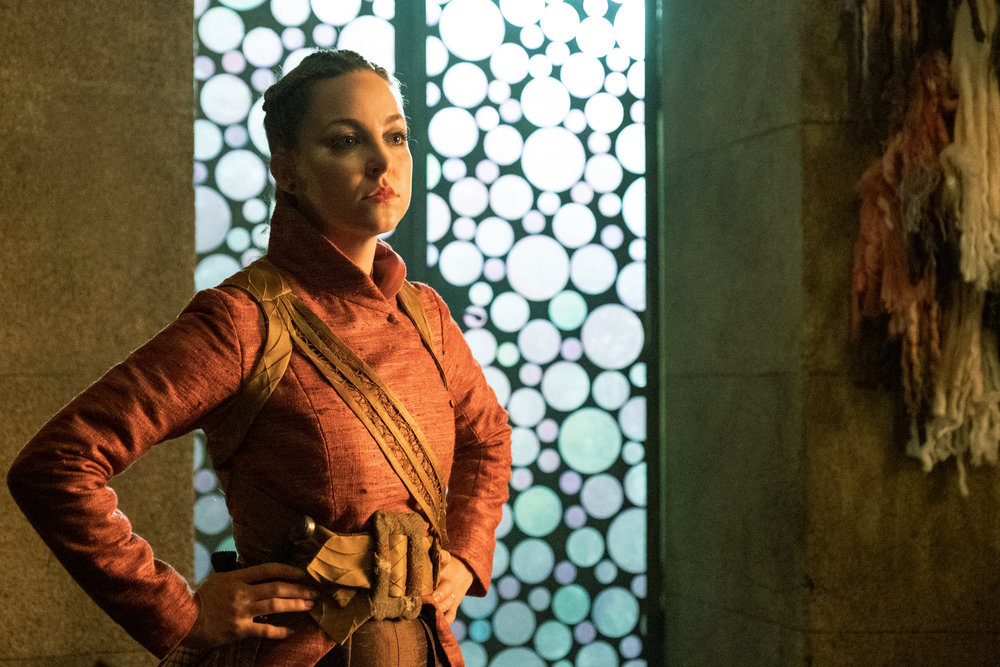 In the books Fen is not only dead quickly, “she is a stout forty-year-old lesbian. Just like me!” Curran jokes. “They departed from the books.” Indeed they did. Aside from living and mostly liking dudes, Fen on the show does have some similarities to her counterpart on the page—they both like to fight and use weapons. “They’re both defenders of Fillory,” Curran notes.

There’s one other big difference. “In the books, Fen actually has the ability to do magic, but she chooses not to use it,” Curran explained. “Which I liked,” Curran added but she wished that was an area where they were similar. “I subtly harass the writers all the time to give me magic.”

As of now, Fen is also the only main character or series regular on The Magicians who doesn’t have magic, and also the only one actually from Fillory. the adult Narnia the various Magicians have ruled. “We joke around sometimes that I’m the only series regular that can’t do magic and I’m the only Fillorian. Which is another fact that I kind of take ownership of, ” Curran explained. “When we have children of Earth coming and ruling our lands I’m probably the most defensive: ‘yeah, but we should probably have a Fillorian on the throne.'”

Fen is a character that’s been through a lot and came out of it stronger and more optimistic. “As an actor, you get really connected to the characters and Fen is such a sweet, kind, pure person that I just kind of extra got protective over her and protective of her,” Curran shared, “and so when they actually started expanding her and giving her her own voice and … just more confidence in general, I loved it.”

“I would get so connected, I’d read a script and I’d be like ‘oh my god this crap … this other horrible thing is happening to Fen, she’s still not sticking up for herself …'” Curran said. “I still would get really indignant about all this stuff happening to Fen.” And a lot has happened! “Lost a child … forced to marry someone as well, who didn’t love her … kidnapped by fairies and lost her toes.” Curren enumerated. Poor Fen “just gets bullied by her own friends sometimes.”

But Fen grew a lot in season four, where she found her strength and became High King of Fillory after deposing Margo (Summer Bishil) at Margo’s insistence. And she still remained herself. “I feel like it’s good to show people that have a more quiet strength and might not be the obviously strong person,” Curran explained. “Or the obviously outspoken person…I like how Fen is on the other end of the spectrum but she’s just as strong as some of these people.” She added: “Now—not in the beginning, but she’s getting there.” 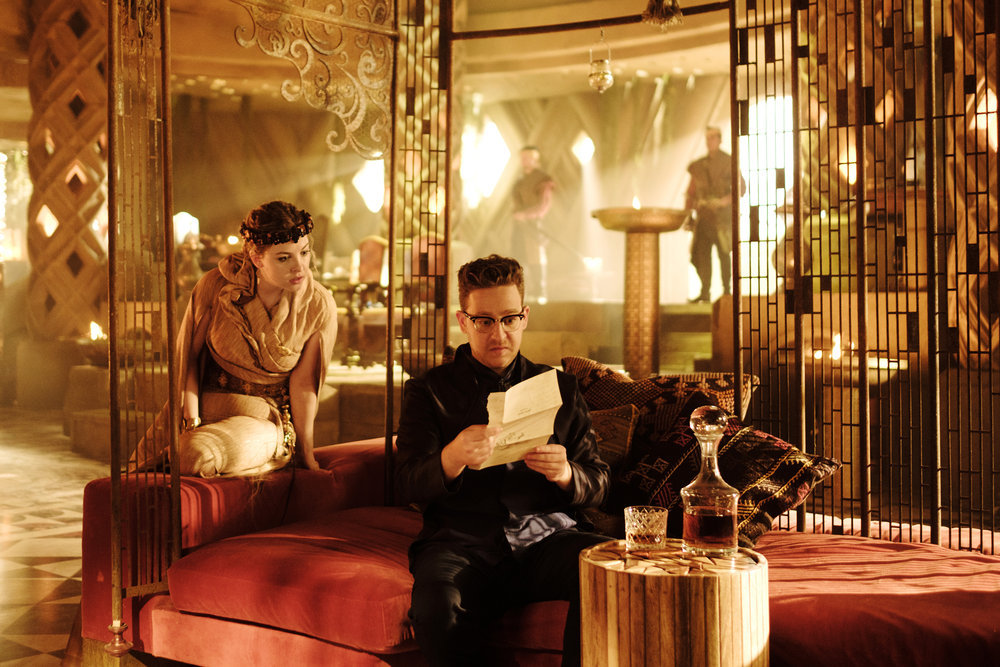 Curran and Einhorn in “The Wrath of the Time Bees.” (Eric Milner/SYFY)

But being High King didn’t work out well for Fen, or for her co-regent, Josh “The Fresh Prince” (Trevor Einhorn). They were deposed and Fillory is now ruled by the Dark King (who we discovered last week is a stone cold FOX) … but that was 300 years ago, thanks to some time magic. Still, it was a bit sad to not see Fen have a glorious reign.

“I was bummed,” Curran shared. “I honestly thought that Fen and Josh—and especially Fen because she’s Fillorian—would have been better rulers … Even though she was never groomed to be a ruler, and power is never what Fen has been after. She’s just been after what’s the best for Fillory. But I thought that would translate into her being a better ruler.”

So even though Curran had fun with the sillier scenes in “The Wrath of the Time Bees”—especially Fen whittling some new toes in the throne room—she wished Fen could have been more “active as a ruler.”

Fen’s sort-of death in the past at least led to some fun scenes for Curran, including one where her ghost talks to Eliot while she’s hanging dead from a tree. “That was one of the first scenes I shot of the whole season!” Curran said of the creepy and funny scene. Not only was she happy to work with Hale Appleman again (“I love working with Hale!”) but she got to act with a finicky noose around her neck and do some cool effects work.

“It’s like this serious scene because we now find out Fen is dead and has been literally been being tortured and living out her death for like three hundred years, which is really horrific,” Curran explained. “But also in Fen’s cheery little way she finds a way to be happy and playful and thankful.” That attitude is certainly one we can all learn from.

Overall, things worked out for Fen and the Fillorian court as they traveled forward in time to meet Eliot and Margo. “I just don’t think they were prepared to be left in the past forever, I don’t think they had a long plan and didn’t think on their wooden toes,” Curran explains. But they did hook up, leading to Fen, like Margo, sharing Josh’s “sexually transmitted lycanthropy.” But that “doesn’t really affect her so far,” Curran assured me.

So how will Fen function now that she’s deposed and displaced in time, and on the outs with some friends? “One of the things I love about this season is that Fen tends to get paired up with a person and then is kind of like a sidekick to them which I think is part of why Fen has felt like as side kick in her own life for so long,” Curran shared. “There’s a lot of layers to Fen not being her own person and just doing what other people want her to do. So this season we will actually see Fen make new relationships and more real relationships.”

This means Fen will be standing up for her own wants and needs more. “Fen will actually start, in her own Fen way, demanding to be respected more and will spend more time with more people rather than latching on to one person.” Curran added: “That just allows her to make her own decisions … and yeah, Fen will really surprise us as an audience a couple times.”

Meeting more people means Curran finally got to work with her best friend on the show, Jade Tailor (Kady), who she had never worked with before. Their first time acting on-screen together actually came in one of the delightful pre-season “Fenstagram” shorts shared on social media. Curran describes the filming of “Fen! Live from Fillory!” as “literally one of the funnest days of my career, no exaggeration.”

It was a bit hard for Curran to have bestie Tailor acting as Kady being mean to her, but it was also fun and we can share that this won’t be the last time we see Fen and Kady together.

It’s also not the first time Tailor and Curran have worked together. They recently collaborated on a short film written by Tailor and crewed by many of the people who work on The Magicians, and they’re co-producers on Curran’s own passion project: a documentary about Scotch Whiskey called The Water of Life. 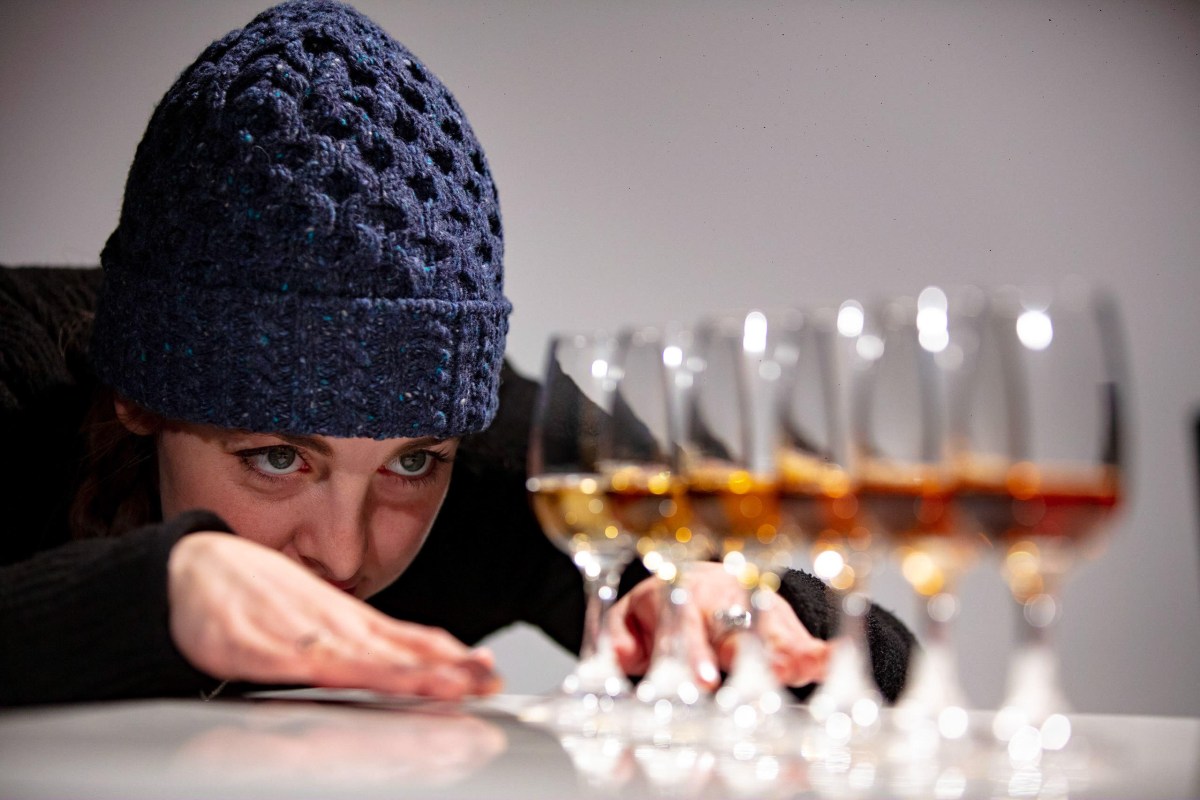 The Water of Life has wrapped filming in Scotland, Ireland, and London and is now in post-production with hopes to get it to festivals soon —both whiskey and film festivals—where screenings will include whiskey tastings. That sounds like the best way to see a movie.

Whether it’s chatting about Whiskey or Fillory, Brittany Curran is a delight, and we can’t wait to raise a glass to her and Fen as The Magicians continues season five.

The Magicians airs Wednesday on SyFy at 10:00 pm Central and is also available on the SyFy app.