Also, get some insights on a few favorite fan theories! 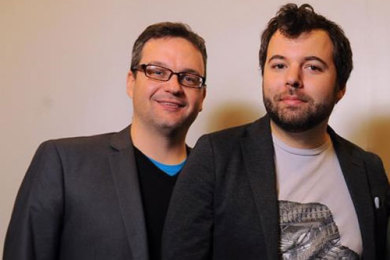 “What the heck is Welcome to Night Vale?” Catch up on our recaps!

Welcome to Night Vale is a podcast full of the delightfully strange and the fascinatingly gruesome. It’s also been capturing the hearts of fans for more than three years now. (Not literally. Okay, maybe literally. Nobody’s been able to prove anything yet, alright?) Recently, I was able to speak with Night Vale’s creators, Jeffrey Cranor and Joseph Fink, to get some insight into just what makes this wonderfully weird world of theirs work.

The basic origins of the show were simple: Cranor and Fink had worked with each other in theater in the past and wanted to do another project together. Fink was interested in trying out podcasts as a medium, and one day he surprised Cranor with the first script for Welcome to Night Vale. Fink explained some of his influences as “I came at it from a love of conspiracy theories and a love of single-person storytelling.” The next step was approaching their friend Cecil Baldwin, who was known for having a great radio voice. It all came together, and history was made.

Since that humble beginning, Night Vale has taken off to extraordinary heights. They now have more than seventy episodes recorded, have a book coming out in October, and have had live shows all throughout America, Canada, and Europe (with a UK tour this fall). According to Cranor, the busy schedule is exhausting but a lot of fun. “It’s hard to find anything to complain about when you’re writing a show with a friend, doing tours, and doing something you like.”

It can be tricky to work on a project when two people are writing for it, but Fink and Cranor seem to have a solid system worked out. “Generally each episode is written primarily by one of us,” explained Fink. “We usually alternate, but sometimes things get flipped around so that one person primarily writes two in a row. One of us will write a rough draft, then send it to the other who will edit it and maybe add some jokes or fix a continuity problem.”

Cranor elaborated that he will often write the main plots of his episodes and then go back to add the sections that stand on their own. “I’ll have notes that say ‘financial report here’ or ‘traffic report here’ or ‘mention that thing about Hiram that we talked about here’.”

As for the inspiration for the episodes, Fink explained that a lot of it came from his experiences of what news tends to be important in small towns, such as high school quarterbacks, construction projects, and local politics. “I think a lot of it comes from taking the mundane and moving into the bizarre. You take something simple that fits in [a small town setting], and then the next step is you find something truly horrifying and make it more mundane. The City Council is this horrible mass that speaks as one, but then they’re just issuing rules about parking or things like that.”

Since Night Vale tends to be a very consistently pleasing show, I also asked to what extent the creators keep fan demand in mind when writing their episodes. Surprisingly, the answer was not at all. “We started the show by writing stories that appealed to us,” said Fink. “It seems unwise to change that at this point.” For Fink and Cranor, it would mean unnecessary complications to a successful writing strategy to try and cater to any particular fan demand.

As the writer of the Welcome to Night Vale recaps, it seemed like a good time to see if I could get some insight into a few popular fan theories. Sadly, according to Cranor and Fink, Cecil isn’t a psychic character. He may know what is going on all over the city at any time, but that’s just a device of “narrative convenience,” as Fink put it. They also had no idea what I was talking about when I asked if Earl Harlan was Cecil’s ex. Sorry shippers, but it looks like that vessel is officially losing its canon.

However, I did get a few more answers when I asked about the obvious commitment Cranor and Fink have had toward including diverse characters and actors. Fink explained, “We set out to write about the people who actually existed in the world. We wanted to write about the world as it was. Sadly, that’s a bit rare in other narratives … In terms of casting, we do try to cast people from different places and backgrounds. It tends to lead to a more interesting cast and better performances because not everyone is speaking from the same place.”

Cranor added, “I think a lot of it comes from our experience in theater in New York. We just know a lot of people who are super talented and from different backgrounds. The lovely part of it is it hasn’t been difficult for us to find great people. It’s amazing for us that people in Hollywood, who access to so many more talented actors, still wind up often casting all white people. [Casting diversely] is a conscious choice, but ultimately it’s not a hard one.”

We ended the interview with a few light questions. Both Cranor and Fink discussed their favorite characters. They both really like Michelle Nguyen, the owner of Dark Owl Records and relatively new character. Maybe that means we’ll be hearing more from her soon? Cranor was also very fond of Dana while Fink enjoys former mayoral candidates Hiram McDaniels and the Faceless Old Woman Who Secretly Lives in Your Home.