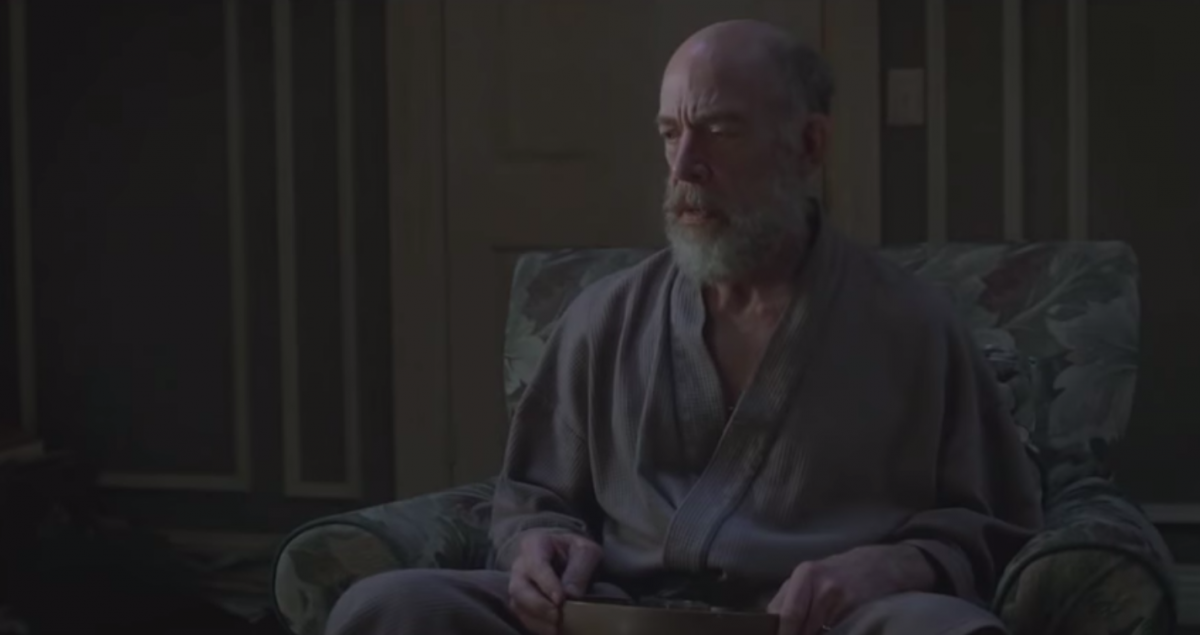 A movie centered around the beauty of possibilities, I’m Not Here brings us another star performance from the always astounding J.K Simmons. Our full review will come out in early March, but we’ve talked with director, Michelle Schumacher (who happens to be married to Simmons).

Schumacher’s insightful answers are now followed up by Simmons and his responses about Steven, the connection he had to make with Sebastian Stan (who plays the younger version of Steven), and what it was like working with his wife!

In the film, Simmons acts against no one else, alone in his home and never speaking a line throughout the film. It is amazing to watch as he goes through the emotions of dealing with the death of his ex-wife, Karen, and revisiting their life together. I asked J.K Simmons what that was like and how hard it was, as an actor, to bring to bear that pain without the help of another actor or being able to verbalize anything.

There was a bit of a feeling of having one hand tied behind my back, not having the tool of speech in this role, but then, tying a hand behind the back is an old-school training technique for boxers and other athletes, so it ended up being a real learning, growing experience.

It was also very carefully, artfully scripted, so that most of the time, the previous and/or following scenes contributed to the story telling in a way that illuminated my character’s (Well, my version of our shared character’s) perspective.

Through the trailer, you can see that Steven struggles with alcoholism. It is something that could potentially make Simmons’s version of Steven unlikable but, instead, we feel for Steven and what he’s gone through in his life and that is, in part, because of Simmons and his incredible performance.

Asking him about it, it was wonderful to learn that both he and Sebastian Stan worked together through Michelle Schumacher to make sure that they were all on the same page in creating the character, even with Iain Armitage who plays Stevie (the youngest version of him).

I was drawn to the character from the get-go.  His pain was palpable on the page, as well as his essential decency, despite everything.  I think anyone who’s gotten to my age in life has regrets and heartbreaks in their past, and has made choices they would like to have made differently.

I think Sebastian had a similar feeling of connection to Steve, and we made every effort, in collaboration with Michelle, to be on the same page, and to be informed by each other’s work, as well as Iian’s, in creating the character.  I had the easiest part, in a way, because I was the final version of the character, both in the story and in the shooting schedule.

Again, as I’ve stated, the movie ends with the idea of possibilities. What we could have done with our lives or what we still can do. With how our world is currently, the negativity and pessimism that is surrounding us all, I asked Simmons what he felt was important about that message.

I think the idea of possibilities (Infinite possibilities, in fact) and hope for change are important concepts in any time and place.  Sharing the beauty and the pain of life can bring us closer together despite whatever our differences might be.

Finally, I asked what working with his wife was like, what that meant for his more vulnerable scenes. Because it is always an interesting dynamic, to me at least, when spouses or significant others work together on a project to bring it to life!

In a role like this, where I’m emotionally and physically naked, it was wonderful to be directed by the person I love and trust more than anyone on the planet.

I’m Not Here is in select theaters and available on digital download on March 8th.  It is a beautiful look at what our choices can lead to and J.K Simmons does an incredible job as Steven. Check back here for our full review on the film!