The Fox can't run away from his past. 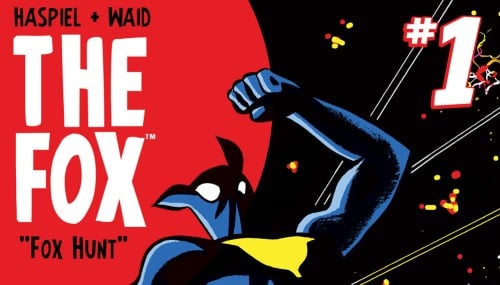 April 15 sees the start of a new ongoing Dark Circle series from Archie Comics: The Fox! Emmy Award winning writer/artist Dean Haspiel and Eisner Award winning creator Mark Waid, the critically-acclaimed creative team behind the recent mini-series The Fox: Freak Magnet, now bring you more strange adventures featuring Paul Patton Jr. AKA the Fox. It all starts when Paul and his son Shinji visit the town of Beaver Kill in “Fox Hunt: Part One – The Situation.” Following the events at Beaver Kill, Paul Patton wonders if he’s getting too old for this hero game. Too bad he’ll have to deal with the return of several old enemies and a million dollar bounty on his masked head.

The original Fox hero debuted in 1940, created by Joe Blair and Irwen Hansen. He was Paul Patten (the name was spelled differently then), an athletic photographer who decided to give his career a boost by becoming a crimefighter, ensuring he’d be the first on the scene. In 1984, we met Paul Jr., who took up the mantle of the Fox and worked alongside the Mighty Crusaders. With the 2012 relaunch of Archie’s Red Circle Comics imprint (which focuses on superheroes), Paul Jr. is a now a middle-aged photographer, superhero and family man, a guy who’d like to spend more time with his wife Mae and his son Shinji, but has to deal with being a natural magnet for strange villains and bizarre threats. In 2015, the Red Circle heroes are now relaunched under the Dark Circle imprint, which editor Alex Segura described as “a fresh start featuring recognizable names and icons with zero baggage.”

We talked to artist/writer Dean Haspiel about where the Fox’s life will take him next in this new Dark Circle series.

Alan Kistler (TMS): These days, a lot of characters are rebooted from scratch, whether they’ve been missing from publication for years or not. But instead, you kept Paul Patton Jr. as an experienced character who inherited the Fox mantle and is a “freak magnet” whether he likes it or not. He also has a son now, Shinji, who seems more suited to the modern world and is already old enough to go superheroing on his own if he wanted. What inspired you to take this route with the character’s return?

Dean Haspiel: It’s hard to claim that my innovative yet custodial work on the Fox is a reboot. Without having to rearrange much in terms of continuity, I’ve grabbed the Fox’s narrative baton and I’m running him through a marathon of adventures. I found a way to tease some of his past in the first issue of Fox Hunt because I wanted to tell a story about love and letting go of things, the very stuff I tend to visit in my Billy Dogma comics.

Mark Waid wrote a great line for the Fox, “Never cry over anything that can’t cry over you,” and I really liked what that advised. On the surface, “Fox Hunt” may be about a million dollar bounty that threatens the Fox and his family, but underneath it’s a story about a father and his son coming to terms with an extraordinary burden, albeit curse, that challenges their will, mortality and souls.

TMS: This story already seems to focus on contradictory feelings a person can have about their past and future.

Haspiel: As we grow old, it’s normal to recognize and contextualize the things that informed the person you currently are. Your first kiss, your first punch, your first heartbreak, your first book, comic book, movie and song that meant something to you. These milestones change us forever.   I believe that sacrificing stability for doing what you love, coupled with keeping a finger on the pulse of what’s cool and different, keeps us young at heart. Life should be a roller coaster of risks and spectacular disasters so that you know what it’s like to feel alive.

Now that the Fox is a husband and a father, he feels pressured by the responsibility to help raise a family and contribute to his home versus confronting the madmen and monsters that challenge those values. Because the Fox is trying to balance a home with heroism, he is skating an unforgiving crossroad while being tested to do what is right at any given moment. Does he take his son to the museum of the moving image and ignore the bank robber that’s stealing all their money? Or does he pull the mask back on to stop the crook and put his life and his family in danger? The Fox’s greatest weakness is his inability to project manage. And, like me, the Fox also strives for intimacy during a chaotic time when technology is taking over the way we socialize. The one function the smartphone forgot to build into its dream machine is human contact – of which the Fox is morbidly aware of.

TMS: As wild and offbeat as the Fox’s enemies are, the effects of their operations are very grounded. Freak Magnet featured a Satanic social network, while the first issue of “Fox Hunt” discusses water needs and how small, near-forgotten communities such as the fictional Beaver Kill can wind up sacrificed to benefit larger cities. Will the rest of the series feature such real world troubles and dramatize the dangers of new technology and media?

Haspiel: I’ve always had a conflicted relationship with technology. Even though I was a progenitor and champion of webcomics with the likes of ACT-I-VATE.com, Zuda, and Trip City.net, I don’t read comics digitally. I prefer analog. I like how we’re able to lift the veil between creation and creator and consumer, but we’ve come to hopscotch in a dimension of too much information where everyone is suffering attention deficit disorder. We’re no longer interested in what happened 30 seconds ago because we can’t wait for what’s going to happen 30 seconds from now. And, worse, we can’t wait to comment on it, often in a negative way. I’m a culprit of my very own criticism and I’m trying to put things back into perspective. I’m trying to make sense of how we got to here from there. And, it all starts with water.

I’ve been visiting the Catskill mountains ever since my mother lived there for a good 25 years (before she moved to Florida). Mom sometimes drove me to a very long bridge over a huge reservoir called the Pepacton River between two mountainsides, that no person was allowed to swim in, and I learned that a few towns across that stretch were demolished in the 1950s to create a watershed that would funnel water to my kitchen sink pipes in Brooklyn; serving 90% of New York State’s water needs.

I was fascinated by the history and the heartbreak it surely caused for the friends, families and businesses that were sacrificed so I could drink fresh water. I’ve always wanted to write and draw a semi-fictional graphic novel about it… I developed a story that would tackle some of my watershed interests and that’s how Beaver Kill in the first issue of Fox Hunt was initially created.

TMS: Paul inherited the Fox identity from his father and considers retirement himself. But is that really possible for a person who’s a “freak magnet,” especially when some of his old villains will be teaming up? Will Paul’s son Shinji inherit his father’s role or is his life headed in a different direction?

Haspiel: Paul discovers it’s impossible to put the Fox behind him. He’s too much of a target. If it’s not him fighting crime, it’s his son or his wife or, Hell, maybe his father, the original Fox could return someday. Paul would have to take a vow of silence and climb the Himalaya mountains to a desolate retreat and become a monk before he could consider quitting being the hero. Oh, wait, Batman. Maybe Paul could follow Marlon Brando’s footsteps: win Lotto, buy an island and eat himself to death. Yeah, that’s not gonna happen.

I like the concept that for every hero there is an equal villain. Shinji becomes disappointed in his father’s desire to quit the Fox. So, he foolishly believes he can pick up where daddy left off. And, boy howdy, is there a lesson to be learned there. Fox Hunt dusts off ye olde Red Circle villains from yesteryear while brandishing a brand new bad guy for The Fox family. And, if Shinji decides to perpetuate his family’s legacy, maybe he’ll earn his very own arch-nemesis – if he can survive the fox hunt.

TMS: What’s in store for the Fox’s future and might we get a flashback story to when Paul Sr. wore the mask?

Haspiel: I have a few Fox stories percolating. I recently pitched a very dark tale that involves the original Fox that I feel would make a good trilogy alongside Freak Magnet and “Fox Hunt.” I have a few one-offs that involve a freak show at a circus, and a villain that weaponizes words. Kind of a cross between the way Will Eisner created font-sized landscapes in The Spirit and the horror movie Pontypool.

TMS: What other projects are coming up for you in the future?

Haspiel: Besides working on The Fox and some variant covers for Archie & Dark Circle, I’ll be debuting my new Billy Dogma comic, Heart-Shaped Hole (published by Hang Dai Editions) at MoCCA Fest, April 11 & 12th in NYC. I’ll also be a guest at some Wizard World shows, including Las Vegas, Philadelphia, Chicago, Des Moines and Richmond, VA. I recently drew a Madman 3D trading card, and a poster for the sixth episode of the iZombie TV show; flexing my love for all things Mike Allred.

The Fox #1 hits stores on April 15, with four variant covers.