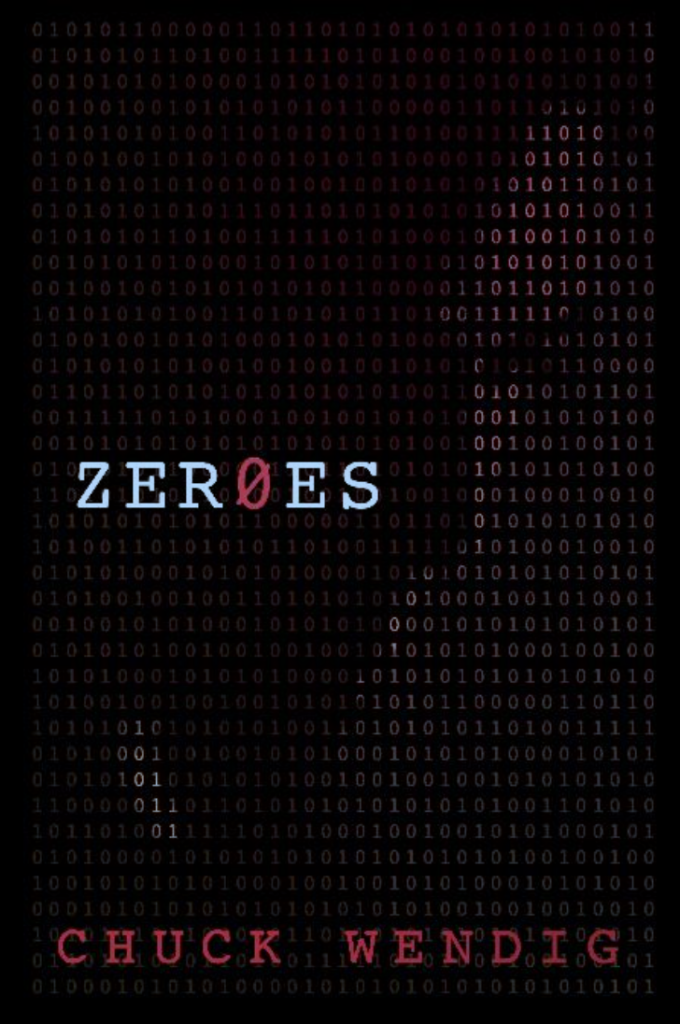 Chuck Wendig’s Zer0es is one hell of a novel that resonates particularly strongly in our day and age. It centers around a motley crew of hackers who find themselves bound together in a fight against a rogue AI that threatens their very lives. It’s exciting, and what’s more: it’s realistic. It’s that kind of near-future realism and these parallels that really make the book for me.

We currently live in a world where some of the top minds in science have all signed an open letter urging computer scientists to maintain the humanity in our technological advances. To think, we’re actually approaching a point in which the singularity is something worth worrying about; that is the stuff of science fiction. Wendig plays with the what-ifs and could-haves in Zer0es, examining our usage and interactions with technology through a fascinating lens.

The Mary Sue recently had a chance to ask Wendig some questions about Zer0es and his take on our current technological developments.

Jessica Lachenal (TMS): What made you want to tell this story specifically?

Chuck Wendig: This is a weird time. It’s wonderful in its many ways, but technology is advancing now at a rate where it is perhaps outpacing our ability to understand the ramifications of its implementation and continued use. The Internet alone has been such a disruptive force—for good and for not so good—that it is changing society. And we offer up so much onto the altar of privacy both actively and passively, you know? Kids are growing up in a world where everything is shared. We share what we eat, who we’re with, where we’re going, what we eat (again because damn if we don’t love to share what we eat), everything.

The horror is already there, implicit in that – but it was on me to turn the volume up a little, and then break off the knob.

TMS: How did you settle on this cast of characters? Why these five hackers?

Wendig: We like to view hacking as this singular subculture, but it’s really not. Hackers come from all walks of life, and it felt like good story to put those people together to see what sparks fly as a result. I know too that hackers sometimes come from marginalized communities, which is both appropriate and interesting – people taking power into their hands in ways that the establishment neither expects nor understands.

TMS: Did you run into any difficulty fleshing these characters out?

Wendig: These are characters very different from me and from each other, so it takes a little extra time to get into their heads and their lives.

TMS: Do you see yourself in any of these characters? Are there any you strongly identify with?

Wendig: I don’t know I’ve ever written a character I don’t see a little bit of myself in – we create these empathic bridges between us and our characters so we understand them, and in understanding them we start to see our story in their stories and vice versa. Wade is a little bit like my father, if my father were a crazy hacker (hint: he wasn’t). I’ve never been a troll, but Reagan’s love of chaos is something I find appealing, if simultaneously terrifying!

TMS: You’ve spoken in interviews before about the hazards of technology’s rapid growth. Did this novel serve as a bit of a working lesson/example of things we should be worried about?

Wendig: I hesitate to call it a lesson – it remains firmly in the land of fiction and entertainment. It’s not really the growth of technology I worry about, but rather how we access it and interact with it. I’ve noted that everyone being connected to everyone and everything is brilliant in a lot of ways, but also dangerous. We like to envision these connections as bridges—polite archways that bring us together. But they’re also doors and windows. You start to realize that anyone can look in—or break the door down—whenever they want to access your digital (and inevitably, your corporeal) life.

TMS: What’s your take on the artificial intelligence open letter/warning signed by people like Stephen Hawking/Elon Musk? Typhon strikes me as the very example of the type of out-of-control AI that they’re worried about.

Wendig: Oh, man, I totally get what they’re saying. Artificial intelligence in the truest sense should have us shivering in our undies. Imagine creating an actual intelligence that we somehow control. A novel like Madeline Ashby’s vN or the film Ex Machina give us a sense of how we’d use those technologies—which is to say, to abuse them. In Zer0es, we should fear the AI. In those two other story examples, I think the AI should learn to fear us.

Wendig: Is Typhon realistic? Not entirely – I mean, she is a construct of my imagination (and parts of her are certainly other AIs throughout fiction, including SHODAN or GlaDOS or even Hal). Certainly her wet-wired origins are more disturbing than what’s possible (though the human brain is its own kind of computer).

Just the same, it strikes grave terror in my heart to think about an artificial intelligence protecting this country. What would it do to keep us safe? How far would it go? What utilitarian algorithms would govern its actions?

TMS: There’s been a lot of talk lately about how hacking in shows and media isn’t portrayed realistically, that the things they show are either too simplified or not even possible (enhance! enhance! enhance!). But speaking from the writing end, “realistic” hacking can be pretty… well, boring. How did you find a way to balance the “realism” with the “exciting” parts of hacking?

Wendig: Ultimately, it’s about striking that balance between absurd PRESS ONE BUTTON TO HACK movie sequences and the actually kinda boring act of sitting in front of a computer to code your way forward. The goal is to not get it right so much as to make it feel authentic. And the larger bit is to make it less about hacking and more about hackers.

The culture of hackers is fascinating. Hackers fill this sort of Wild Westy niche – they’re data-born gunslingers roving the margins of known existence. They’re part of the dark web, wearing their black hats or white hats.

TMS: On that, what kind of research did you end up doing to make sure the processes and procedures these hackers go through are realistic enough?

Wendig: Took about a year’s worth of reading plus talking with friends who are hackers-turned-security consultants.

TMS: What do you hope people take away from this book? What lesson or moral do you wish to impart (if anything at all)?

Wendig: I don’t care much for lessons or moral imperatives with my fiction – certainly I have beliefs and ideas and those translate to the themes of the work, but that’s for the readers to suss out, not for me to tell them. All this stuff is complicated, and no message is black and white preachy do-this-do-that stuff.

For me, I just want people to have a good time. If it makes them think and feel, that’s a win for me.

TMS: If you were me, what question would you ask yourself here?

Wendig: WHO IS TYPHON?

Zer0es is out now at your friendly local bookstore. Give it a look-see, and let us know what you think in the comments!