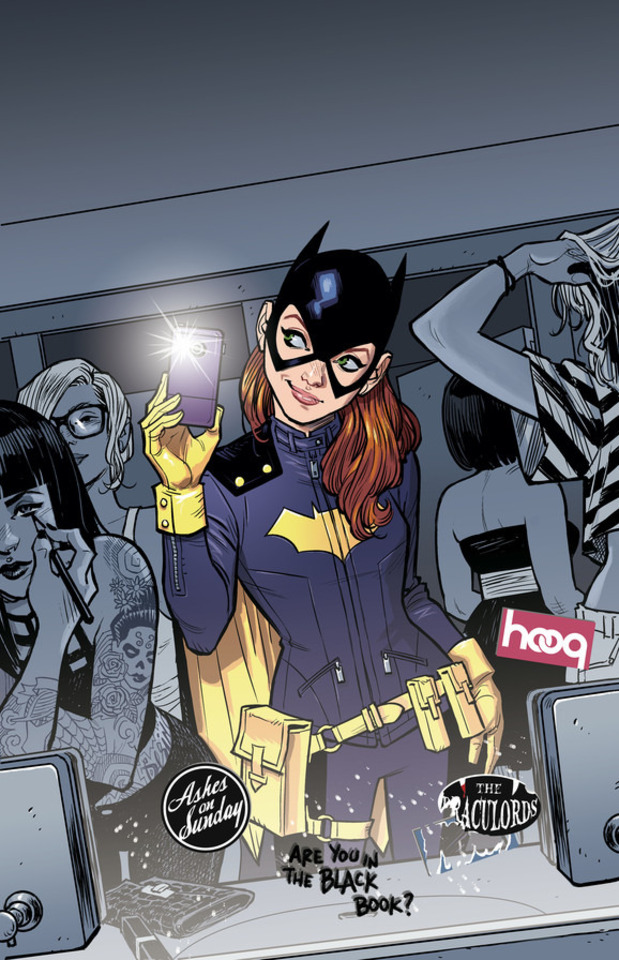 At New York Comic Con, I had the chance to talk to Brenden Fletcher and Babs Tarr about Batgirl, which Fletcher co-writes with Cameron Stewart, and which Tarr illustrates. (We’re extra-pumped for this week’s issue, featuring Alysia Yeoh’s adorable wedding!) The interview began with us trading a few jokes about Batgirl’s costume, which somehow still provokes inexplicable internet ire:

Brenden Fletcher: Dudebros are still — one year later — trying to get their heads around it.

Fletcher: “There’s no way that Bruce would let her out on the street with that outfit!”

TMS: Bruce would be fine with it!

Fletcher: And she doesn’t need a dude to tell her that.

TMS: What is with the implication that Bruce would care about that?

Fletcher: What’s with the implication that Bruce needs to have anything to do with Barbara’s life, other than having provided the symbol of the bat?

TMS: I think there’s an assumption that there would be a paternal figure in every heroine’s life, which — there just isn’t in Batgirl’s world at all.

Fletcher: It was a choice. It was the toughest choice that Cameron and I made from day one — I think this was even before Babs came on the book —

Fletcher: The conversation was, this is a character that was always about her relationship to two men in particular, often a third man. Batgirl has always been about, what does she take from Bruce? How does she relate to her father? When is she going to date Dick again? It’s never about who she is on her own. We made a choice — that’s part of the reason we put her in Burnside. Get her away from her dad, get her away from Bruce, make sure Dick’s not around. Who is she without all these dudes getting in her face, telling her what her outfit should be, how she can’t be on the —

Tarr: [starts up a slow clap]

Fletcher: But seriously! I don’t know if Cameron talked to you about that on the first calls, but that was — for us, it was one of the points of our pitch, talking to the editors: “Guys, we don’t want her attached to Bruce anymore.” Not that she should not have a relationship or not appear in Batman Eternal …

Tarr: It was more, having her stand on her own. What’s her character without that whole world leaning on her? She was part of the supporting cast [in Batman], and we built her own supporting cast now in our book.

TMS: Absolutely. And it’s almost entirely women! And it’s a diverse cast, which I’m sure was also — well, was it purely accidental?

Fletcher: Purely accidental! It was supposed to reflect — it wasn’t like, “we need to make this a diverse cast.” Cameron and I were just looking at our friends. I was living in Montreal at the time, he was in Berlin, Babs was in San Francisco. That cast is reflective of our friend group. Almost directly. Frankie is an analogue of one of our best friends —

Tarr: I had [designed] a girl and she had dreads, and Fletcher was like, “make her look like this” — that was my outline.

TMS: So you can ask her to pose — like, “Can you go sit comfortably on the couch?”

Fletcher: No, no, she travels all the time — I was about to say her name!

Fletcher: She’s an engineer, she’s one of the smartest people that we know. She was in Egypt for a long time, traveling all over the world, super-smart but also one of the hardest partiers I have ever met.

Tarr: [laughs and claps her hands]

Fletcher: One of the funniest, flirtiest, most incredible women I have ever known in my life. That’s Frank Charles!

TMS: That’s awesome. There’s so many women in this story who are refreshingly nerdy while also being really feminine, which is something that I can 100% get behind. They’re going shopping for dresses, then they start talking about programming —

Tarr: I just don’t understand why that always had to be a separation. Why can’t you be feminine and smart? It’s so effed — the selfie cover, automatically people associated that confidence and feeling good about yourself and taking a picture — added narcissism in, and being not-smart. I’m happy to try to break that barrier down.

TMS: Although there are some themes in the book with how selfies and narcissism can eventually be bad. Being a famous persona, as you two are, can have added stresses and concerns. I wondered if some of your own life experiences contributed to that theme in the book? There are these characters who are like, “I’m putting myself out there, and people are misinterpreting it, that’s not how I meant it” — that is a theme for Batgirl, and it’s obviously part of having a public persona.

Fletcher: Me in particular, in terms of the writing — if you look at my social media and Cameron’s, I had never put myself out there. I was very nervous about it, and I never wanted to. I think I am, more in that way, like Barbara Gordon, who is not the type of person to do that sort of thing lightly.

TMS: And when she does, she realizes how hard it is.

Fletcher: My fear, when I’m doing it, is that I will get lost in it, and it will take me over and I’ll start taking pictures of myself all the time. I’ll start getting into it too much, and I’ll misrepresent myself. That’s what I think we were trying to get into with Barbara there. She’d been in 34 issues and hadn’t been taking selfies or anything. So she started exploring this as a means to try to manufacture a happy life for herself, and because it caught on as a Batgirl thing, she got lost in it for a moment. And it was part of the tale that we told there — she got lost in it.

Tarr: Her hand was forced, too. Because — [she had to] take a stand with her identity as Batgirl. Someone else was doing it for her.

Fletcher: The digital identity of Barbara Gordon literally became the villain of the first arc. We were very on-the-nose with it. It’s often quite telling when people go off about the selfie stuff being negative that they haven’t actually read the arc. That first image —

TMS: It’s more complicated than that.

Fletcher: Absolutely. It’s about how that is empowering, but at the same time, if you let it take over, it can become a villain in a way. You need to find balance with it. You need to let it be empowering to you, but not release your entire self.

TMS: From an artistic standpoint, I wanted to talk about you incorporated in the ‘likes’ and the way the lay-outs include social media in the story. The digital elements are always in play, with Barbara’s powers and the social media — it’s this very cyberpunk interpretation of the world —

Fletcher: Our co-creator Cameron is reading this right now and bristling at the word “cyberpunk”!

TMS: Aw, I mean it as a compliment!

Fletcher: I’ve said it too! I’ve said, “Dude, we are doing cyberpunk, whether you like it or not!” And he’s like, “Nooo, we’re never going to use that term!”

TMS: I don’t know what else to call —

Fletcher: That’s what we adopted — we adopted a book about a woman who’s only able to walk because of a cybernetic implant. Who is a hacker!

TMS: She’s a cyborg. And then she has to battle her shadow cyber-self! If that’s not cyberpunk …

Fletcher: The social media stuff — that’s stuff that we kind of forced on Babs and she immediately took and ran with it.

Tarr: It’s our lot — it’s how we live our lives. We have these clever ways — the guys didn’t want internal monologue, so we have text messages that inform you, instead of “I’m going to school right now and I’m worried about my paper.” Instead you’re texting your friend, “Oh god, I’m worried about this, blah blah blah.” And they’re like, “it’ll be fine!” You know? It’s a neat way and a modern way to find out what’s going on in someone’s head, an authentic way.

Fletcher: And occasionally we’d get to literally see what’s inside Barbara’s head as she walks through the room, with her photographic memory.

TMS: Right, that’s illustrated in a visual sense, as opposed to having a perhaps Batman-esque interior monologue of observations —

TMS: I also wanted to talk a little about the facial expressions that you tend to give Batgirl — that personality, the humanity of her character?

Tarr: I love that stuff. I eat that up. Brenden writes me scenes so I can do fun things with people’s faces. I come from this manga background, and they nail expressions and humor and slice-of-life stuff — they have all these moments that land and make you feel, and I never read a comic that really made me feel the way that I get out of manga. I’m trying to bring that heart to Batgirl.

Fletcher: Go back to issue 35, and then look at what Babs is doing now. Watch her cutting loose and going, “ahh, I can just do exactly what I want!” The way the expressions now are way more like manga, way more over-the-top, way more expressive — I love them. I want Babs to do more. There’s a lot more sparkles now, as well. She’s really cut loose with the sparkles in the book.

Tarr: Wait ’til you see all the dreamy circle-bubbles that I added in the next issue.

TMS: You’re doing all your own lay-outs now, right?

Tarr: Yeah! I’m still getting some help with my action scenes, because it’s still kind of awkward for me to do, but if they’re just talking or having conversations —

(Images via Comicvine and Newsarama)