Interview: Aisholpan, The Eagle Huntress Herself, on Sharing a Rich Tradition and Being Brave 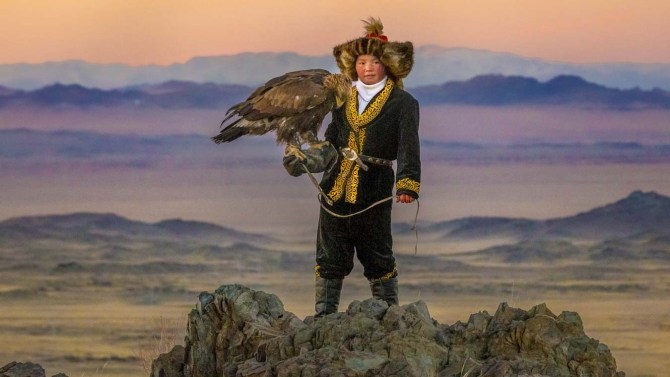 The Eagle Huntress is available now on Blu-ray, DVD and Digital, which means many more will now have to opportunity to see Aisholpan’s captivating journey to becoming an eagle hunter from capturing a young chick to her first hunt. While Aisholpan comes across as very humble in this email interview, the documentary will give you a look at a smart and capable girl who fiercely pursues her goals without hesitation or even complaint.

You can see also check out our conversation with director Otto Bell on how he put this extraordinary story on screen.

TMS (Charline): What is your favorite moment in the documentary?
Aisholpan: Climbing up the mountain to get the chick from the nest and winning the award at Golden Eagle Festival.

TMS: What were your thoughts when you first saw the film? Did those change over time?
Aisholpan: While I was playing for the film, I did not notice anything. First time I saw my film, I could not believe how beautiful the film was.

TMS: What did you think when Otto approached you to document you and your family for this movie? Was there any hesitance?
Aisholpan: We did not have any hesitance. Because this movie will show the world that my people have a rich tradition in this. When we first met with Otto, he looked like a kind person. It was fun to work with him.

TMS: What do you hope that people take away from your story?
Aisholpan: People will learn about Kazakh’s tradition and love between parents and child.

TMS: How did you first get interested in hunting with eagles?
Aisholpan: First time, I was interested by feeding the Eagle petting her. She seemed like such a brave animal. Then I went together with my dad to hunt. It was so much fun to do.

TMS: What did the boys in your life tell you when you expressed interest in hunting?
Aisholpan: There were no boys who were against me … mostly my father’s friends didn’t think a girl could do it. They told me girls cannot hunt with Eagles.

TMS: Can you tell us a little bit about the traditions surrounding eagle hunting in your culture?
Aisholpan: Eagle hunting has a history about 2000 years. It is a Kazakh’s unique tradition that has passed from our ancestors.

TMS: What advice do you have for any women who wants to try something traditionally masculine and might be a little scared to?
Aisholpan: Be brave and keep moving forward no matter what happens.

TMS: Did you get to meet Daisy Ridley? If so, what was that like?
Aisholpan: Meeting with Daisy Ridley was so fun. We had long conversations. We shared our funniest moments. She taught me something that I cannot learn from others! She is a nice person!

TMS: How does it feel to suddenly be such a Hollywood star?
Aisholpan: I have never thought of myself as a star!

TMS: You’ve accomplished some incredible things–is there anything you’re hoping to get done this year?
Aisholpan: To improve my English!

TMS: What do you hope to accomplish in 10 years?
Aisholpan: Finish my university and become a doctor.

TMS: What’s one piece of advice you want to tell your fellow young women?
Aisholpan: Dear girls, you can do anything!