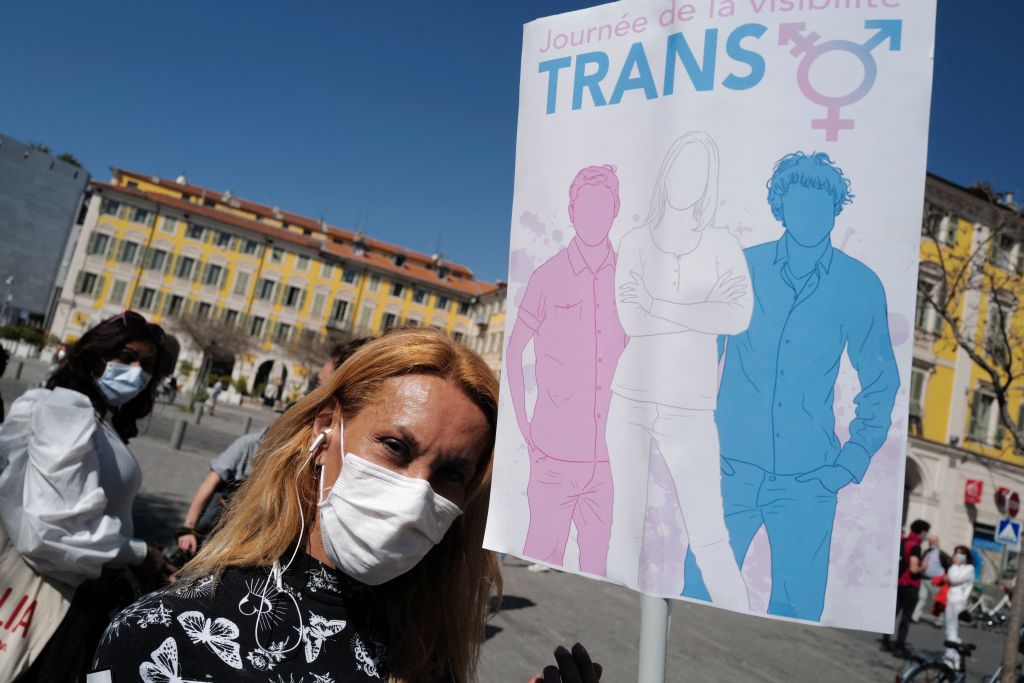 March 31st is International Transgender Day of Visibility, an annual day of awareness that began in 2009 and was sparked by Rachel Crandall-Crocker, a trans woman in Michigan. “I wanted a day that we can celebrate the living, and I wanted a day that all over the world we could be all together,” Crandall-Crocker said of the day’s inspiration. International Transgender Day of Visibility is meant to celebrate transgender and gender nonconforming people, while also working, as GLSEN writes, to further highlight what “still needs to be done to achieve trans justice.”

Today, social media abounds with posts from transgender and gender nonconforming people and allies, often tagged with #transdayofvisibility. Attention to the day should serve as a call to both honor these communities and to push back against transphobia. And this year, President Biden issued the first Presidential proclamation on Trans Day of Visibility. (You can read the proclamation in full from The White House here). It begins:

Today, we honor and celebrate the achievements and resiliency of transgender individuals and communities. Transgender Day of Visibility recognizes the generations of struggle, activism, and courage that have brought our country closer to full equality for transgender and gender non-binary people in the United States and around the world.

Their trailblazing work has given countless transgender individuals the bravery to live openly and authentically. This hard-fought progress is also shaping an increasingly accepting world in which peers at school, teammates and coaches on the playing field, colleagues at work, and allies in every corner of society are standing in support and solidarity with the transgender community.

The proclamation further states, “The crisis of violence against transgender women, especially transgender women of color, is a stain on our Nation’s conscience,” and writes of the necessity of passing the Equality Act, which will “provide long overdue Federal civil rights protections on the basis of sexual orientation and gender identity.”

Biden declares that “Vice President Harris and I affirm that transgender Americans make our Nation more prosperous, vibrant, and strong. I urge my fellow Americans to join us in uplifting the worth and dignity of every transgender person.” New Secretary of Defense Lloyd J. Austin III also tweeted about the updated departmental policy of once again allowing open service and recruitment of transgender people in the military, after the Trump administration’s insidious anti-trans military policies.

This is all a huge and welcome public shift in America’s political leadership from the awful transphobic rhetoric and discriminatory policies of the Trump administration. And it means that Trans Day of Visibility, which originated in a Facebook post from Crandall-Crocker encouraging people to organize their own celebrations, is now officially proclaimed by the U.S. President—as well as present worldwide in gatherings, parades, protests, parties, and in our very landmarks as skyscrapers and monuments are lit up in pink, blue, and white trans pride colors.

But as Ms. magazine points out, despite The White House leadership change, this year’s Trans Day of Visibility arrives at a fraught time in America for transgender and gender nonconforming people:

This year’s Transgender Day of Visibility comes at a particularly trying moment for gender diverse people in the United States. More than 80 anti-trans bills are pending in state legislatures, according to the Human Rights Campaign. Most of those bills would limit trans youth from playing sports and accessing affirming medical care.

The Human Rights Campaign calls out those states that have pending anti-trans legislation:

If you live in:
AL
AR
AZ
CT
FL
GA
IA
IN
KS
KY
MI
MN
MO
MS
MT
NH
ND
OH
OK
SC
SD
TN
TX
WV
Then there has been an anti-trans bill introduced in your state in 2021.
On this #TransDayOfVisibility, let’s uplift each other — but also commit to action. Call your legislators.

We want to showcase some of the important and celebratory posts we saw on Twitter, though there are, wonderfully, so many that any proper article on Trans Day of Visibility’s social media impact would stretch out for miles and miles and miles. It’s especially great to see all the fantastically talented transgender and gender nonconforming artists who are sharing their beautiful work.

You can check out the hashtag #transdayofvisibility on Twitter for many more posts, and the tag is also in use on Facebook, Tumblr, Instagram, TikTok, and more.

Im a Two-Spirit, Cree illustrator! My work is a mixture of Indigenous, queer themes, original characters and redraws! 💕✨ pic.twitter.com/dOGTwK0F97

Trans people are more than just our transness! Get to really know us! #TransDayOfVisibility https://t.co/QT4BM9fmCn

You might recognize me as the “Haha I do that” viner or the “how to make a ____ song” person but my main gig is music.

Might I suggest listening to Transgender Street Legend Vol. 2 today if you’re looking for trans artists?https://t.co/KJu5IG2Fj5

Happy #TransDayOfVisibility to this little button @BrieHubble, her very first TDOV as an out lady! (She came out to me like SIX DAYS after the last one so she basically had to wait a whole year) pic.twitter.com/Zh5wxEO0ym

[repost] happy #TransDayOfVisibility to all my fellow trans people! ily all so much 💕 💕 💕 pic.twitter.com/76eGiigHrC

Hi it’s my first #TransDayOfVisibility out to my spouse and closest friends, pretty cool!! This part of my identity is something I’ve held close and precious to my heart, and I’m fortunate that the people around me have been so supportive and patient. Here’s some art just because pic.twitter.com/dP8wIXyU6B

I tried this overnight & got a bunch of transphobes so I’m trying again. Hello #TransDayOfVisibility I’m Elicia & I like to draw magic realism & I love you 💛 pic.twitter.com/h8sXqrYJBg

HAPPY #TransDayOfVisibility im lee im a transmasc butch lesbian and today i offer you my menagerie of round shapes & colors pic.twitter.com/BJhqnUcOft

For #TransDayOfVisibility, I wrote about all the ways that we police trans anger.

My latest, in @TeenVogue: https://t.co/ElvsSKL7if

I am Emily VanDerWerff, critic at @voxdotcom and co-creator of @ArdenPod. Being visible is the literal least someone can do, but sometimes just seeing the face of someone like me can help people feel seen.

It’s scary, but you can do this. Promise. pic.twitter.com/dkWclpJXc3

Hello, my name is Channing! I’m a Nonbinary jack of all trades and I’m currently directing, producing, and writing the world’s first Isekai Anime Musical @repriseanime! (I am also powerfully hot) #TransDayOfVisibility pic.twitter.com/aUVivNXzSX

Happy #TransDayOfVisibility everyone, I’m transmasc and bigender and still only at the beginning of my journey pic.twitter.com/Ux8mCFfMSy

Happy #TransDayOfVisibility ! I’m Thomas, an italian artist whose work focuses on my experiences as a trans individual #TDOV🏳️‍⚧️ pic.twitter.com/gqEPBPDQ9O

Happy Trans Visibility Day, folks and fiends! For those that aren’t aware, yep, I’m a trans man and just passed my one year on T! (The beard is still uhh, a work in progress, haha)🏳️‍⚧️✨ #TransDayOfVisibility pic.twitter.com/UC3uTgvW2q

There are also lovely and numerous messages from allies (as well as advice as to how to be a better ally), and celebrities, public figures, brands, and politicians joining in to further promote the day.

Transgender and non-binary folks inspire us every day to live our lives authentically. We see you, we hear you, and we will keep fighting to ensure you are treated with dignity, respect, and that America lives up to its promise to you all. #TransDayofVisibility

Transgender and nonbinary individuals have fought tirelessly to make our nation more equitable. On #TransDayOfVisibility, we celebrate their achievements and contributions to our communities, and we remain committed to the fight for equal justice for all. pic.twitter.com/IF0NCPhOjO

#TransDayOfVisibility: Gottmik’s Advice for Being a Better Trans Ally https://t.co/odiDe7mjw5

To mark #TransDayOfVisibility, [email protected] curated a list of resources, including news articles and media to read, watch, and listen to: https://t.co/TQncFzgSLZ.

The Broad stands in solidarity with our transgender and gender non-conforming colleagues today and every day. pic.twitter.com/G5WYvueRP2

Trans rights are human rights. I stand in solidarity with the Trans community. #TransDayOfVisibility

I’m so proud and inspired to see you defying prejudice & ignorance and declaring and living your true selves.

I’m sad and angry when I see the amount of extra work and effort that trans people have to do just to survive and live, much less thrive and accomplish your life goals.

Trans friends & fam: you are seen, cherished, and valid. We’ll continue to fight for equality & the rights you deserve, today & all days. #TransDayOfVisibility

On #TransDayOfVisibility, we reaffirm the simple truth that trans, non-binary, and gender non-conforming Americans should be able to live authentically and with dignity. We commit to staying in the fight so they can be themselves free from hate and discrimination. #TDOV

We must call anti-transgender legislation what it is: hateful & bigoted discrimination. We stand with all transgender people in the ongoing struggle for equity & justice on this #TransDayOfVisibility. Take action & tell the Senate to pass the #EqualityAct: https://t.co/U5N0NhotVo pic.twitter.com/IXYS4Q0DXW

History is happening. Trans rights are human rights, and they are under attack. We must not remain silent. #TransDayOfVisibility https://t.co/CkpApDZmq1

I see my two spirit brothers and sisters. #TransDayOfVisibility pic.twitter.com/rV1DXb2Udg

You belong & you are loved. We’ll keep fighting for a world where you can live freely and authentically, with equal rights and respect. #TransDayOfVisibility

Trans rights are human rights, and on this #TransDayOfVisibility , I’m pleased to announce we’ve updated DoD policy on the open service of transgender individuals. The update reinforces our prior decision to allow recruitment, retention, and care of qualified trans individuals. pic.twitter.com/JJZhtr7uYI

This is wonderful (and informative!). Everyone should read this, especially parents or those planning to be. Thank you @JesseThorn. #TransDayOfVisibility https://t.co/Y93rbZ4mob

Everyone deserves to be who they are, love who they want and live without fear. Trans rights are human rights—this #TransDayOfVisibility and always.

There’s such a dazzling outpouring of posts that you can spend hours scrolling through the hashtags for International Trans Day of Visibility. It’s vital—and wonderful—to see so much positivity and visibility for transgender and gender nonconforming people today, but we must all work toward this being the case every day of the year.

Let’s support and elevate our transgender siblings, not just on #TransDayOfVisibility but every day. pic.twitter.com/IzSA32Cpbg

Here are some other stories that we saw: