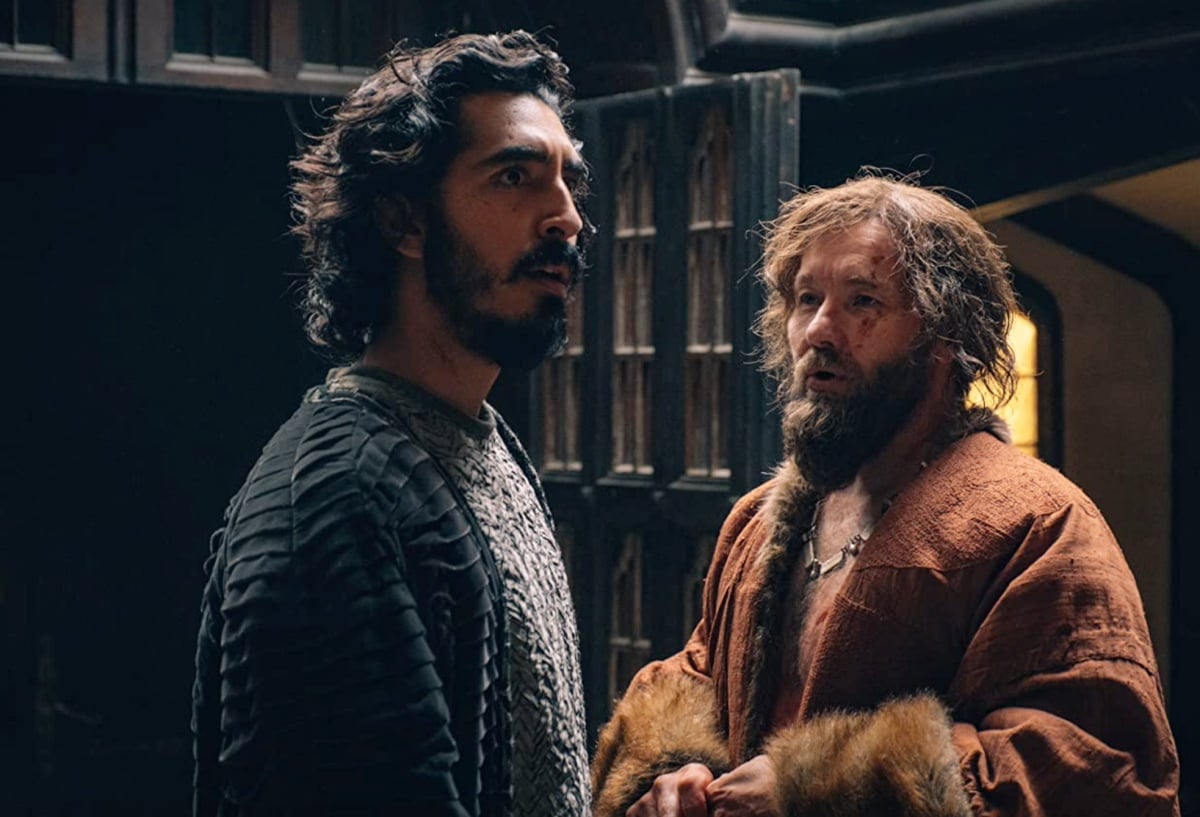 A24’s latest release, The Green Knight, has seen a very split reaction between critics and audiences. Where the film and I have a little bit of an issue is how it chooses to handle some of the homoerotic subtext of the original story in this adaptation.

Based on the Arthurian legend, the movie follows Gawain (Dev Patel) on the journey that made him a legend. The Green Knight begins on Christmas Day, and Gawain, the nephew of King Arthur (Sean Harris), is not acting in ways that befit a knight. He arrives at Camelot, and his uncle asks to hear a tale about something Gawain has done so they can know each other better.

Gawain shamefully admits he has none to tell. Enter the Green Knight. The otherworldly figure challenges the knights to a “game,” where if anyone is able to land a blow on him, they will win his ax, but they must come to the Green Chapel next Christmas and receive an equal blow in return.

Now, you would think with rules like that, you’d just make it a flesh wound, but Gawain takes up the challenge and beheads the knight—who stands up and rides off carrying his decapitated head. Now, the timer is set, and Gawain, whose name is now known across the land, must honor his part of the bargain.

As someone who is familiar with the tale of Sir Gawain and the Green Knight, but also aware of the reviews, I came into The Green Knight with excitement. Not only were we getting a strange, trippy Dev Patel-led version of an Arthurian legend, but a legend that didn’t heavily feature King Arthur. I can see why this film is so divisive. It is beautiful, well-acted, and dripping with dark fantasy elements. A friend of mine called it Sir Gawain and the Seventh Seal that F*cks, and I think that is very apt.

The film is not confusing, but it does ask the audience to fill in a lot of information—especially when it comes to Gawain’s Mother. In this incarnation, he’s the son of Morgan Le Fay and not Arthur’s other older sister, Morgause. In the legend, Le Fay’s motivation for masterminding the entire Green Knight episode is to test King Arthur’s knights and also get some payback against Guinevere. It is left unclear what exactly is prompting her here, and while it is fine to have elements of ambiguity, I can see how some audiences might find it exhausting.

All that said, let’s get into where it fumbles the homoerotic subtext.

Spoilers for The Green Knight.

In both The Green Knight and the epic poem it’s based on, Gawain arrives at the home of a lord and is put up to a test of seduction by his wife. In Sir Gawain, the Lord’s name is Lord Bertilak, and they make a deal. Lord Bertilak will go hunting every day, and he will give Gawain whatever he catches on the condition that Gawain gives him whatever he may gain during the day.

Lady Bertilak arrives in Gawain’s bedroom and tries to seduce him, but Gawain only gives her a single kiss. When the Lord returns, he gives Gawain a deer and in return gets a kiss. This happens two more times. During the third time, the lady offers him a sash that is charmed and will keep him from all physical harm. Gawain accepts it in exchange for three kisses and promises to keep it a secret. Gawain gives Lord Bertilak three kisses and keeps the sash a secret.

This plays out differently in the film.

While there is the seduction element, it is put into one main scene where the Lady manages to get Gawain to … emit, onto her hand. Gawain runs off in horror, and when he meets the Lord on the road to the Green Knight, the Lord has to press the issue and kisses Gawain. Gawain’s reaction is a mixture of confusion and disgust.

I was disappointed in this particular choice. In the original text of this scene, the homoeroticism is played fairly innocently as an extension of the chivalry and courtly love challenge at the core of this entire quest. Gawain himself is the one who initiates the kisses. Instead, we get it transformed so that the Lord character appears in an almost predatory nature—especially since, when he does kiss Gawain, it is from a position of power.

It doesn’t help that because the film cuts the reveals that take place at the end of the original story, you don’t know for sure that the Green Knight and the Lord are the same.

Considering this film does have that element of sex at the forefront, it was disappointing to see the sole kiss between two men be depicted in a way that makes it ominous and also removes all of the compelling narratives around it—especially since the movie was certainly long enough in the tooth to make that work.

I enjoyed The Green Knight, but I definitely would like to hear more about what the director chose to change and adapt—and why.