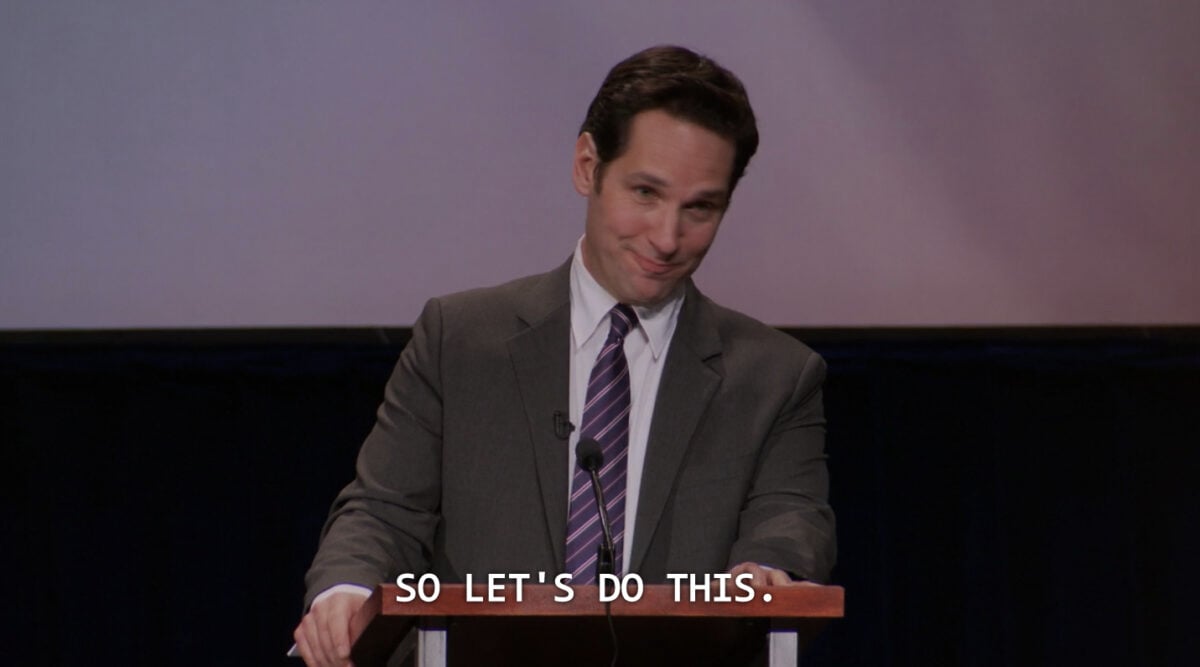 It is pouring rain in New York today. I’m at the Queens/Brooklyn border and it is raining so much that I had to move my charging Switch from my windowsill because it was in danger. All of this is just context to show you how Paul Rudd is a better person than I am. The perpetually youthful Ant-Man star is out in the rain and congratulating voters for waiting out there with him to make sure their votes are counted.

Early voting in New York started last Saturday and since then so many people have participated that there are often hours-long waits in a week of awful rainy autumn weather. Today, to celebrate those waiting out in the rain to vote, Bobby Newport himself walked down the line and handed people cookies for doing their civic duty.

I’m voting in Brooklyn and Paul Rudd is handing out cookies pic.twitter.com/XH4ikButCL

Imagine, if you will, you’re out in the rain in the middle of Brooklyn and all of a sudden Ant-Man walks up to you and is like “Hi, it’s me, Dave from Friends and that hot dad in This is 40. Here’s a cookie for voting!” (This is just what I imagine Paul Rudd would say to people.) You’d be happy you voted, right? Well, let’s just ALL pretend that Paul Rudd is waiting for us at the polls then.

Part of me feels like this is the opening to a new If You Give a Mouse a Cookie series but also, I would probably wait in the rain for JUST the cookie anyway (again, I say this as someone who has already voted. If you haven’t voted, let Paul Rudd giving people cookies inspire you to go do it).

The stories of hours-long lines to vote, while often presented in the media as heartwarming, actually show a much larger problem in our country: Voter suppression. Waiting for many hours to vote in an election you have the right to vote should not be trumpeted as a sign of dedication from the citizens of America. It is a clear indication that our government doesn’t particularly care what the American people want or who they want to vote for. In many places, it’s nearly impossible to safely cast your votes during the pandemic, and in others, the existing bureaucracy just can’t handle high levels of participation—and it was built that way. It’s also a privilege many cannot access to even have that much time during the day to wait it out.

I appreciate people like Paul Rudd because he’s been trying to get people out to vote, educate voters on staying safe, and working hard to be someone fans are proud to support. (I say this as a fan proud to have been supporting Paul Rudd for the last … well … for most my life. Paul Rudd’s career has just always been there for me and my heart.)

So be like Paul Rudd, encourage your friends and family to vote. Make your voices heard even if this system is broken. Do it because it’s what is right and we need to save our democracy.