Five out of five victimized seniors 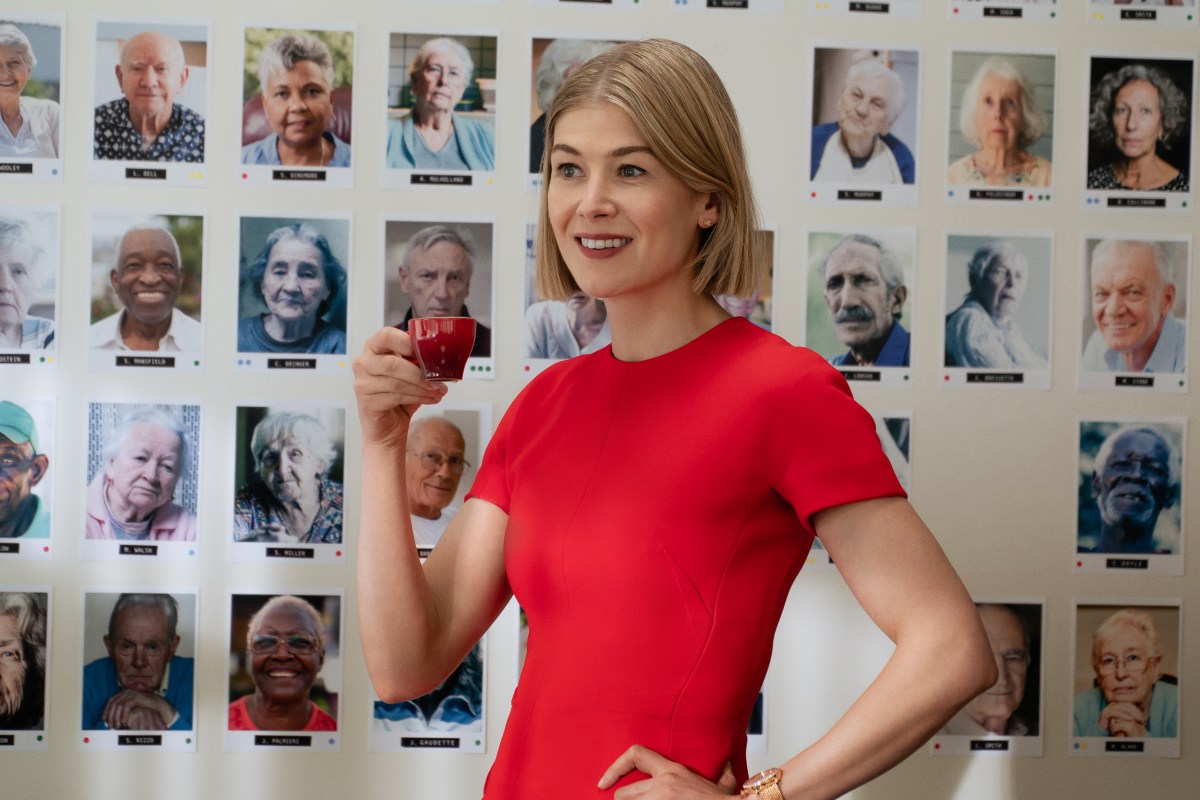 While watching I Care A Lot, Netflix’s latest prestige-y thriller, I kept thinking how the novelty of this film wasn’t just in the dreamy, techno-scored montages or Rosamund Pike’s preternaturally perfect hair, but in how this movie takes what amounts to a horror story and tells it from the point of view of the villain.

Make no mistake—it’s clear from the first moments of I Care A Lot that Pike’s Marla Grayson is a villain, plain and simple. She has no morality whatsoever, aside from her own interest. She’s built a thriving “business” out of victimizing seniors: working with a doctor, she persuades the court to appoint her as a legal guardian for elderly people, and then she proceeds to sell everything they have and enrich herself while her wards languish in a care home. And she does it all with a smile and stylish flare. She’s a monster.

In most movies, the protagonist is someone we are meant to like and root for. It’s a reflex that comes from decades of watching heroes. But in I Care A Lot, we’re not so much rooting for Marla, as holding our breath in horror and hoping for her eventual downfall. It seems that this downfall will come in the form of Jennifer Peterson (Dianne Wiest), a wealthy senior who seems to have no family or friends to look out for her, what Marla and her business partner/girlfriend Fran (Eiza González) call “a cherry.”

The ease with which Marla imprisons and exploits Jennifer is horrifying, mainly because it’s all seemingly legal. But the twist is that Jennifer does have family: her son is a powerful mobster, played with terrifying intensity by Peter Dinklage. And Marla ends up ensnared in a far bigger mess than she can handle as she vies with the mob over Jennifer and tries to find a way for her to win. Because she’s a sociopath and winning is all that matters to her.

Watching Pike as Marla is fascinating. Even though she’s absolutely terrible and deserves every second of suffering she endures, there comes a point in the film when the viewer may feel a grudging admiration for her ruthlessness and how true she is to her twisted deals. We don’t quite want to see her survive, but there is some satisfaction in seeing her turn her wrath on those that may deserve it. Pike is at her chilly and chilling Gone Girl best throughout the entire film, and even when Marla is at her worst, she’s a fascinating delight to watch.

There are human elements to Marla too, mainly in her relationships with other women and in her romance with Fran. Fran and Marla seem to truly love and care for each other, and the queer love story is treated in a refreshingly matter-of-fact way. I don’t think this film falls quite all the way into the killer queer lady trope either since Marla isn’t crazed or murderous, she’s just amoral and greedy.

Marla in her way represents a toxic sort of white, “girl boss” feminism that’s based entirely on power and money. She’s been threatened and insulted by men her whole life it seems, so she feels justified in exploiting and abusing the world for her own ends. That viewpoint is very clearly wrong and vapid, but Marla also thinks she’s a feminist hero because of it.

And that may be why Marla, like any good horror movie monster, is so hard to take down. She’s empowered by something more than herself; an idea and a goal that leaves all others devastated in her wake. Which makes watching her fail and succeed so interesting.

I Care A Lot is currently streaming on Netflix.