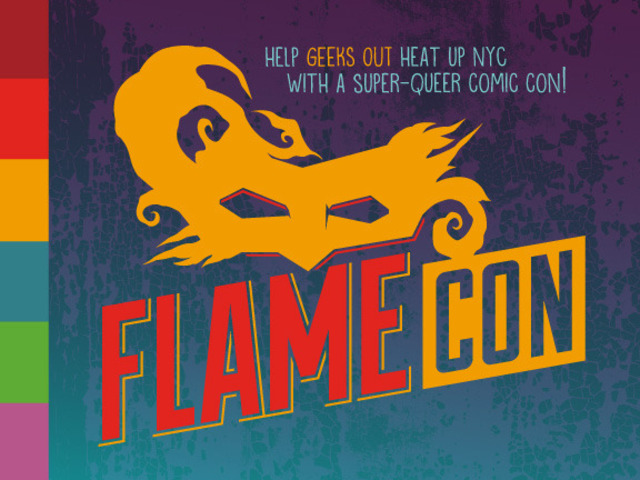 According to Geeks Out’s press release:

With 10 days remaining in its campaign to bring New York City its first-ever LGBTQ comic convention, the Geeks OUT FLAME CON Kickstarter has reached its goal of $15,000, backed by over 320 donations.

Flex goals include a VIP section for backers after $17,000, high-quality video recording of FLAME CON at $19,000, and a special on-site discount for the original anthology comic POWER!, debuting at FLAME CON. Specific date and venue details will be announced shortly.

At FLAME CON, geeks all corners of the LGBTQ community will have a unique opportunity to meet up and geek out over a range of artists, creators, and vendors catering to all kinds of queer interests and tastes. Provocative and intelligent panels will explore ideas and questions not discussed at traditional cons. Other FLAME CON attractions include an on-site art show, an anthology comic, and at the end of the day, a cosplay parade leading the way to a nearby after-party. Everyone will be geeking out in the streets, and celebrating into the night.

Geeks OUT has been organizing incredible events for LGBTQ geeks since 2010, so I’m beyond excited to see what their inaugural con will have in store. Date and venue details will be announced shortly, but in the meantime, it’s not too late to get out there and donate!