Hollywood is Rife With Sexual Harassment, Now What? Some Proposed Solutions and Actions 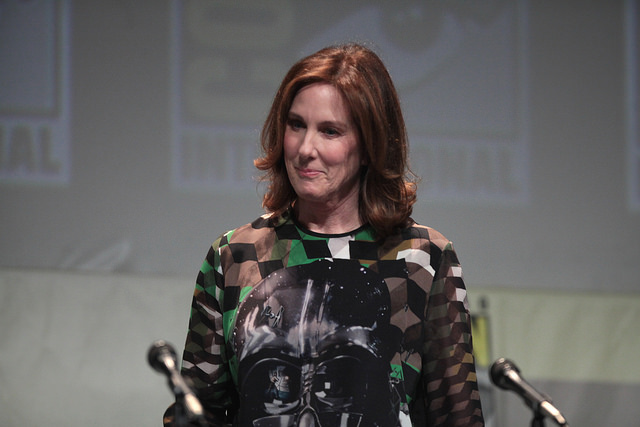 We’ve read the scandalous news stories, the op-eds, and the think-pieces (we’ve even written some). We’ve stood in solidarity with those who’ve told their stories, and we’ve vowed that, despite the fact that Hollywood has been a hostile place toward women basically since its inception, that this time is different. This time, we’re actually going to do something about this. So, what is Hollywood doing?

Dealing With the Immediate Problem of Harassment and Assault

At the same Elle Women in Hollywood event where Reese Witherspoon and Jennifer Lawrence shared their stories of Hollywood abuses, powerhouse producer (and keeper of the Star Wars keys) Kathleen Kennedy proposed action.

According to The Hollywood Reporter, Kennedy’s remarks not only named and condemned Harvey Weinstein, but she also used her time to talk about what she sees as a possible proposed solution. She said, “For the past few days, I’ve been in discussions with friends and colleagues, and I want to use my few moments of speaking tonight to offer a proposal. The organizations that constitute the American film industry — the studios, the unions, the guilds and the talent agencies — should immediately convene a commission charged with the task of developing new, industry-wide protections against sexual harassment and abuse.”

This is necessary because, as she put it, “Predators must come to feel that they can’t count on power or wealth or fame to shield them from the consequences of their actions. But sexual harassment of women and men, predation, rape and the misogyny that is the context for this inhumanity will continue unless there is a decisive, industry-wide, institutional response that legislates change rather than hopes for it to happen.”

What gives me hope in her proposed solution is not only the fact that it would include members of all the organizations that make up the entertainment industry, so that they can cross-pollinate ideas and ensure that they’re all on the same page and on the side of those who report, but also that Kennedy proposes that “The commission should be composed of specialists in labor and management practices, lawyers and legal scholars, sociologists, psychologists, feminist activists and theorists, as well as people who work in film and television.”

I’m glad that it isn’t just the voices of those within the entertainment industry that will be heard, but also objective voices from outside the industry that can provide perspective, insight, and solutions that might not occur to them otherwise. I really hope something like this is formed, and that Kennedy remains active in it. We need the women of the Hollywood establishment to step up and lead this fight from their positions of power.

Combatting the Systemic Sexism and Injustice Through Increased Opportunity.

Director, writer, and actor Cathryn Michon wrote an open letter in The Huffington Post to Bob Weinstein, the other Weinstein of The Weinstein Company and Harvey’s brother, giving him what might basically be the only way he can “save [his] soul and your company.”

Michon proposes that TWC, from now on, exclusively hire female directors “for every film, TV or web project you make.” She explains:

“Part of why your brother was so successful at being such a monster is because the power structure in this town is extremely patriarchal. Nowhere is this more evident than in the most powerful job in town, that of directing, where women only helm 7 percent of feature films.

Creating an entire company where overnight the power structure has changed would both cleanse your soul and make you a lot of money.

It’s both your reparation and your key to profit.”

She then goes into the facts and figures that are readily available, but often just as readily ignored, about how women actually do make money at the box office. My only qualm with her letter is that she emphasizes the fact that TWC may have to take chances on “untested” female directors the way the Weinsteins once took chances on untested directors like Quentin Tarantino and Kevin Smith. This is true. However, equally true is that there are plenty of experienced, mid-career female directors who’ve just…stopped getting hired as male colleagues leapfrog over them. Hire those women first and perhaps we’ll be onto something.

Then again, Bob Weinstein is allegedly the “nice guy” version of his brother as far as sexual harassment and sexism go. When will men learn that “persistence” in going after women is just a nice way of saying “stalking,” and that once you get turned down, you should move on with your life, and leave it to the woman to circle back if she decides she’s changed her mind? All of this contributes to a culture that allows these abuses to exist.

But TWC isn’t the only company that can or should do this. Any company can decide to only hire female directors for the foreseeable future. And for those who would rush to cry “reverse sexism,” think about the fact that most production companies and studios have been hiring nothing but male directors year in and year out for as long as Hollywood has existed. Just because it’s not “official policy” doesn’t mean it’s not real. If you didn’t speak out about inequality for all that time, I’ll kindly ask you to shut your yapper if one or two companies decide to make this a mandate.

In this vein, there are also groups like Women in Media, Cinefemme, Seed & Spark, The Directors List, and others that prioritize getting women work and getting inclusive stories told. The only way men won’t hold most of the power in Hollywood is if women are making an equal share of the decisions and helming an equal number of the projects being made.

As women in Hollywood attempt to enact solutions that will lead to systemic change, the one weapon they already have begun to wield is their voices. The days of being too afraid to say something for fear of reprisal are over. Well, if not quite over, then women are learning how to better navigate the risks so that they can speak up.

In addition to speaking up individually, they’re also speaking up collectively. Will you be in the L.A. area in November? If so, join The Feminist Majority Foundation in conjunction with Civican and We For She in marching to Take Back the Workplace on November 12th!

Obviously, there are more workplaces than just Hollywood. We cover that, because we’re a pop culture site, but women obviously deal with sexual harassment and assault everywhere. What solutions have you seen in your workplaces, whatever they may be? How are you taking concrete action toward change? We’d love to hear about it!