Civilian Hillary with no f-cks left is my favorite Hillary. 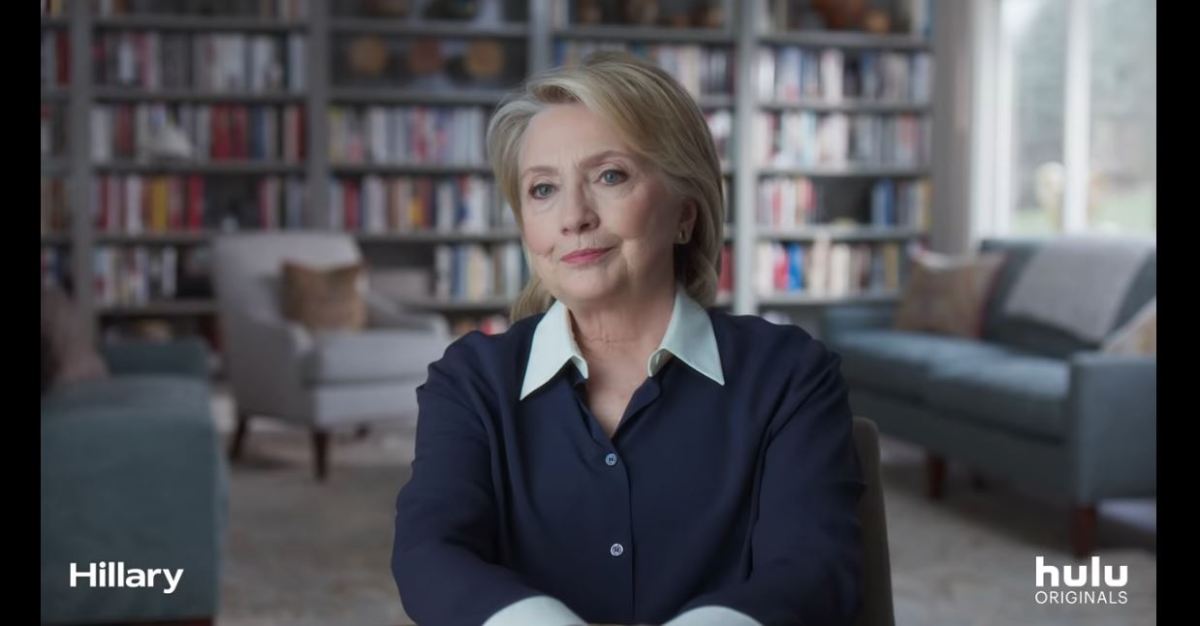 Hillary Clinton has kept busy since her devastating loss in the 2016 presidential race. Loss, of course, despite the fact that she won the popular vote by 3 million votes. Devastating not only for her, but for our country and everyone in it. But the indefatigable Clinton couldn’t stay down for long. In the past three years, she has written books, she has traveled the world, and now she stars in a four-part documentary series on Hulu, Hillary, where she gives the crew unprecedented access to her personal life.

With the documentary set to premiere at the Sundance Film Festival, Clinton has been making the rounds to promote the series. Now that she is no longer a public servant or a candidate, Clinton has been giving a series of refreshingly frank and open interviews. She offers her candid take on 2020 and Bernie Sanders in the documentary, per an interview with The Hollywood Reporter, where she said, “He was in Congress for years. He had one senator support him. Nobody likes him, nobody wants to work with him, he got nothing done. He was a career politician. It’s all just baloney and I feel so bad that people got sucked into it.”

When asked if she would endorse and campaign for Sanders, Clinton said,

“I’m not going to go there yet. We’re still in a very vigorous primary season. I will say, however, that it’s not only him, it’s the culture around him. It’s his leadership team. It’s his prominent supporters. It’s his online Bernie Bros and their relentless attacks on lots of his competitors, particularly the women. And I really hope people are paying attention to that because it should be worrisome that he has permitted this culture — not only permitted, [he] seems to really be very much supporting it. And I don’t think we want to go down that road again where you campaign by insult and attack and maybe you try to get some distance from it, but you either don’t know what your campaign and supporters are doing or you’re just giving them a wink and you want them to go after Kamala [Harris] or after Elizabeth [Warren]. I think that that’s a pattern that people should take into account when they make their decisions.

This is maybe the first time we’ve seen Hillary talk so openly about the effect Sanders had on her campaign, as well as the toxic fan culture he inspires. A culture that is well known not only to Hillary, but to her supporters, who were viciously trolled by Bernie bros. Looking back on the 2016 election, it is disturbing to see the same patterns of misogyny replaying in the 2020 democratic primary.

Clinton also addresses the recent Sanders/Warren skirmish over whether or not a woman can be president, remarking “I think that both the press and the public have to really hold everybody running accountable for what they say and what their campaign says and does. That’s particularly true with what’s going on right now with the Bernie campaign having gone after Elizabeth with a very personal attack on her.”

It’s especially telling since 4 years ago, Bernie’s cult claimed they would support Warren in a hypothetical election. Now that she is running and is serious competition however, the knives are once again out. Clinton calls out the pattern of misogyny in Sanders’ rhetoric, saying, “If it were a one-off, you might say, ‘OK, fine.’ But he said I was unqualified. I had a lot more experience than he did, and got a lot more done than he had, but that was his attack on me. I just think people need to pay attention because we want, hopefully, to elect a president who’s going to try to bring us together, and not either turn a blind eye, or actually reward the kind of insulting, attacking, demeaning, degrading behavior that we’ve seen from this current administration.”

It’s so predictable and dispiriting to be in yet another election cycle that seems to have learned nothing from 2016. But it is refreshing to see Hillary calling it out. She will of course be excoriated by Bernie bros, who will likely go after her yet again. For that matter, they will go after anyone reporting what she said. RIP my mentions.

The documentary, which is directed by Nanette Burstein (The Kid Stays in The Picture), promises to be a fascinating and in-depth look at the most polarizing political figure of our time. The series premieres on Hulu March 6.