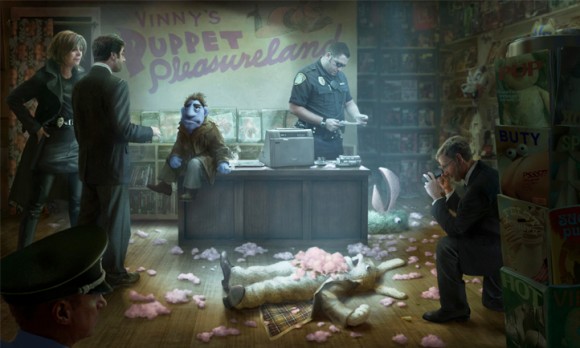 While the Muppets now belong to Disney, The Jim Henson Company is still working on its own projects, and to prove it, they’ve released concept art from a new project called The Happytime Murders. From the looks of it, it looks like a cross between Who Framed Roger Rabbit and Peter Jackson‘s Meet the Feebles, but probably with slightly less, um, we’ll call it “adult content.” The R-rated film, said to be a comedy, is still in the early stages of production, but one name floating around to play one of the non-puppet roles is Katherine Heigl. Hmm. So, someone finally stopped her from making stupid, stupid romantic comedies! That’s good to hear. 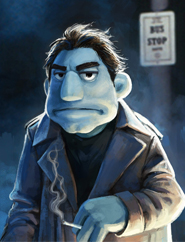 The Heigl news came out in early February, and at that point, she was still only “in final negotiations” and not officially confirmed to join the cast. Cameron Diaz had been offered the role back in 2010, but turned it down.

But now, at least we’re getting a better idea of what Brian Henson, who is directing The Happytime Murders, has been planning. For one thing, we have an official synopsis now from film distributor IM Global:

In a world where puppets co-exist with humans as second class citizens, puppet private eye and disgraced ex-cop, Phil Phillips, is hot on the trail of the serial killer who murdered his brother and is now targeting the cast members of the famous 80s television show, “The Happytime Gang.” As the killings continue, Phil’s former flame, Jenny, is next on the list. It’s up to Phil and his ex-partner, Detective Edwards, to find the culprit, but as bad blood and old resentments resurface the clues start pointing to the only viable suspect, Phil himself. Now he’s on the run with only his wits and hardheaded determination, as he tries to solve, “The Happytime Murders.”

The script is being penned by Kung Fu Panda scribe Todd Berger. It was first announced back in 2008, and is a spinoff of Puppet Up!, a live puppet show from The Jim Henson Company that was “not intended for our young viewers.” Brian Henson mentioned last year that they were shooting for a production start this spring, and it looks like it’s slowly making its way through the early stages.

Here is my take, as someone who enjoys Muppet-style puppet shows that include cursing and murder: I’m psyched. I’m very psyched, especially because it sounds so much like Roger Rabbit. Even if it has Katherine Heigl in it — who has done great things, like Knocked Up — I will be seeing this, enthusiastically. While I wouldn’t expect something from the Henson crew to produce something quite as depraved as Meet the Feebles, I think this looks like a potentially great happy medium between that and Roger Rabbit, and with hints of the Muppet brand of humor, which has always been smart enough to appeal to people of all ages, this could be truly wicked.

I’m into it. What do you guys think?

(via The Disney Blog, additional information via the Henson Alternative Wiki)