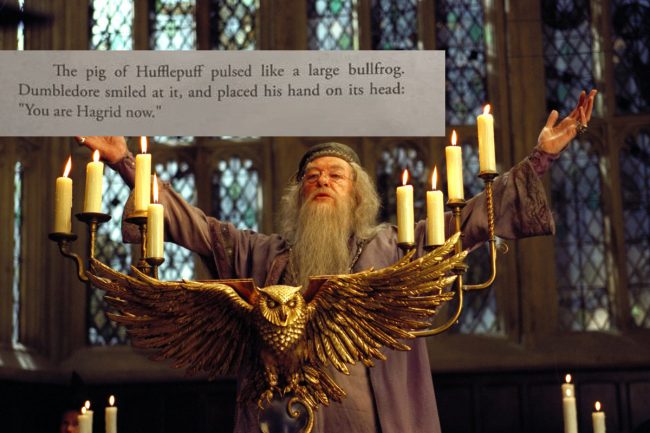 There’s a new Harry Potter chapter out, but it’s not one of those supplementary bits you’ll find on Pottermore. In fact, it isn’t by J.K. Rowling at all. It’s the result of an artificial intelligence algorithm that was fed all the original novels and then produced four pages titled ‘The Handsome One’ for Harry Potter and the Portrait of What Looked Like a Large Pile of Ash.

The AI was made by Botnik, an augmented content creation community of writers, artists and developers who want to “create strange new things”. After the AI provided the words, a number of writers including Jamie Brew of The Onion and Clickhole, intervened to make it more grammatically correct and readable. You can read the whole thing here. Gems include:

“‘If you two can’t clump happily, I’m going to get aggressive,’ confessed the reasonable Hermoine.”

“To Harry, Ron was a loud, slow, and soft bird. Harry did not like to think about birds.”

“Ron was going to be spiders. He just was.”

“The first Death Eater confidently leaned forward to plant a kiss on his cheek.”

“The tall Death Eater was wearing a shirt that said ‘Hermoine Has Forgotten How to Dance,‘ so Hermoine dipped his face in mud.”

“The pig of Hufflepuff pulsed like a large bullfrog. Dumbledore smiled at it, and placed his hand on its head: ‘You are Hagrid now.'”

What are you favorite parts of Harry Potter and the Portrait of What Looked Like a Large Pile of Ash?