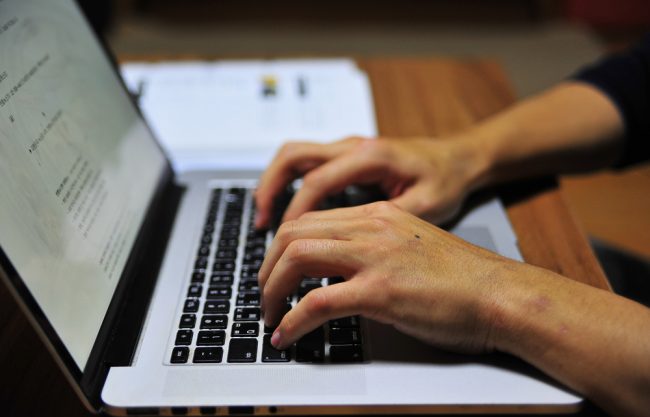 For as long as women have existed in male-dominated spaces and professions (read: for literally ever), there have been whisper networks among them, warning each other of specific men and even entire companies to avoid. But a few months ago, in the fall of 2017 (which coincided with the fall of Harvey Weinstein and many other prominent men), an actual list started making the rounds among women working in media–a link-protected spreadsheet of men with reputations for being predators in their industry.

It didn’t take long for the list to be weaponized, with ultra-right-wing conspiracy theorist Mike Cernovich offering a $10,000 reward for anyone who could provide him with a copy and subsequently publishing the names of two men listed who just happened to be Cernovich’s known personal enemies. The list was quickly taken down but still made its way to Reddit and Twitter.

There’s now a rumor going around the internet, substantiated by several reportedly reliable sources, that Harper’s Magazine plans to run a story about the list in their next issue, in which they will out the name of the woman who created it. Word is, it will be their cover story.

It’s come to my attention that a legacy print magazine is planning to publish a piece “outing” the woman who started the Shitty Media Men list. All I can say is: don’t. The risk of doxxing is high. It’s not the right thing to do.

When the list was first compiled, there was much discussion, and much condemnation, regarding its validity and its potential problems. It’s not that there’s nothing to criticize regarding such a list of allegations being made semi-public. But whether you feel the woman or women behind the list deserve to be criticized or showered with praise, it’s irresponsible and totally dangerous for a publication to “out” her.

The woman would be subject to doxxing, threats, etc. If media wants to take sexual harassment seriously, they can start by not endangering the welfare of women.

Nicole Cliffe, co-founder of the forever-missed The Toast, named the publication as Harper’s, along with a plea for the article to be pulled.

You do not have to think the list was a good idea to think this would be a tremendously fucked-up thing to do to a whistleblower.

There’s some discussion now as to whether a “social media outcry” will only push Harper’s to continue with their piece, to avoid appearing to kowtow to censorship. But since that was already their intention, I’m not sure seeing people publicly voice their disappointment can really be a negative.

On top of that, there are other ways to show dissent for those who find the magazine’s plan distasteful and dangerous. Cancelling subscriptions is always a useful tool, of course. (Assuming you have an existing subscription.) Even without a subscription, you can still force the magazine to listen to you.

Cliffe also made an offer to reimburse writers for pitches they might have out to Harper’s, allowing them to take a stand against the story, whether it be personal or public.

My unconfirmed intel on this is that it’s Harper’s but I would sure welcome a denial by Harper’s or, if it’s true, a decision to reconsider before the women of media never ever ever write for Harper’s again.

If you have a piece in the hopper over at @Harpers, ask your editor if the Roiphe piece is happening. If it is, I will pay you cash for what you’d lose by yanking it. My email is nicole dot cliffe at gmail.

If you want to yank quietly bc THIS FUCKIN INDUSTRY I will never reveal our transaction took place.

Others, including Brianna Wu, have offered to split that cost with Cliffe, but Cliffe says “it will be less messy to keep this single-source-single-payer” and instead suggests making donations to RAINN “or the advocacy group of your choice we can help writers AND people who don’t have that venue.”

In addition to offering to pay writers for pulling pieces, other sites have offered to buy those articles as well. Because women’s careers and their increased exposure shouldn’t have to take a hit because of the awful decisions of others.

I'll make the same offer AND run it over at @damemagazine

Bring them to me https://t.co/ssAryRZpwt

Harper’s has yet to comment on the article, other than to confirm that Katie Roiphe–who once wrote about the exaggeration and manufacturing of the date rape crisis–does have a piece in their March issue. If they comment further, I’ll update here.

Update: 1/10/2018: In a statement to the New York Times (and, it appears, in an identical statement to The Atlantic), Roiphe has addressed the “uproar” to some degree, saying “I am looking forward to talking about what is actually in the piece when it actually comes out. I am not ‘outing’ anyone. I have to say it’s a little disturbing that anyone besides Trump views Twitter as a reliable news source.”

I don’t want to get too deep into commentary here, but that’s just insultingly dismissive. Twitter has many, many faults, but it still remains a platform that allows voices to be amplified. It allows women to communicate and share stories in a way that works towards the abolishing of the whisper networks discussed in this article. It played a role in the viral nature of the #MeToo movement. It most likely played a role in the creation of the Shitty Media Men list. It also gives freelancers a unique source of community and allowed so many women to speak out against this rumored doxxing that Cliffe has reportedly paid out $19,000 to those writers.

In regard to whether there actually was a doxxing planned, it sure sounds like it. It also sounds like Roiphe is trying to blame her fact-checker. From the NYT:

An email exchange obtained by The New York Times shows that, during the editing process, a Harper’s fact checker contacted a person said to be a creator of the list and said the article identified her as someone “widely believed” to be one of the people behind it.

Harper’s said that the fact-checking email exchange did not mean the name was ever meant to be included in the final version. “Fact-checking is part of reporting,” Ms. Melucci said.

Ms. Roiphe added, “I would not have mentioned it without her approval. I want to be clear on that.”

So let’s make sure we’ve got this straight. There was a “rumor” on Twitter that Roiphe had the name of the woman who created the list and was fact-checking that she was correct. She may or may not have ever had that name, but people were rightfully upset at the idea that it might make its way into print. Rather than address the claim directly, Roiphe cited “Twitter hysteria.” So sure, maybe Roiphe was never going to publish the name and it really did all come down to fact-checking a fact that was never meant to be published.

Or maybe that “hysteria” was actually just a whole bunch of people in and out of her industry, telling her the behavior she was suspected of was downright unethical and she had to find a way to change course while saving face.