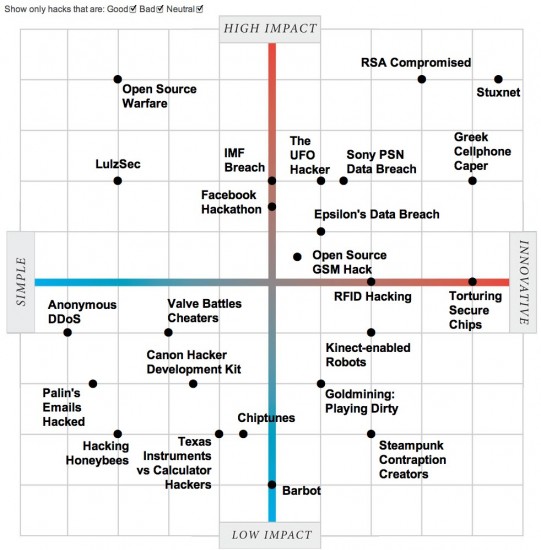 Hacking is one of those words that’s hard to pin down. Depending on who you talk to, it can mean vastly different things, but for the most part it means “terrifying and malicious invasion of privacy” to most, especially after the waves of extremely public attacks we’ve seen in the past couple of months. Of course, thats not the whole story. If it was, you’d probably be cowering in fear of the Facebook Hackathon right now. Over at IEEE Spectrum, they whipped up this neat little matrix to try and put the wide variety of things colloquially known as “hacks” within context of each other.

The matrix rates a variety of hacks, some of which you’ve heard of, and a bunch you probably haven’t, on their relative impact, of which you are probably aware, and their relative complexity, of which you probably aren’t. As if that weren’t enough, hop over to their site to play with the interactive version featuring check boxes to show only “good,” “bad“ or “neutral” hacks. Bad and not-bad is a pretty clear distinction, but it’s interesting to see where someone else draws that blurry grey line between good and neutral, and then get angry when you don’t agree. Good, bad or neutral, we are talking about the internet after all.