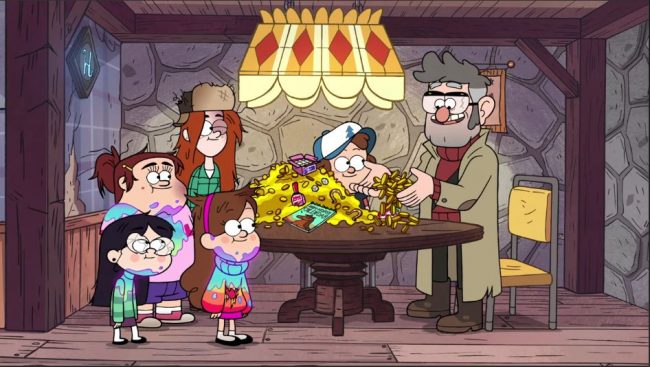 After being visited by Bill in a dream, Ford begins looking for ways to protect the Pines family from Bill’s influence. Mabel goes on a quest to retrieve unicorn hair that will help them form a protective barrier around the Shack, while Dipper and Ford try encrypting their thoughts. In the process, Dipper learns about Ford’s history with Bill, and Mabel learns that unicorns are assholes.

It was an easy thing to forget while the show was airing, as the fandom pounced on any new shred of information about Bill, but this is probably one of season 2’s strongest episodes overall. Both its A and B plots provide strong character progression, and it’s the show’s shining moment as far as really delving into themes around portrayals of women (its overall strengths leaning much more to explorations of family and toxic masculinity). Using unicorns as an entry point to tear down impossible standards of feminine purity is brilliant, and the resulting knockdown, drag-out brawl is extremely satisfying. It also helps finalize the transition of Wendy’s role in the show from “crush object” to “asskicking older sibling” by letting her have an active adventure plot that doesn’t involve Dipper in any way.

This is an important episode in beginning to undermine Ford in the viewer’s mind, even if Dipper is still completely starry-eyed. This is the first time the Journal isn’t just lacking in information–the data it gives on unicorns is just out-and-out wrong. It’s part of the show’s ongoing theme of growing up, in this case hitting on the idea that trusted sources won’t always be reliable, and the younger generations are destined to outstrip them; the fact that this discovery winds up being Mabel’s also makes it resonate more strongly with the idea that past sources of authoritative knowledge aren’t usually very inclusive of other viewpoints  (see: Ford’s idea that “pure of heart”=”stereotypical princess”).

The reveal of Ford’s workspace through Dipper’s eyes is also effectively eerie, particularly in its use of sickly yellows and greens. Hirsch wrote this episode on his own, and it shows. So many of the beats feel honed to precision, from young Ford’s intellectual seduction (a section which manages to feel like it’s told a lot despite only taking about two minutes) to the small moment of bonding between Mabel and Ford (which I will always wish there had been more of). 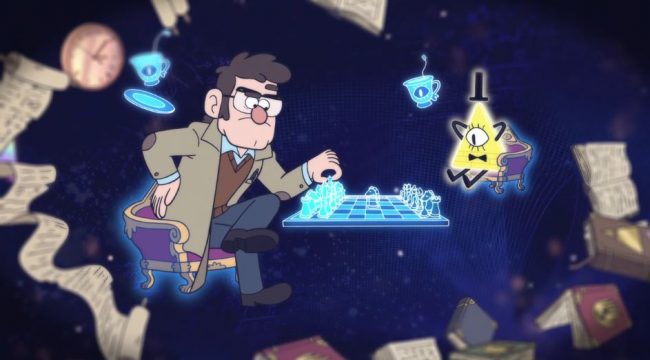 Easily one of the grandest events of season two was the Bill Cipher AMA. It actually took place somewhat before this episode aired, during the long hiatus between “Not What He Seems” and “A Tale of Two Stans,” but it felt most appropriate to bring it up here. Hirsch really went all out on the event, staging a “takeover” of his Twitter that left encrypted clues of when and where the event would be held, then hosting it completely in character. Extra weight was given to question askers who posted audio of them screaming, defaced dollar bills, or took pictures of themselves in tinfoil hats (by far the cutest case of this was a mom who’d stayed up to attend since her kid had school the next day).

Fortunately, the entire AMA still exists for anyone who wants to revisit the fun, but it really was something to experience firsthand. Hirsch was clearly having a grand time with a mix of in-character trolling, dropping hints in line with the show’s “some mysteries will never be answered” ethos, and offering a few genuine bits of foreshadowing (i.e. when asked about Stan he replied, “which one,” and in another post referenced the two season long Eerie, Indiana before the end of the show’s run was announced). Fans were also hard at work decoding offhand references to the novel Flatland and real-world military projects like MK-Ultra.

If I had to pick personal favorites, though, I’d definitely side with Bill’s fondness for margaritas–which fandom, being fandom, immediately turned into a spate of “Bill is a lush” jokes–and the revelation that Bill’s home dimension has thousands of genders, thus rendering the concept very confusing to him. 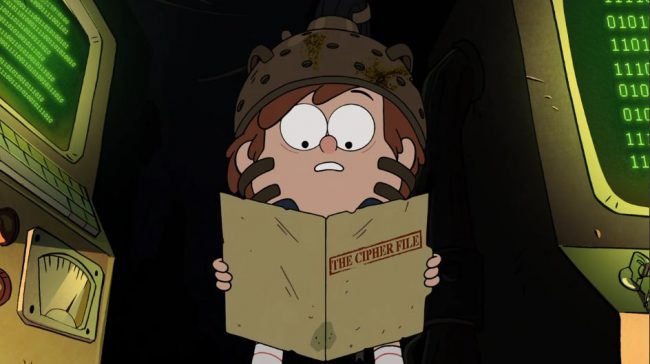 CREDITS CIPHER: A Simple Man With Eager Ears May Trust The Whispers That He Hears (KEY: Schmendrick)

PAGE CIPHER: In Cipher’s Game He Needs A Pawn, Be Sure To Know Which Side You’re On.

Since this is a Bill episode, there’s also a TON of background writing and information. The most important is written in the cave where Ford discovers mentions of Bill, written in symbols (Ford’s chalkboards also contain various hints as to how to decode the symbols):

“It started with bad dreams which became nightmares. I was foolish, I wanted answers, I painted the symbols, I said the words: when Gravity Falls and the earth becomes sky fear the beast with just one eye.”

There are also some neat easter eggs in the text displayed while Ford and Dipper are wearing the helmets. They’re too lengthy to list here, but have been helpfully transcribed by the Gravity Falls Wiki. 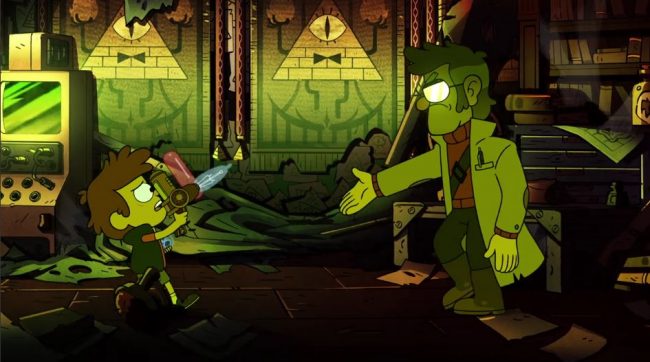 Wondering about the mention of Dimension 52 in Ford’s thoughts? It’s actually a pretty short story. He met a mystical oracle there who installed the plate in his head, then the two of them partied hard on time sand and Ford woke up somewhere else entirely. Which is perfectly like Ford, really. He knows next to nothing about the place (he stayed in one cave for pretty much the entire time), but he had a good experience there so it’s become this kind of nostalgic ideal in his mind.

Journal 3 also offers some retroactive reasoning for Ford’s initial dickishness right after coming out of the portal: it seems he was mid-Final Battle with Bill as the portal opened, and he went through to keep Bill from using it. Yeah, alright, he gets a pass on that one. Doubling down afterward is all on him, though. One of the entries even drops the word “hubris” so I don’t have to.

Ford can be upset with Stan all he wants, but he’s still the guy who almost doomed the multiverse because his own shame about his past mistakes kept him from sharing relevant information with the family. And then he goes on to only share it with Dipper, the 12-year-old child. These are not great adulting skills. Who let this man be in charge of children??

Vrai is a queer author and pop culture blogger; they’re still a fan of that garbage triangle. You can read more essays and find out about their fiction at Fashionable Tinfoil Accessories, listen to them podcasting on Soundcloud, support their work via Patreon or PayPal, or remind them of the existence of Tweets.