“Don’t be evil” is Our Great Overlord and Master Google’s unofficial motto, but there’s one area where they’re having trouble keeping to that: Staff diversity. According to data just released by Google itself, the web behemoth’s staff of just under 50,000 is whiter and more male than the Republican National Convention.

How white and male are we talking here? Only 30% of Google’s global workforce is female, with the number plummeting to 21% for leadership positions and 17% for tech jobs. 60% of the overall workforce is white and 30% is Asian, with black and Hispanic employees, the “other” category, and “Googlers who identify with more than one race” taking up the other 10% For my chart fans: 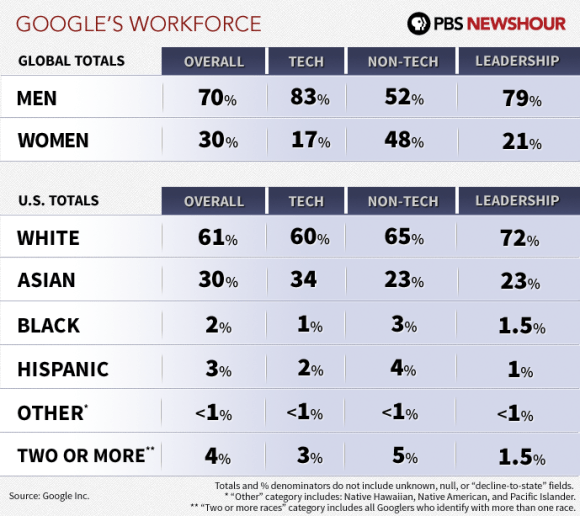 In a post for NewsHour, Vivek Wadhwa breaks down how the tech industry, and Google specifically, has no excuses for its gender imbalance, citing how “about a quarter of today’s pool of highly experienced software developers is female, and a company such as Google—which has its pick of the crop of new graduates as well as experienced engineers—should have far greater diversity.” One of the reasons it doesn’t is that “people tend to hire those who are similar to them,” and in Silicon Valley “the interviewers for technology jobs are usually young men, and… the job specifications are geared towards finding young nerds. The hiring process is like recruitment into a fraternity.”

And just in case you still feel tempted to cry “But there’s absolutely nothing wrong with Google’s numbers! They must just be hiring the best people for the job! Feminazis!,” know that Google itself disagrees with you, so nanny nanny boo boo. “We’re not where we want to be when it comes to diversity,” said their senior vice president of “people operations” Laszlo Bock in a statement to NewsHour:

“It is hard to address these kinds of challenges if you’re not prepared to discuss them openly, and with the facts. All our diversity efforts, including going public with these numbers, are designed to ensure Google recruits and retain many more women and minorities in the future.”

Silicon Valley has in the past been infamously reticent to share its diversity data, with many companies, including Google, citing the “competitive harm” of releasing said data as the reason for their secrecy. That the staff of Google, particularly its tech workforce, is so overwhelmingly white and male—as if white men are somehow inherently better suited to work for Google than women and racial minorities, as if the women and racial minorities just aren’t there to hire— is obviously disappointing, but that Google is at least acknowledging it is a step in the right direction. Forgive me for not patting them on the back, though, at least until they take concrete steps to fix their hiring practices.