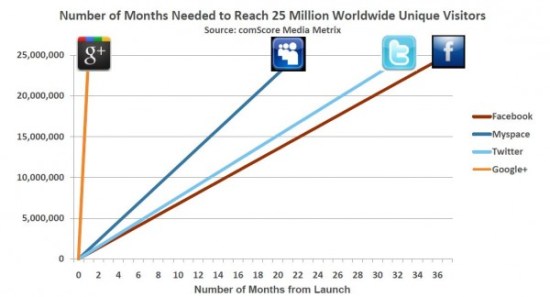 Remember when Google+ was coming up on, and subsequently hit 10 million accounts and everyone was talking about how Google+ was growing with speeds that blew other social networks out of the water? Spoiler: That’s all still happening. Google+ just recently hit 25 million unique visitors, and guess what, it got there much faster than any other social network ever has.

A few things do seem to have changed from the last time around. A lot of new traffic is coming in from outside the U.S., particularly India, and a lot of the new traffic is also coming from the ladies. Google+ is getting to be less of a brodeo considering that women now own 37% of accounts (in the U.S.) up from an estimated 13% (admittedly one of the lower estimates) in mid-July.

Google+ just keeps on trucking, making record-breaking boring. It’s worth noting that Google+ has hit 25 million unique visitors, but apparently not 25 million accounts, or we’d be hearing about that instead. Still, expect that to happen in the coming weeks and expect to hear about how it happened at record speed.