Google gave everyone fair warning, and earlier today the search giant did it.  Google.cn, the Chinese portal of Google.com, now redirects to the entirely uncensored search engine Google.com.hk, the Google of Hong Kong.

From the Google Blog:

In terms of Google’s wider business operations, we intend to continue R&D work in China and also to maintain a sales presence there, though the size of the sales team will obviously be partially dependent on the ability of mainland Chinese users to access Google.com.hk. 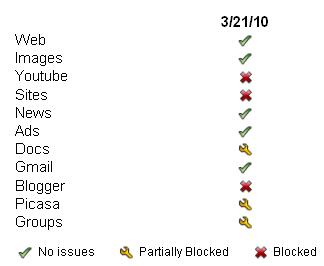 However, according to the Google Operating System Blog (unofficial):

It’s obvious that Google Hong Kong will be blocked in China and this workaround is only temporary.

In the meantime, Google has set up a chart so that users can check on the availability of any Chinese app, from Picasa to Gmail to Google Ads at any time.