Godzilla vs. Kong Had Me Thinking About Property Damage

Godzilla vs. Kong Had Me Thinking About Property Damage Costs Because I’m Old, Apparently

Does Monarch pay for repairs and damages? 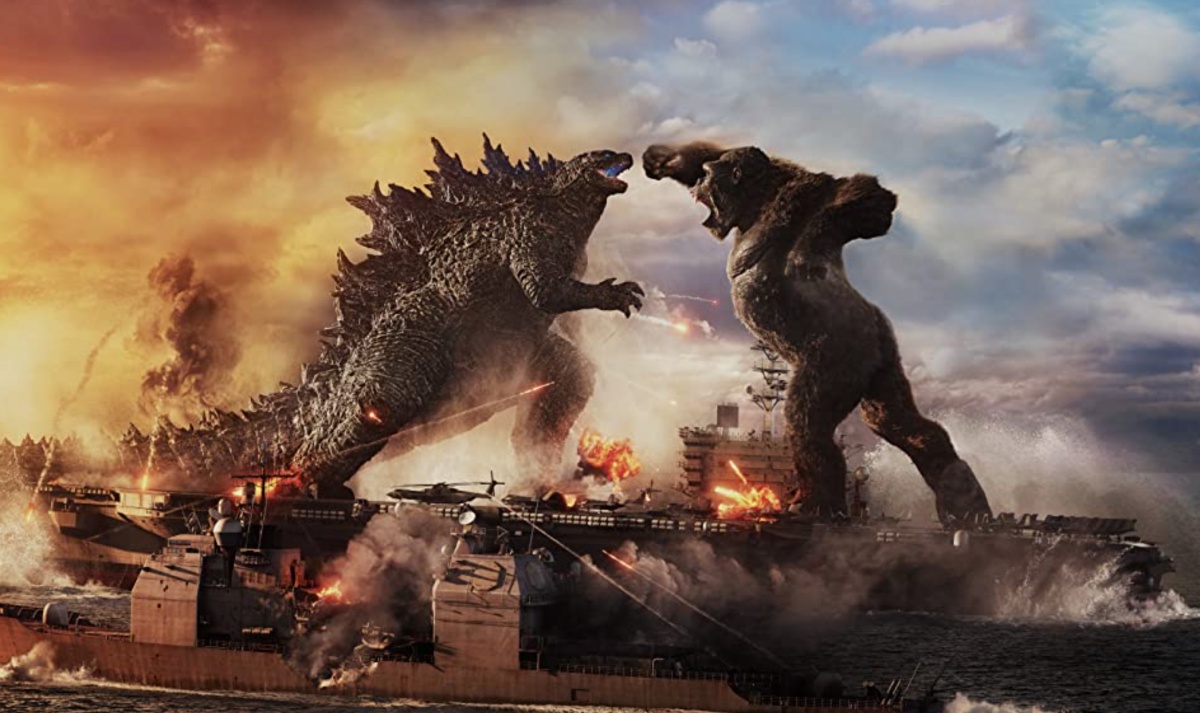 While watching Godzilla vs. Kong I couldn’t help but think one thing—and no, it wasn’t that Mothra shouldn’t have made a guest return cuz reasons. It was property damage. Maybe it’s a sign that I’m getting old, but the matter still stands. Who pays for the damages done by titans of Earth? Does Monarch cover things? Do governments have a special titans disaster relief fund they’ve all been donating to?

Or maybe Apex Industries, after finding out that they were the ones who built Mechagodzilla, are the ones who have to pay for all damages done by the titans on the ship fleet and in Hong Kong? That’s the only logical explanation in the midst of a fictional movie about titans who take their problems out on each other at human expense.

Take into consideration the first smackdown at the Apex fleet. According to the Congressional Budget Office, which examines Navy costs, each ship could cost about $1.2 billion. And that changes depending on the weight and the model. So imagine how much damage Godzilla did when he sliced through ships like butter with his spikes and his tail?

Oh and imagine the cost of a ship that could carry Kong? That ship has to be in the multiple billions with enough storage for food to keep this bad boy happy. And that doesn’t take into consideration who built those chains and how much material went into making them strong as hell. Did they use vibranium? (Different worlds, but still had me wondering.)

And that doesn’t take into consideration fuel, food, supplies, and more to get these things functional and moving. Then there’s the human cost. How many people were employed on these ships? How much were they paid? What was the situation with help for their families when they didn’t return home?

Now, just to clarify, I don’t want to be a killer of joy, and I certainly enjoyed watching this destructive showdown. This is just how my mind works, and I feel like an old grandma pointing out how much things cost and who’s going to pay for that. But believe it or not, this is fun for me and there’s at least someone in your friend group who thinks the same way.

Then there’s the smackdown in Hong Kong. This city is ranked one of the most expensive cities in the world in which to rent, according to Culture Trip. And the main island, where the financial and commercial districts are and where Godzilla and Kong had their main smackdown, is full of expensive homes and businesses.

And even though upscale residential neighborhoods are located uphill and away from the busiest parts of the city, an apartment in Hong Kong can be around $3,000 to $6,000 a month, according to Asiaxpat. Now imagine the cost of 9,000 high rises with over 4,000 skyscrapers standing taller than 100m (328ft), with 480 buildings above 150 m (492ft)?

That’s exactly where Godzilla, Kong, and Mechagodzilla had their epic battles! When they weren’t shoving each other through buildings, they were using them to swing from one to the next. And when they weren’t doing that, they were using their atomic/laser breath to destroy property from here to kingdom come. And again, what of the lost human lives here and those who may have depended on them? What kind of assistance are they given?

Does that make me feel old that that was the main thing I was thinking about while watching Godzilla vs. Kong? Yes. Will I stop thinking about it now that I’ve done the research? Absolutely not. If anything, I think I’ve gotten more concerned at the structural and economic integrity of these places and who rebuilds them after the titans are done fighting.