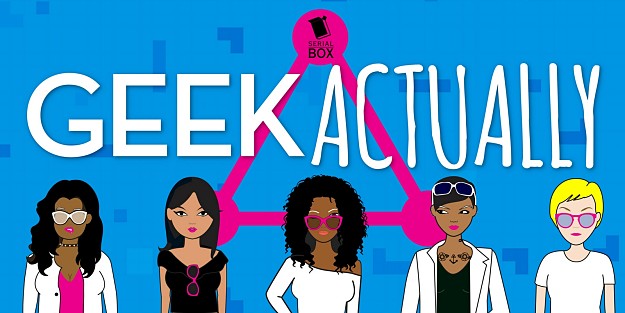 With podcasts and audiobooks taking over the way we consume media, it is no surprise that people are going to be applying the same serialized long-form online/audio storytelling to prose fiction. Serial Box is leading the charge with several serialized stories across multiple genres. Among them is the geek-girl delight Geek Actually.

Geek Actually is written by four female authors who are experienced in everything from romance to paranormal sci-fiction to sports writing. It is a fun, diverse story that takes the best elements of Living Single and threads it together with genuine geek-girl elements that make the characters feel relatable and fun.

Our heroines are Aditi Sodhi, a YA sci-fi author who is struggling to finish her second novel while still promoting the first one as her anxiety begins to mount; Michelle Andrade, who lands a successful promotion at the same time her husband blindsides her with a divorce; Michelle’s half-sister, Christina Weber, is a lesbian who begin a relationship with starlet that creates a shit-ton of drama in her usually drama-free life;  Taneesha Adams, a black video game coder struggling to gain respect in a field that is content to simply tokenize her; and finally, Elli, the “Hannah” of the series, who is has spent her entire adult life living on the internet instead of getting out of her parents’ house.

What is really fun about this series is not just the friendship between the women, but also the genuine sense of nerd. Shows like The Big Bang Theory use nerdiness as a gimmick to add “color” or signify aspects of the character without actually doing any work. There is no Doctor Who/Star Trek/Star Wars/Firefly crossover joke with no point to it.

Instead, Geek Actually reads like a loving tribute to the women in those spaces who are occupying it by people who have been steeped in the culture for a long time. Especially Taneesha since I never really hear anything about women of color, especially black women in fields like coding. I appreciate that the authors have taken the time to explore the places of women who are just geeks, but working to create geek culture from the ground up.

I especially enjoy how technology plays a role in the story. In today’s world more than ever we connect to people from all over the country and globe, forming friendships that can be even more meaningful than those we have in our daily grind.

While it is strange to see serial stories making a comeback, I think that Geek Actually is a fun way to interact with it. Right now on the website, you can read a preview of the series’ “pilot” episode and get a taste of it.

If you crave diverse stories about women not just in the genre of science-fiction, but actually of women who work in those fields, this is an excellent Christmas gift for yourself.

Not to mention it is very sexy, and who doesn’t love a little taste of erotica on these cold winter nights. It’s cuffing season after all.